Developing a suitable hydrogen peroxide (H2O2) sensor able to measure small concentrations of H2O2 in-operando within a fuel cell is crucial to understanding the degradation mechanisms that take place in a Membrane-Electrode-Assembly of a PEM-fuel cell. Recently, fiber optic sensing probes based on Prussian blue (PB) have shown reliable response to H2O2 concentrations [1, 2], paving the way for further investigation inside operating PEM-fuel cells. This requires deposition of a robust PB film able to sustain the harsh environment of PEM-fuel cells. In this work, Prussian blue films have been deposited at different synthesis temperatures, and using different precursors including potassium ferrocyanide, potassium ferricyanide, iron chloride (III), and tetraethyl orthosilicate. The samples were immersed and left in a Phosphate Buffer Solution (PBS) of pH 2 at 80 °C for 21 hours and, in thereafter at 90 °C for 3 hours. These PB films were characterized using Fourier Transform Infrared Spectroscopy to analyze their adhesion properties following PBS processing at operating temperature and pH corresponding to an operating PEM-fuel cell.

PB films were deposited on microscopic glass slides using three different processes including; (a) the sol-gel process and dip coating technique, (b) chemical deposition of PB using potassium ferrocyanide and iron chloride (III), and (c) single-source-precursor deposition of PB using potassium ferricyanide. All three processes were performed in an aqueous solution of 0.1 mol L-1hydrochloric acid at 60 °C and the prepared samples were dried first at room temperature and then at 100 °C for 15 min.

To study the effect of synthesis temperature on adhesion properties of PB films, several more samples were prepared through the single-source-precursor route at temperatures of 40 °C, 60 °C, and 80 °C.

Two samples were prepared under each condition, with one sample subjected to PBS processing and followed by characterization of both samples using FTIR to study the effect of deposition process and synthesis temperature on adhesion properties of PB films.

This work was supported by the German Academic Exchange Service (DAAD), and through a Strategic Research Grant from the Natural Science and Engineering Research Council (NSERC) of Canada. 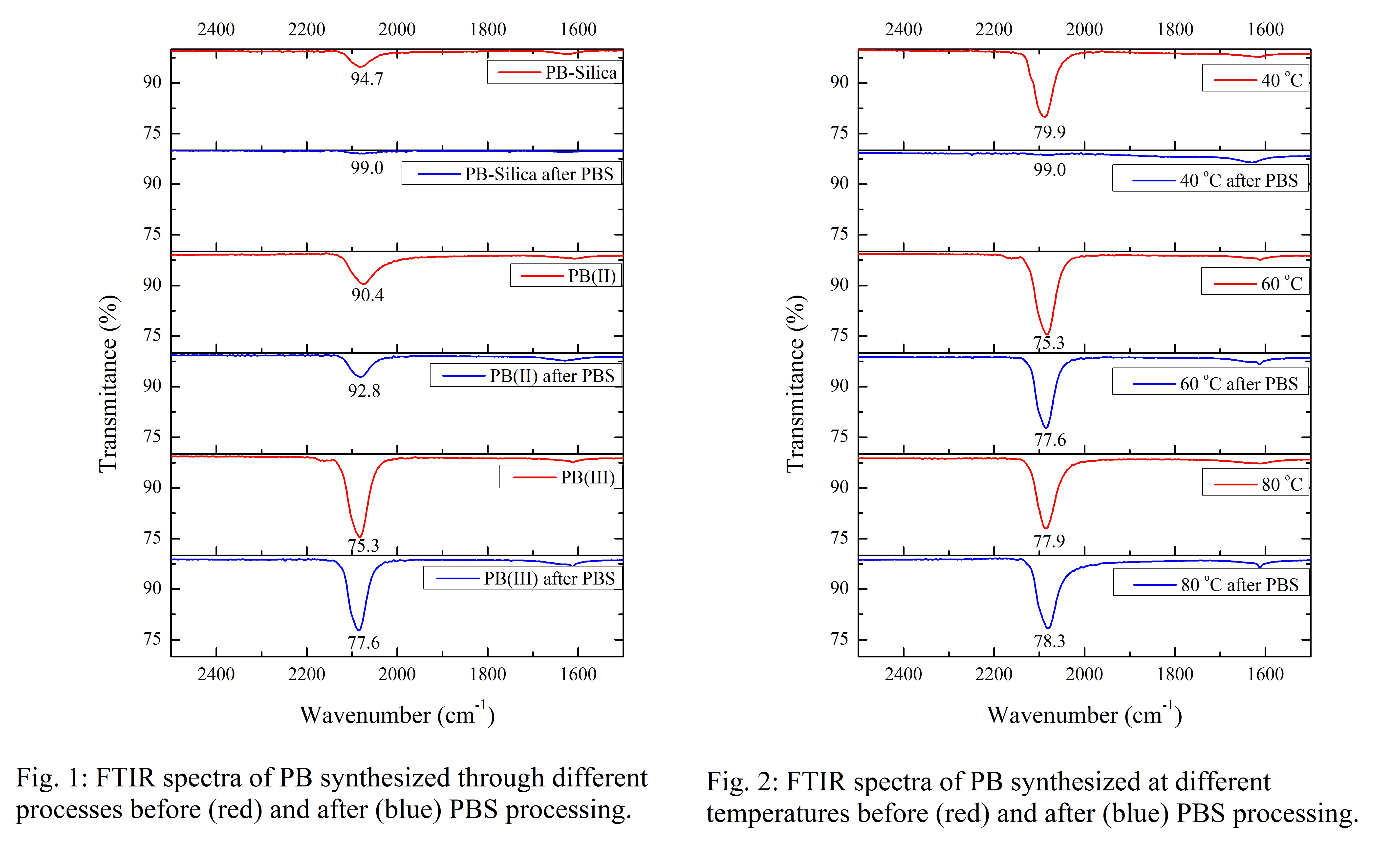