Approximately 260,000 tons of scallop shells become industrial waste[1] every year in Japan. So far, attempts to reuse the shells have been mainly limited to the commercial production of CaCO3. Currently, almost all CaCO3 in Japan is produced from limestone. Each year in Japan, 200 million tons of limestone is mined[2]. CaCO3 produced from limestone is less expensive than that produced from scallop shells. There are no obvious economical benefits to using scallop shells as a source of CaCO3. Therefore, we are attempting to find a new value added use for scallop shells as an advanced functional material. In previous experiments[3], we have been trying to use calcined shell powder to extract alkaline metal and alkaline-earth metal from seawater.

The tsunami of March 11, 2011, caused severe damage to the Fukushima nuclear power plant. Today, many problems still exist, but a particularly serious problem is the leakage of highly toxic contaminated water. Within the storage tanks, there remains a large quantity of contaminated water. This water contains radioactive Sr2+ and Cs+. Sr2+ tends to accumulate in bones and is believed to because of bone cancer. Therefore, it is highly desirable to develop a method for the removal of Sr2+ from the contaminated water. Here we will show the potential of scallop shells to adsorb Sr2+ from the solution.

First, we crushed the shells using a stamp mill and an automatic grinder. Next, we classified the shell powder by sieves according to their diameter. Then, we put the shell powder into a beaker with a solution (including Sr2+) and stirred it. Finally, we measured the Sr2+ concentration by Atomic Adsorption Spectrometer (AAS) (Thermo, iCE3300). We compared the Sr2+concentration in the solution both prior to and then again after it was stirred.

We calculated the amount of substance from the concentration of solution measured by AAS. The amount of both the Sr2+ and the Ca2+ was plotted against the stirring time. In Fig.1, which is the solid line, we were able to observe a clear decrease in Sr2+ amount. In Fig.1, which is the dotted line, we witnessed a marked increase in Ca2+ amount. Both, the decreasing Sr2+ and increasing Ca2+, were directly related to the amount of time spent stirring. We assumed that Sr2+ substituted with Ca2+ of the CaCO3 which is the main component of the shell. We were then able to conclude that this is the reason why the amount of Sr2+ was reduced.

According to the XRD pattern shown in Fig.2, it was clear that the scallop shell and CaCO3 have almost the same crystal structure.

There are no differences between scallop shells and CaCO3 as far as crystal structure is concerned. The morphology of the inner surface of the shell is shown in Fig.3. A micro column structure of the scallop shell was observed on it. This structure is supposed to be an important factor for the adsorption of Sr2+. 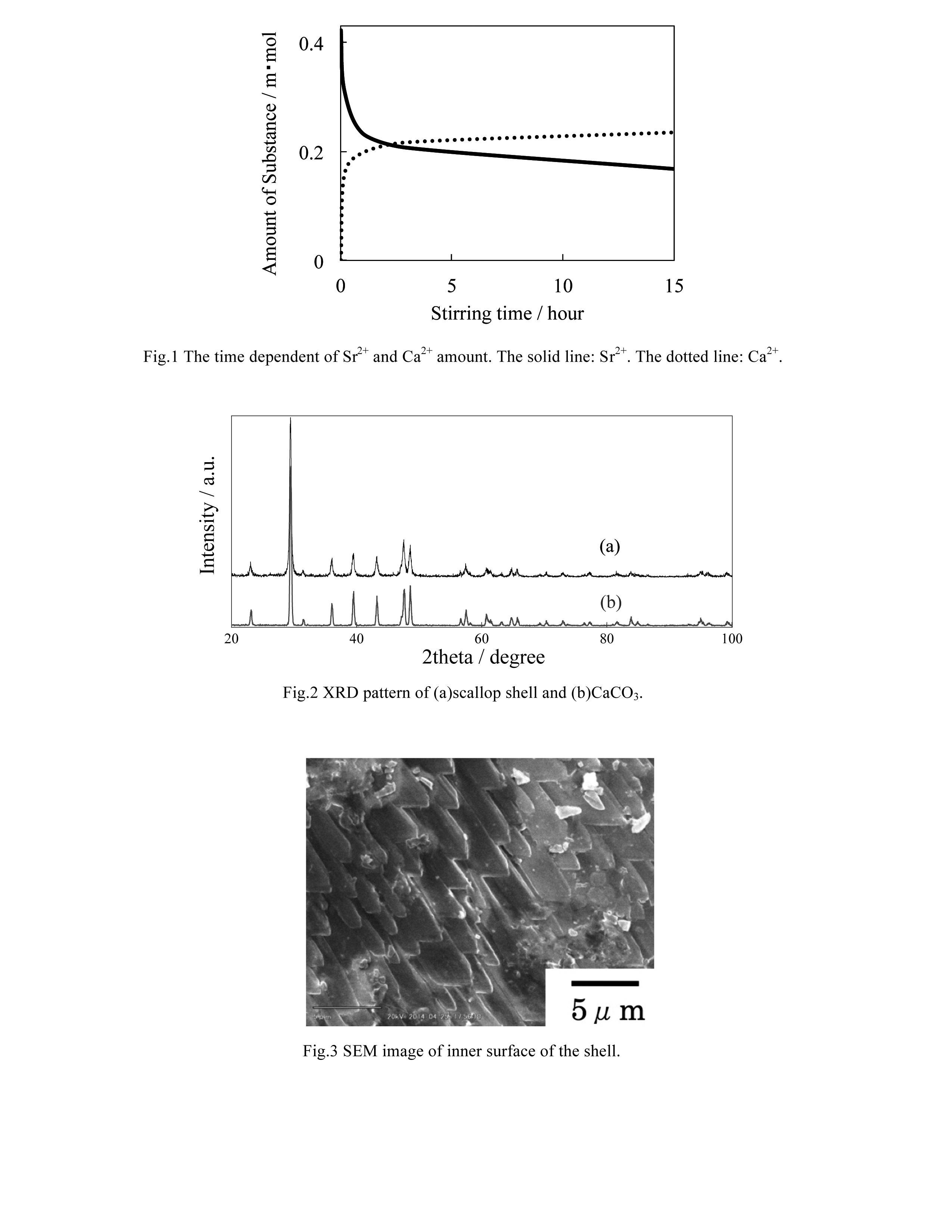