Williford Room B (Hilton Chicago)
D. Yamane (Tokyo Institute of Technology, CREST, JST), T. Konishi (NTT Advanced Technology Corporation), H. Toshiyoshi (The University of Tokyo, CREST, JST), K. Masu, and K. Machida (Tokyo Institute of Technology, CREST, JST)
MEMS (microelectromechanical systems) inertial sensors, such as MEMS accelerometers and gyroscopes, have now been in widespread use as a variety of applications such as automotive, industrial, healthcare, and consumer use and so forth. The driving force behind the emergence of the inertial sensors is the development of silicon MEMS technology [1] that has enabled us to miniaturize all the mechanical components down to micro-meter scale. In addition, by taking the advantage of semiconductor manufacturing process, low production cost and high functionalities has also been achieved, which succeeded in commercializing MEMS inertial sensors.

In this talk, we show our recent research progress of highly-sensitive MEMS accelerometer for monitoring micro motion at the level of sub-1G (1 G = 9.8 m/s2) acceleration for CMOS-MEMS accelerometer.

From the view point of inertial force, commercially available sensors deals mostly with more than 1 G. On the other hand, demands are escalating for the accurate sensing of sub-1G acceleration for the precise monitoring of human and non-human objects. The major challenge for sensing sub-1G region is to reduce the thermo-mechanical noise [2], as it is called Brownian noise (BN). BN dominates the sensor noise that degrades the sensing resolution, and the magnitude of BN is inversely proportional to the proof mass;increasing the density of the proof mass is an effective way to suppress the BN without compromising the device footprint. According to the above background, we have utilized gold as a material of the proof mass. As shown in Fig. 1, the density of gold is nearly an order of magnitude higher than that of silicon used as a standard material of proof mass, and therefore the BN can be small enough to detect below 1 G with high resolution even when the sensor size is as small as silicon MEMS accelerometers.

Along with the material consideration, we have also developed the fabrication process for single chip integration with the MEMS structures and the sensing circuitry, as schematically described in Fig. 2; this solution is beneficial not only to eliminate the parasitic effects but also to efficiently save the chip footprint in contrast to multi-chip integration or other CMOS-MEMS approaches that separate the chip area depending on the functionalities. Toward the proposed sensor design, we have employed the post-CMOS process [3] using gold electroplating, which can implement the sensor onto CMOS chip. Efforts are being made for the electroplated gold to increase the thickness for large proof mass and to laminate multiple layers to enhance the design flexibility.

Proof-of-concept devices have been produced on silicon substrate, as the one of them is seen in Fig. 3(a) and (b), by using the aforementioned microfabrication techniques, and the BN was estimated to be less than 1 µG/Hz1/2[4]. By stacking multiple layers, all the mechanical components, such as the mechanical springs and the stoppers have been designed by optimizing each layer thickness. The capacitance shift associated with input acceleration below 1 G was also measured on the device to evaluate the potential of capacitive accelerometer.

The presentation will cover the design, fabrication process, and measurement results of the MEMS devices for sub-1G sensing. 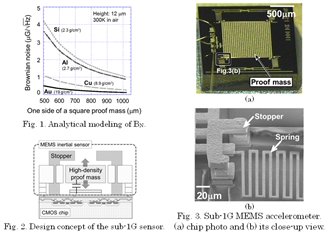