Salon C (Hilton Chicago)
A. A. Al-Musa, M. Al-Saleh (King Abdulaziz City for Science and Technology), A. Al-Zahrani (king abdulaziz city for science and technology), N. Kaklidis (University of Western Macedonia), and G. Marnellos (Centre for Research & Technology Hellas, University of Western Macedonia)
The worldwide demand for energy is continuously growing and is expected to be met largely by fossil fuels. However, several aspects related to i) the depletion of fossil fuels, ii) the environmental and public health concerns arise from the associated emissions, and iii) the lower energy conversion efficiency in conventional power plants, render the development of alternative, energy-efficient technologies increasingly demanding.

Fuel cells have emerged as a promising energy conversion technology, able to satisfy the needs of high efficiency and low environmental footprint [1]. Although H2 can be considered as the ideal fuel cell feedstock, several barriers dealing with its limited availability in nature as a free substance, the absence of relevant infrastructure and the associated difficulties with its storage and distribution prevent the development and commercialization of H2-fed fuel cells [2].

Commercial-grade liquid hydrocarbons, such as gasoline, comprise the most proper feedstock for on-board reformation into hydrogen, due to their well-established infrastructure for storage and transportation. SOFCs due to their high operating temperature, can be potentially operated directly (internal reforming) on conventional hydrocarbons fuels [2]. However, the development of high efficiency electro-catalysts, with adequate activity, electron conductivity and carbon tolerance should be developed.

Ni-based anode materials are usually employed in SOFC applications, since they exhibit adequate catalytic activity toward reforming reactions and thermal stability [3]. However, Ni-based anodes are prone to carbon poisoning when directly exposed to hydrocarbon fuels [3]. Recently, the substitution of Ni cermets by Cu-based catalysts in direct hydrocarbons fuel cells has been proposed, owing to their electrochemical activity and resistance to carbon [2]. It has been demonstrated that the employment of Cu-CeO2/YSZ composites as anode materials results in a stable power generation in direct hydrocarbons fuel cells [2].

In the present communication, iso-octane, a common surrogate for gasoline, is employed as a fuel in a Cu-CeO2/YSZ/Pt type SOFC reactor, at atmospheric pressure. The effect of cell temperature, reactants’ partial pressure and imposed overpotentials on products’ distribution and overall catalytic and electro-catalytic activity was examined. Furthermore the as prepared cell was electrochemically characterized employing typical fuel cell measurements and AC impedance spectroscopy studies.

Iso-octane was efficiently reformed by H2O to syngas over Cu/CeO2 electrodes. In all cases examined, no carbon was detected, which was attributed to the favoured gasification of carbonaceous deposits by H2O. Cu-CeO2 exhibited high catalytic activity toward the electro-oxidation of all combustible species that are present at the anode. Under “fuel cell” mode of operation, the achieved power densities were substantially increased with increase in temperature and Pi-C8H18/PH2O feed ratios (Fig. 1). AC impedance spectra showed contributions both from charge and mass transfer processes depicted at high and low frequencies, respectively. Increase in temperature reduced both the Area Specific Resistance (Eact= 1.15 eV) and interfacial resistance, with the latter being attributed to charge transfer processes (Eact= 1.59 eV) and diffusion limitations (Eact= 1.07 eV). The effect of H2O and i-C8H18 concentrations was more intense in the case of the resistance associated to mass transfer limitations, while both the ASR and the resistance attributed to the charge transfer processes at electrode and electrode/electrolyte interface were almost independent of reactants feed concentration. 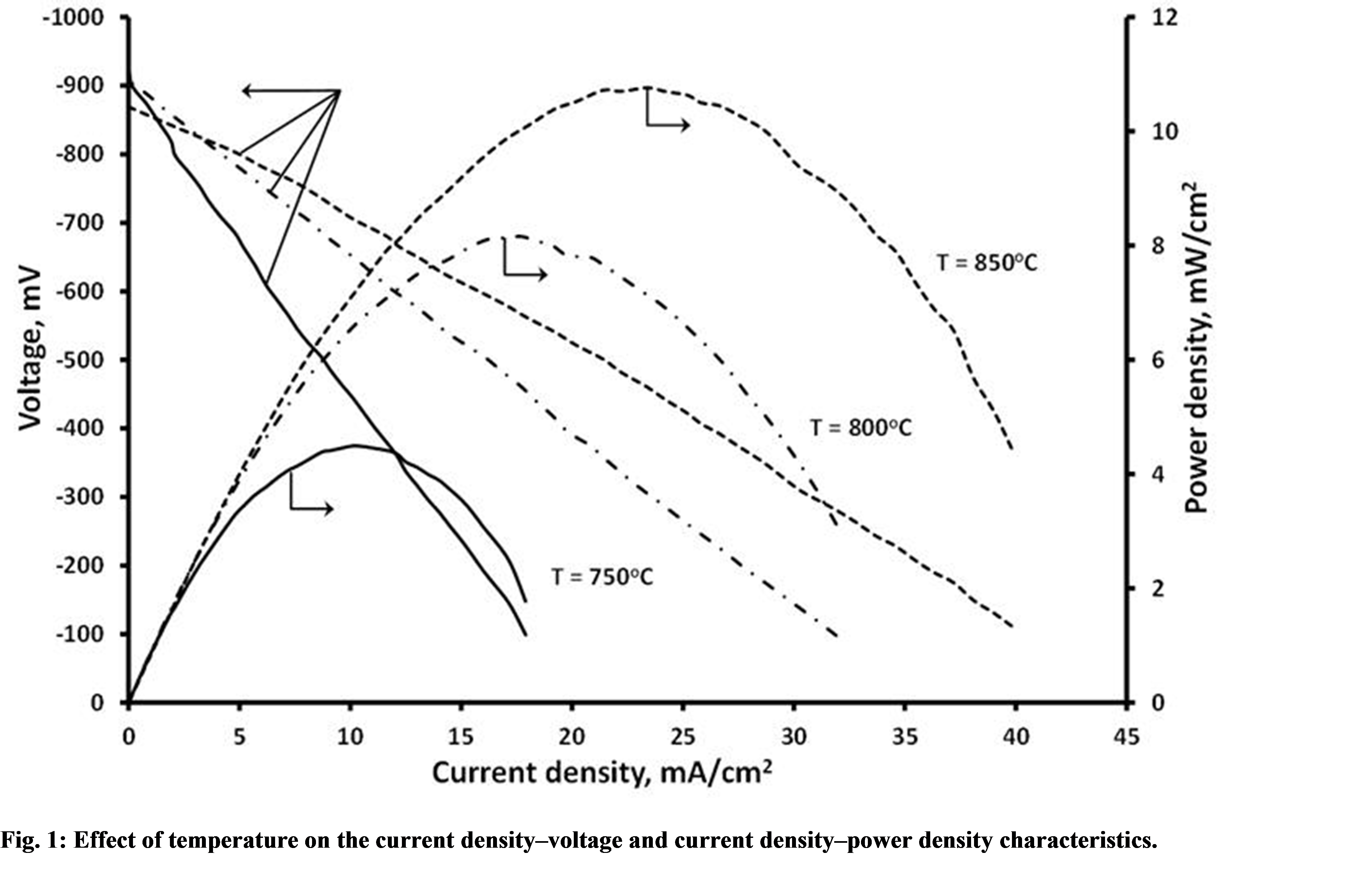