Conference Room 4D (Hilton Chicago)
D. Esposito (National Institute of Standards and Technology, Columbia University), N. Y. Labrador (Columbia University), Y. Lee, V. Szalai (National Institute of Standards and Technology), A. A. Talin (Sandia National Laboratories), and T. P. Moffat (National Institute of Standards and Technology)
Photoelectrochemical (PEC) water splitting is a promising route to solar-driven H2 production, but the efficiency and stability of semiconducting photoelectrodes must be improved for commercialization of this technology. Among the many challenges of developing and optimizing durable and efficient photoelectrode materials are the inherent complexities that arise from the heterogeneous nature of many real-world materials.  For example, the surface of a given photoelectrode can possess substantially different crystal phases and orientations, composition, morphology, dopant distribution, defect structures, and more. Different structures and compositions can have vastly different optical, electronic, and catalytic properties, resulting in a photoelectrode whose macro-scale properties and performance is often a complex convolution of the properties and performance of the micro- and/or nano-scale regimes that comprise it. Being able to establish the structure-property relations that exist on these heterogeneous surfaces is therefore of great importance for optimizing photoelectrode performance.

Fortunately, there are several complementary experimental techniques that can be used to analyze the spatial variation in performance and properties of photoelectrodes at the micro- or nano-scale.  In this work, we have used two scanning probe techniques to investigate spatial variation in the optical, electronic, and catalytic properties of p-Si-based photocathodes (Fig. 1). The first technique is scanning photocurrent microscopy (SPCM), a technique in which a laser beam is focused onto the photoelectrode surface, resulting in a “local” photocurrent that is measured by a potentiostat. Using a nano- or micro-positioning stage, the position of the laser beam is scanned across the sample surface while recording change in local photocurrent. The second technique employed in this work is scanning electrochemical microscopy (SECM), in which an ultramicroelectrode (UME) is used to monitor spatial variation in the concentration of product species evolved from the photoelectrode surface.  For our work on p-Si photocathodes, a positive potential is applied to the UME such that the H2 evolved from the photoelectrode surface is oxidized, resulting in an electrical current in the UME (JUME). This current is proportional to the amount of H2 evolved from the photoelectrode surface in the vicinity of the UME and therefore strongly reflects the catalytic activity of the surface positioned beneath it.

As a platform for these SPCM and SECM investigations, our work has focused on the study of p-Si-based photocathodes for H2 evolution based upon the metal-insulator-semiconductor (MIS) architecture that have demonstrated great potential for highly efficient and stable solar water splitting.(1,2,3,4) Our studies have involved both planar (Fig. 2c) and 3D-structured MIS photoelectrodes (Fig. 2a). SPCM and SECM have been used to investigate spatial variation in performance relating to 3D structuring (Fig. 2b), intentionally introduced defects (Fig. 2d), and more. Knowledge gained from these micro-scale measurements is shown to be invaluable for i.) engineering more efficient photoelectrodes, and ii.) developing a deeper understanding of fundamental optical, electronic, and catalytic phenomena in MIS photoelectrodes. In addition to presenting results from the application of SPCM and SECM to the study of p-Si MIS photocathodes, this talk will also highlight the challenges and opportunities for applying these techniques more broadly to the field of photoelectrochemistry. 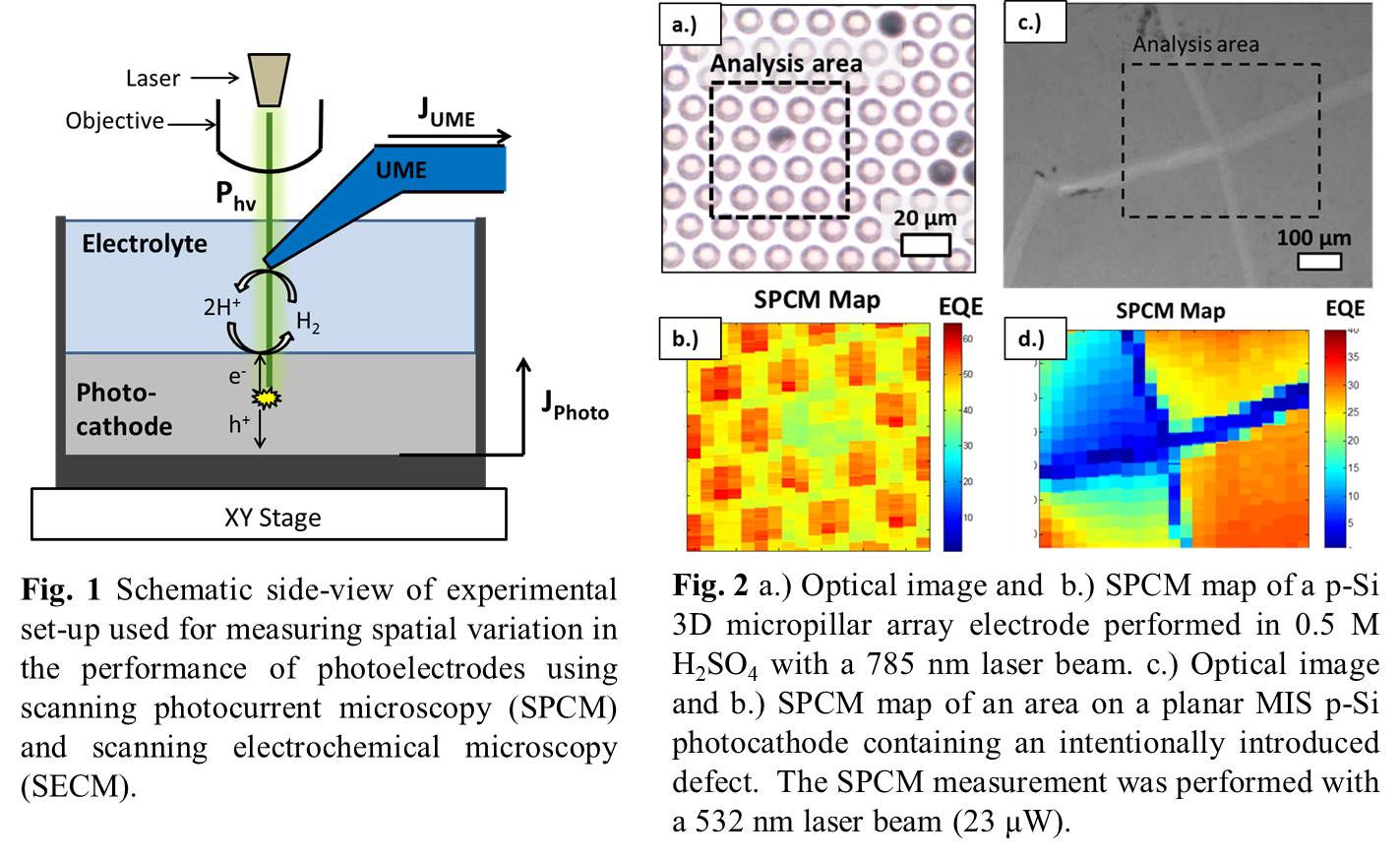