Lake Michigan (Hilton Chicago)
R. A. Ghiladi (North Carolina State University)
Dehaloperoxidase (DHP) from the terebellid polychaete Amphitrite ornata is the first oxygen-binding globin that possesses a biologically relevant peroxidase activity. The two known isoforms of DHP, A and B, have been shown to oxidize trihalophenols to dihaloquinones in a dehalogenation reaction that utilizes hydrogen peroxide as the oxidant. More recently, however, we have shown that DHP possesses both peroxygenase and oxidase activities using a new class of substrate, haloindoles, in addition to its previously identified O2-binding and peroxidase functions. Using 5-Br-indole as a representative substrate, the major monooxygenated products were found to be 5-Br-2-oxindole and 5-Br-3-oxindolenine. Isotope 18O-labeling studies confirmed that the oxygen atom incorporated was derived exclusively from H218O2, indicative of a previously unreported peroxygenase activity for DHP. Peroxygenase activity could be initiated from either the ferric or oxyferrous states with equivalent substrate conversion and product distribution. It was found that 5-Br-3-oxindole, a precursor of the product 5-Br-3-oxindolenine, readily reduced the ferric enzyme to the oxyferrous state, demonstrating an unusual product-driven reduction of the enzyme. As such, DHP returns to the globin-active oxyferrous form after peroxygenase activity ceases. Reactivity with 5-Br-3-oxindole in the absence of H2O2 also yielded 5,5’-Br2-indigo above the expected reaction stoichiometry under aerobic conditions, and O2-concentration studies demonstrated dioxygen consumption. Non-enzymatic and anaerobic controls both confirmed the requirements for DHP and molecular oxygen in the catalytic generation of 5,5’-Br2-indigo, and together suggest a newly identified oxidase activity for DHP. Preliminary data also suggest that DHP is able to catalyze the oxidation of 2,3-dimethylindole by a previously unreported oxygenase activity. The two major products were identified by HPLC and LC-MS analysis to be the dioxygenated product o-acetamidoacetophenone and the monooxygenated product 3-hydroxy-2,3-dimethylindole. Isotope labeling studies verified that the oxygen atom incorporation into the products were derived exclusively from molecular oxygen. Consistent with these results, the reaction did not proceed under anaerobic conditions, and was also decreased in the presence of radical scavengers. Our initial studies suggest that the observed radical-based oxygenase activity of DHP is reminiscent of lipoxygenase, a non-heme dioxygenase. The breadth of chemical reactivity demonstrated by DHP not only expands our current understanding of this multifunctional enzyme, but also highlights the plasticity of a single heme active site within a globin-fold to function as an oxygen-transport center, as a peroxidase for phenolic substrate oxidation, and as a peroxygenase for indolic substrate oxygenation. 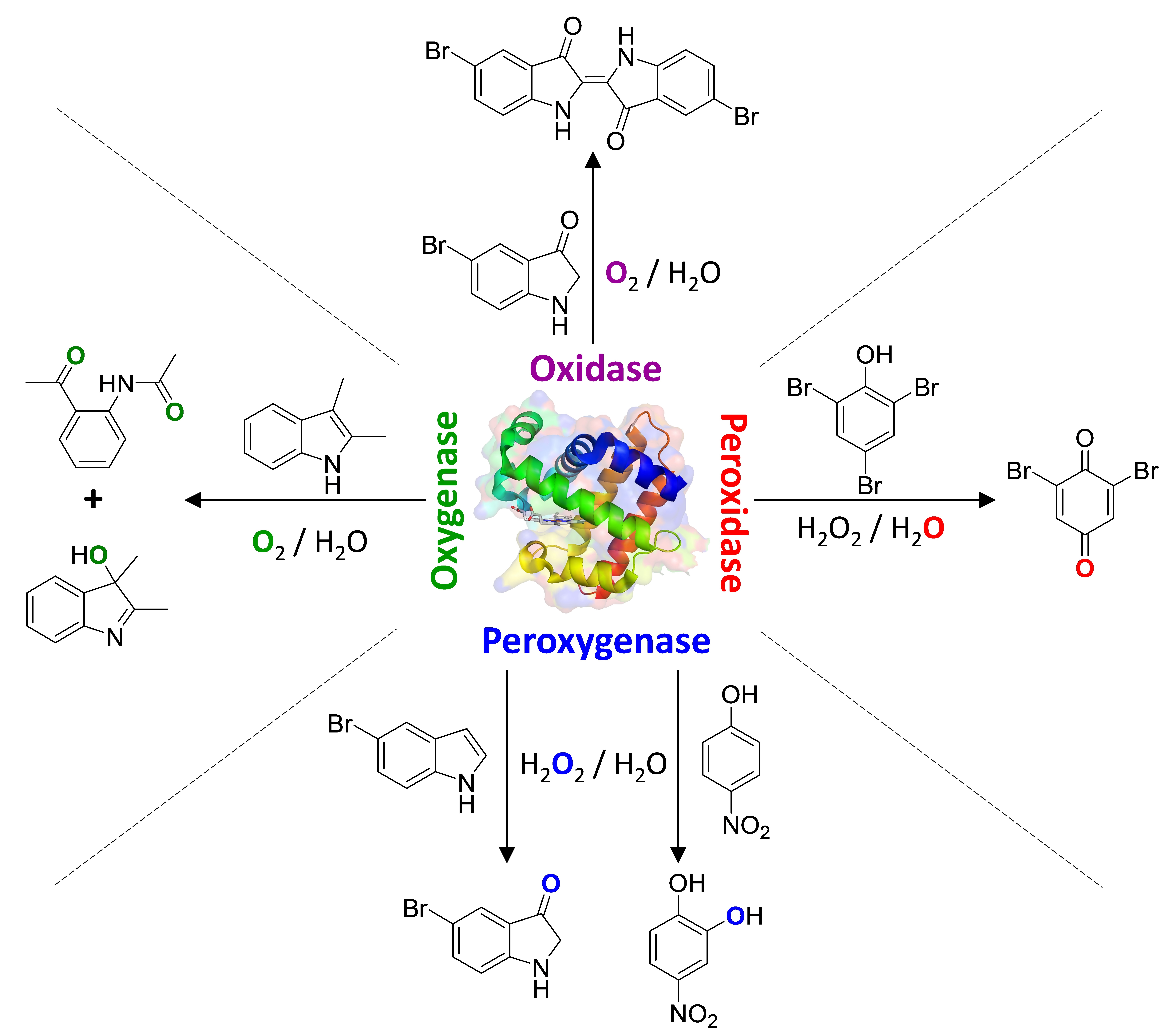