Boulevard Room B (Hilton Chicago)
S. M. Babiniec (Mechanical Eng. Dept., Colorado School Of Mines), M. Dippon (KIT, Karlsruhe), S. Ricote, and N. P. Sullivan (Mechanical Eng. Dept., Colorado School Of Mines)
Planar, fuel electrode-supported cells were fabricated utilizing a thin (~25 μm) BaCexZr0.9-xY0.1O3-δ electrolyte on a 1-mm-thick BCZY27/Ni fuel electrode [1]. Three electrolyte compositions were studied: x = 0, 0.1 and 0.2 referred to as BZY10, BCZY18 and BCZY27 respectively. Two different air electrodes were prepared: painted Au or a 40-μm-thick porous BCZY27 backbone infiltrated with La2NiO4+δ nano-particles as an electro-catalyst. As shown in Figure 1, which is an example of the cell microstructure for the infiltrated backbone, the adhesion between the electrolyte and the electrodes as well as the density of the electrolyte are satisfactory.

These devices were tested over a wide range of conditions. Both fuel-cell and electrolyser modes of operation were explored over a range of temperature spanning 550-750 °C. Flux of hydrogen was continuously monitored with a gas chromatograph and a mass spectrometer in parallel. Figure 2 displays the hydrogen fluxes in electrolysis operation measured with a BCZY27 electrolyte at 700 °C with 5% H2, 3% H2O (balance Ar) at the fuel electrode and 21%, 7% H2O (balance Ar) at the air electrode. The measured hydrogen fluxes are far below the Faradaic fluxes. The difference between the measured fluxes and the Faradaic fluxes increases with increasing current. Similar results were reported by Sakai et al. [2] and Matsumoto et al.[3].

Oxide ion conduction is negligible as no increase of steam content was measured at the fuel electrode. Therefore, the low Faradaic efficiency can only be compensated by an electronic leakage. This work draws a comparison of the hydrogen fluxes with the percentage of cerium in the BaCexZr0.9-xY0.1O3-δ membrane. 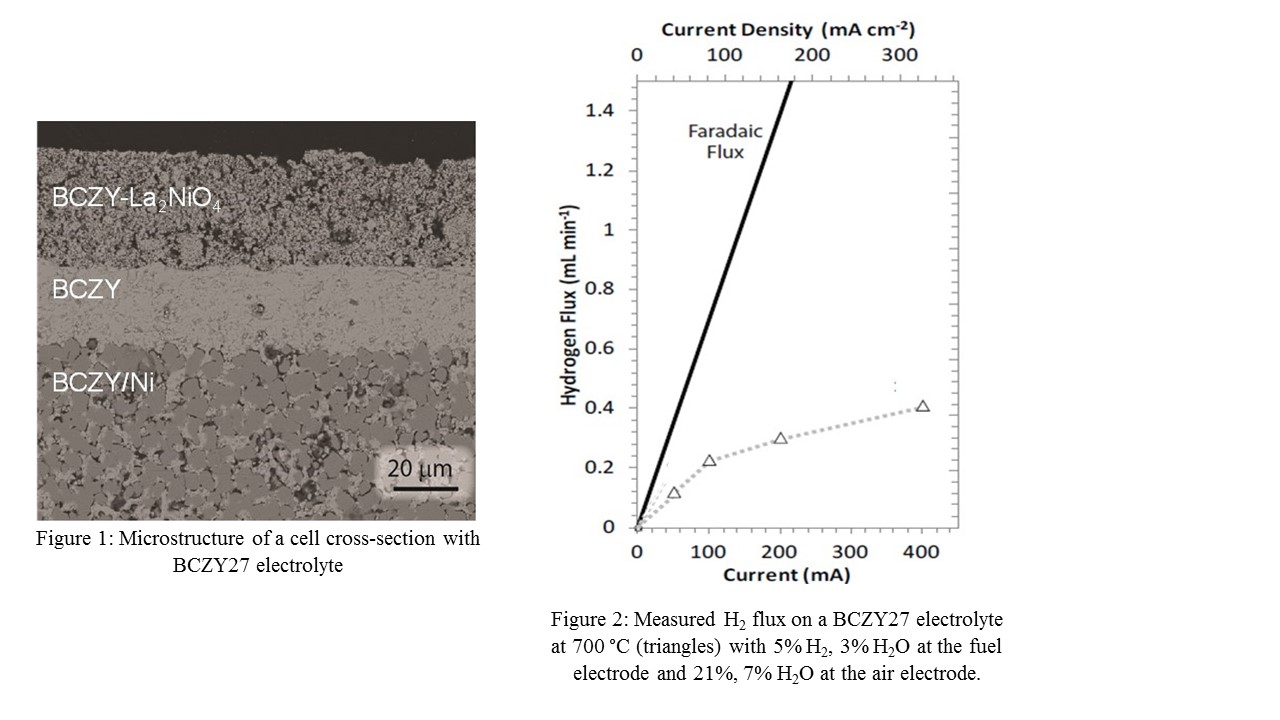