PDR 4 (Hilton Chicago)
L. Yang (imec, Vrije Universiteit Brussel), A. Radisic (imec), J. Deconinck (Vrije Universiteit Brussel), and P. M. Vereecken (imec, Centre of Surface Chemistry and Catalysis, K.U. Leuven)
Organic additives used in Cu electroplating for IC interconnects have been studied extensively due to their pivotal roles in the void-free filling of recessed features. The suppressive additives are typically polymers or co-polymers with variable molecular weight (MW). The properties of these additives, as well as their interaction with accelerator, vary with the monomer type and the MW. As the additives are typically treated as indivisible molecules in the analysis of the filling mechanism, these variations are typically quantified by the difference in some coefficients that characterize the additive behaviors, such as adsorption / desorption rates and suppression strength. As an example, polyethylene glycol (PEG) with a larger MW would have a higher adsorption rate and exhibit stronger suppression effect than PEG with a smaller MW. However, since these large molecules consist of multiple identical building blocks from the polymerization of one or more monomer species, the behavior of the molecule as a whole depends on the number and type of the monomers. In order to understand such an intrinsic dependency and the resulting differences in additive properties, stochastic modeling was applied in the study of suppressor additive and its interaction with accelerator [1]. Using PEG and SPS as the model chemicals, a stochastic model was developed to simulate the transient processes in Cu electroplating, e.g. cyclic voltammogram (CV) under various conditions. Simulations were performed for both suppressor-only cases and suppressor-accelerator interactions. The dependency of PEG adsorption / desorption and PEG-SPS interaction on various factors, including bath composition, scan rate and molecular weight, was simulated and compared with the corresponding experimental measurements. An overall good qualitative match was shown in the comparisons. Figure 1 shows simulated CVs under two very different conditions. At higher SPS/Cl‑ concentrations, case (a) demonstrates the PEG-SPS interaction, which has been known to be important for the super-conformal filling of trenches [2, 3]. At lower SPS / Cl-concentrations, case (b) demonstrates the critical desorption behavior of PEG as a suppressor, which has been shown to be important for the fast bottom-up type filling of high aspect ratio TSVs in damascene copper plating [4]. Since the proposed model provides a unified approach to simulate both the suppress-accelerator interaction and the critical desorption behavior of suppressors, it enables the development of general-purpose multi-scale simulation programs for the filling of various recessed features within a wide length-scale range covering both the Damascene interconnects and TSVs. 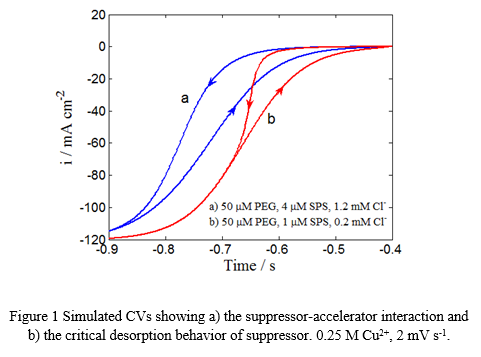