Conference Room 4D (Hilton Chicago)
M. Higashi, T. Shirakawa, and R. Abe (Kyoto University)
Photocatalytic water splitting using semiconductor materials has been attracting much attention due to the potential for the clean production of H2 from water using solar energy. Most of metal sulfide semiconductors, such as CdS, possess appropriate band levels for water reduction and oxidation as well as a narrow band gap allowing visible light absorption because the valence bands of them are mainly formed by S 3p orbital. However, the most of sulfides have no capability of O2 evolution from water due to the occurrence of self-oxidative deactivation by photogenerated holes. Even for the sacrificial H2 evolution, they require particular electron donor such as S2– and SO32– to generate H2 stably. In the present study, we attempted to combine some sulfides such as CdS with various reversible electron donors in order to develop two-step water splitting systems based on sulfide photocatalysts. We found that Pt/CdS can oxidize [Fe(CN)6]4– and generate H2 stably, and combining it with an O2 evolution system (TaON photoanode1)) enabled us to split water into H2 and O2 under visible light irradiation (Fig. 1). 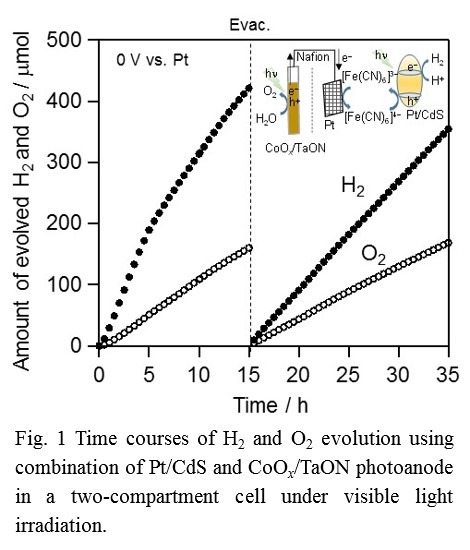