Marquette (Hilton Chicago)
F. I. Chowdhury, K. Islam (Masdar Institute of Science and Technology), S. Alkis (Bilkent University), B. Ortaç (Material Science and Nanotechnology, Bilkent University), M. Alevli (Department of Physics, Marmara University), N. Dietz (Georgia State University), A. Okyay (UNAM), and A. Nayfeh (Masdar Institue of Science and Technology)
Thin film solar cells have gained a lot of attention due to the reduced material cost.  However, decreasing the thickness reduces the overall current the solar cell can generate. As a result, the use of nanoparticles to improve the performance of thin film solar cells is a topic of increased research and interest [1, 2]. Semiconductor nanoparticles allow the absorption of photons of higher energy and emission of photons of lower energy. In this work, the effect of luminescent indium nitride nanoparticles (InN-NPs) spin coated on top of thin film a-Si:H solar cells is studied.

The generation of InN-NPs was carried out using a nanosecond pulsed ND:YLF laser operated at 527 nm with pulse duration of 100 ns and a pulse repetition rate of 1 kHz. The laser beam was focused on HPCVD grown InN sample [3] target containing 20 ml pure ethanol using a plano-convex lens with a focal length of 50 mm. InN-NPs are spherical and are within 3.24-36 nm size range with an average size of 16 nm. After that, a-Si:H solar cells (fig. 1a) were fabricated which is a stack of 20 nm heavily doped p-type a-Si, 100 nm undoped a-Si, 20 nm heavily doped n-type a-Si and 80 nm ITO is grown on a p+ type Si substrate. The n+, p+ intrinsic layers and ITO were grown by PECVD [4]. Finally, silver was deposited to form the contacts. InN-NPs in ethanol solution were then spin coated on top of ITO. The average Jsc of InN-NPs coated cells was found to be 6.76 mA/cm2 which is 16.69% higher than the reference cells which had an average Jsc of 5.79 mA/cm2. Figure 1b plots J-V curves of the best performing cell coated with InN-NPs. Average efficiency of InN-NPs coated cells was found to be 3.79% which is 14.16% higher than the average efficiency of the reference cells which was 3.32%. The fabricated cell with InN-NPs also shows an improved spectral response compared to reference cell (fig. 1c). The peak EQE was 51.67% at 510nm for the cell with InN-NPs, while the reference cell had 44.8% peak EQE at 500nm. The reflectivity of the cells were measured (fig. 1c inset) and it was found that InN-NPs coated cells show lower reflectivity from 500nm onwards compared to the reference cell. Coating the cell’s surface with InN-NPs makes the surface rougher thus enhancing surface scattering which is the reason for lower reflectivity. The IQE of the cells were calculated afterwards and for InN-NP coated cell peak IQE was found to be 68.38% at 500nm, while the reference cell had 51.70% peak IQE at 510nm.

In order to understand the physics of the efficiency increase, IQE and EQE were further analyzed. Figure 1d shows the change in IQE and EQE vs. wavelength of the InN-NPs coated cell compared to reference cell. For InN-NPs coated cell, fig. 1d shows that the EQE change is larger between 510nm-700nm compared to IQE indicting a surface scattering mechanism that reduces the reflectivity. However, from 400nm-510nm the IQE change is larger than the EQE change which indicates an energy downshifting mechanism is dominating here. The InN-NPs, with 0.7 eV bandgap, can absorb a high energy photon and downshift it to a lower energy photon that can be absorbed in the a-Si. Also, the downshifting is effective in a-Si cell since the absorption depth indicates that 100nm of a-Si material absorbs up to 540nm of light (~2.30 eV). 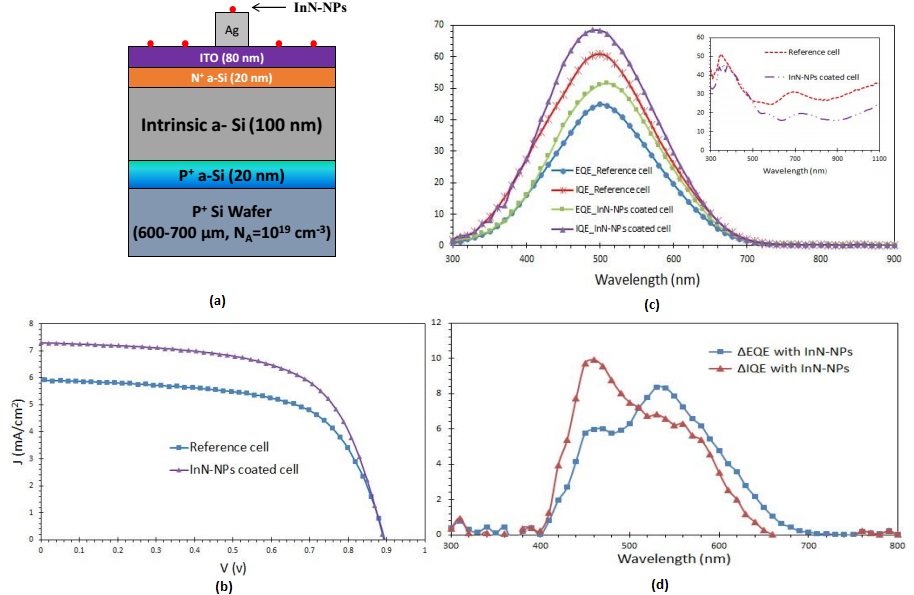