PDR 5 (Hilton Chicago)
A. Molazemhosseini, S. Ieffa, P. Vena, and L. Magagnin (Politecnico di Milano)
Today, rapidly growing range of applications has a critical need for electronic systems, which cannot be made through rigid wafer-based technology. These applications include health-monitoring devices like electrochemical and strain biosensors. The key properties for these devices are bendability and stretchability [1-3]. As intrinsically flexible/stretchable materials have poor electrical performance, the dominant fabrication strategy is to exploit the flexibility of a polymer along with the electrical conductivity of a metal film. In this study, all-wet metallization of polydimethylsiloxane (PDMS) was carried out through Nickel-Boron (NiB) electroless deposition process. Self-assembled monolayers (SAM) of n-(2-aminoethyl) 3-aminopropyl-trimethoxysilane (AEAPTMS) was used to improve the metal thin film adhesion. PDMS surface modification was achieved by sodium hydroxide (1M) immersion for 24h. The modified surface was then silanized by a 0.02% v/v toluene based solution and later activated by a solution of palladium chloride. Water contact angle (WCA) examinations of PDMS surface revealed a significant decrease from 107° for the native surface to less than 50° after surface modification. Surface roughness changes were examined by atomic force microscopy (AFM) before and after each step of surface modification, silanization and metallization. Glow discharge optical emission spectroscopy (GDOES) confirmed the presence of the deposited layers together with the activated interface. Scanning electron microscopy (SEM) observations of PDMS/NiB interface indicated no detachment of NiB film for the silanized samples and significant detachment for non-silanized ones. Results of micro-scratch tests showed a 36% increase in the interface critical normal load of failure for the silanized sample compared to non-silanized one.  Samples with three lines of NiB on PDMS (each line with 5mm width and 20mm length) were prepared to act as a flexible electrochemical sensor (Fig. 1). According to cyclic voltammetry results for a scan range of -1 to 1 mV, the presence of 500 and 1000 ppm ethanol in KOH solution (0.5M) were successfully detected. 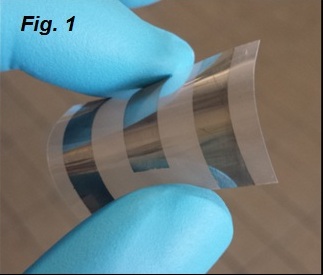