Graphite is widely used anode material for lithium ion batteries commercially due to its good cyclic performance, high reversible capacity and flat discharge plateau below 0.2 V.1 However graphite has disadvantage that it cannot exceed its theoretical capacity limit of 372mAh/g. Therefore hard carbons have been studied extensively which provides more capacity than graphite due to its disordered structure.2,3 However at the same time, capacity fade is a concern of hard carbon materials. In this work, we have considered resorcinol-formaldehyde (RF) xerogel as a precursor to hard carbon upon pyrolysis. RF xerogel derived carbon has been tested in literature as potential anode material for lithium ion battery however its use is limited due to lower reversible capacity.4,5The aim of this work is to enhance the graphitic content of RF xerogel derived carbon by graphitization and thus achieve higher reversible capacity with excellent cyclability. As hard carbons are generally difficult to graphitize at lower temperatures, we used iron acetate as a catalyst to promote graphitization at reduced temperature (1800 °C). Thus obtained graphitized carbon xerogel was ball milled for different times to achieve the desired crystallinity and grain size of carbon particles for enhanced electrochemical performance.

Resorcinol is added to formaldehyde and stirred until complete dissolution followed by addition and continuous stirring of aqueous potassium carbonate solution. 1 wt% of iron acetate was added to solution in an inert atmosphere and stirred for 15 min. After drying in air oven at 80 °C for 24 hours, RF xerogel was pyrolyzed at 1800 °C in a tubular furnace. Prepared carbon xerogel blocks were crushed in mortar before ball milling for 15 min, 45 min and 4 hours.

A thick slurry was made from the ball milled powder and PVDF was mixed as binder in the ratio of 9:1 in N-methylpyrolidone used as solvent. This slurry was then coated on SS foil (100 micron thick) and used as working electrode. Lithium foil was used as counter electrode while glass microfilter was used as a separator. Commercially available LP-30 solution was used as electrolyte. All this was tightly packed using Swagelok cell assembly in inert atmosphere for electrochemical testing.

Figure 1b shows the cyclic performance of RF xerogel derived graphitized carbon powder samples for first 50 cycles. Reversible capacity was marginally higher for 45 min ball milled sample than 15 min milled. However, carbon powder prepared by milling for 4 hours showed significantly initial high capacity (640 mAh/g) than other two other samples. Though, reversible capacity was still higher for 4 hours milled sample after 50 cycles, capacity fade was also found to be significant (nearly 50%). Coulombic efficiency for all three cases was found to be greater than 95%. These results will be further explained in terms of crystalline structures of these carbon powder samples. 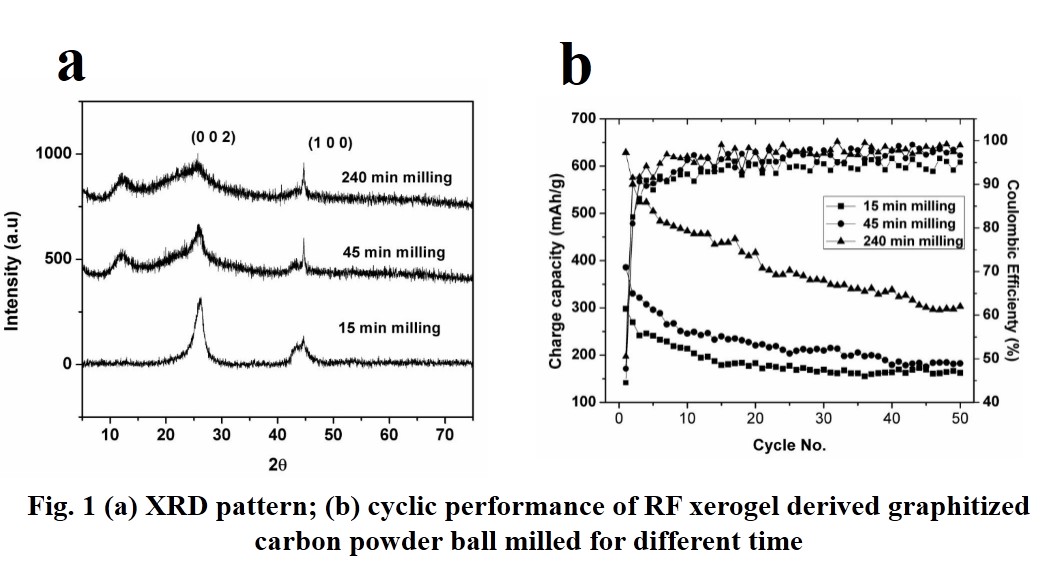