Continental Room B (Hilton Chicago)
A. Jana (School of Materials Engineering, Purdue University), D. R. Ely (Ivy Tech Community College), and R. E. García (School of Materials Engineering, Purdue University)
Lithium dendrites are metallic needle-like structures that electrodeposit on the anode of a battery during charging, and on further cycling, penetrate the intermediate polymeric separator layer, and internally short-circuit the battery. Dendritic growth in lithium-based batteries is known to cause battery failures, fires and other accidents. Dendrites in lithium-based batteries remain a critical challenge in graphite and lithium metal anodes for high current density applications. The growth of dendrites limits the current density inside the battery, which in turn limits the maximum power density that can be harnessed from the system. The problem of dendrites needs to be mitigated in order to maximize the power delivered by electric vehicles, and to realize the goal of matching performance of electric vehicles to that of gasoline driven vehicles.

In this context, analyzing the effect of the pore size of polymer separators on dendrite growth is important. Traditionally, the problem of dendrite growth has been addressed by making separators thicker and more tortuous. However, such separators contribute to increased impedance losses in the battery, and do not completely suppress dendrite growth. In this study, using phase field models, the electrochemical interactions between the growing dendrite and the static separator are delineated. The objective is to find suitable separator morphologies and structures that are not necessarily thick or tortuous, yet can suppress or at least delay dendrite growth. The Allen-Cahn and Butler-Volmer equations are used to computationally observe the growth of the dendrite through the separator. Spatio-temporal electric fields and deposition/dissolution rates in the separator region are calculated during charging of the battery.

It is shown that the growth of the dendrite is a result of two competing forces: the overpotential induced electrodeposition, and the surface tension induced electrodissolution. While high overpotentials cause the dendrite to grow, the curvature of the separator polymer structure imposes surface tension effects that dissolve the dendrite back into the electrolyte.  Dendrite growth ceases when there is a dynamic balance between these two forces. Hence, a critical current density, below which dendrite growth can be suppressed, exists. Further, the critical current density can be expressed as a function of the separator pore size and the inclination of the separator channel. Using this concept of critical current density, several regimes of dendrite growth and suppression have been summarized in a map. The map can be used to select suitable separator morphologies for different current density applications (see Figure 1). Existing commercial separators and their ability to suppress dendrite can also be evaluated.

In addition to proposing regimes of dendrite growth, the phenomenon of “dead lithium” formation, which is well reported in literature, has been captured and explained. Highly constricted separator channels, due to high surface tension forces, can cause a dendrite arm to dissolve and detach from the main dendrite, thus producing an offshoot of metallic lithium electrodeposit, known as “dead lithium” that floats in the electrolyte. The dead lithium experiences electrodeposition from the cathode side, while its back side, which faces the anode, gets dissolved due to lack of sufficient overpotential. This concurrent electrodeposition and electrodissolution on the two opposing faces create an apparent motion towards the cathode that causes the dead lithium to move, and to finally stick on the cathode surface, thus becoming a deleterious charge concentrator. 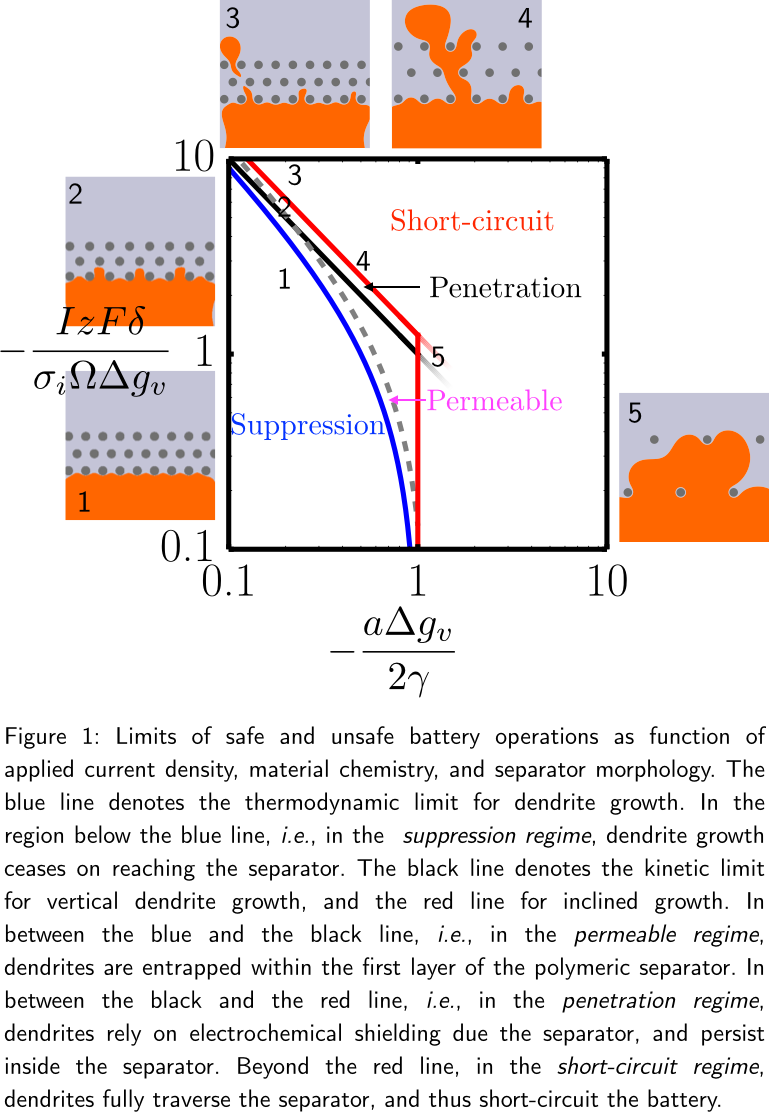