Salon A-2 (Hilton Chicago)
L. Ma and L. A. Archer (Cornell University)
Lithium-Sulfur battery is very attractive due to its high energy density of 2500 Wh/kg or 2800 Wh/L. The low cost of Sulfur ($0.02/g) provides a significant driving force to obtain a commercial Li-S battery. But their practical use is still hindered by several issues including capacity fading, short lifespan, and low efficiency. The dissolution of long-chain lithium polysulfides (Li2Sx, 2 < x < 8) (LiPS) into the electrolyte and the shuttling of polysulfides between cathode and anode have been generally considered responsible for the capacity degradation. A variety of methods have been applied to prevent the dissolution of LiPS, most of which focus on physical trapping by using carbon matrix as barrier materials. However, the effect of barrier materials is kinetics; LiPS physically trapped in carbon host will eventually leach into the electrolyte. Also, the nonpolar carbon matrix will facilitate the detachment of LiPS, which is highly polar, from the cathode, resulting in loss of active materials. Thus thermal sequestering of LiPS via chemical binding and a polar cathode surface is desired.

Herein, we report a facile approach towards high-performance sulfur-carbon cathodes by stabilizing LiPS on amine-functionalized cathode.  Specifically, Polyethylenimine (PEI) is chosen for the reason that it possesses a large amount of amine groups within a molecular. PEI is attached to the cathode by reacting with hydroxyl functionalized carbon nanotubes (Figure 1). The strong affinity of LiPS to PEI-functionalized CNT is verified by DFT calculation, showing high binding energy of 1.23 eV, while it is 0.34eV between LiPS and graphene and 0.83eV between LiPS and PVDF. The interaction is also confirmed by FTIR, XPS, and other characterization techniques. With the merits of CNT such as good conductivity and robust mechanical properties, the nanocomposite of amine-functionalized CNT and sulfur exhibits stable cycling performance with high capacities (Figure 1).

Furthermore, the kinetic study of polysulfides dissolution is carefully carried out. The dissolution constant k is determined by the method described in Figure 2. k is obtained for cathodes with various compositions: (1) Li2S4 without PEI; (2) Li2S4 with PEI; (3) Li2S9 without PEI; (4) Li2S9 with PEI. By comparing dissolution constants in each case, the much stronger affinity of PEI with the LiPS can be observed with smaller k. Also, the higher solubility and dissolution rate are found with increasing chain length of LiPS. The equilibrium concentration (ceq) of LiPS in the electrolyte is found, where LiPS has equal chemical potential in the electrolyte and cathode. This guides us in adding LiPS with concentration of ceqto the electrolyte when designing Li-S batteries. In this case, LiPS will not leach into the electrolyte since there is no driving force in the condition of equilibrium. The battery performance will be presented in the talk.

In summary, the new method takes advantage of the numerous amine groups in PEI and the strong affinity with LiPS to realize a high performance Li-S battery. The systematical kinetic study also reveals the working mechanism and paves the way to further rational design of Li-S battery. 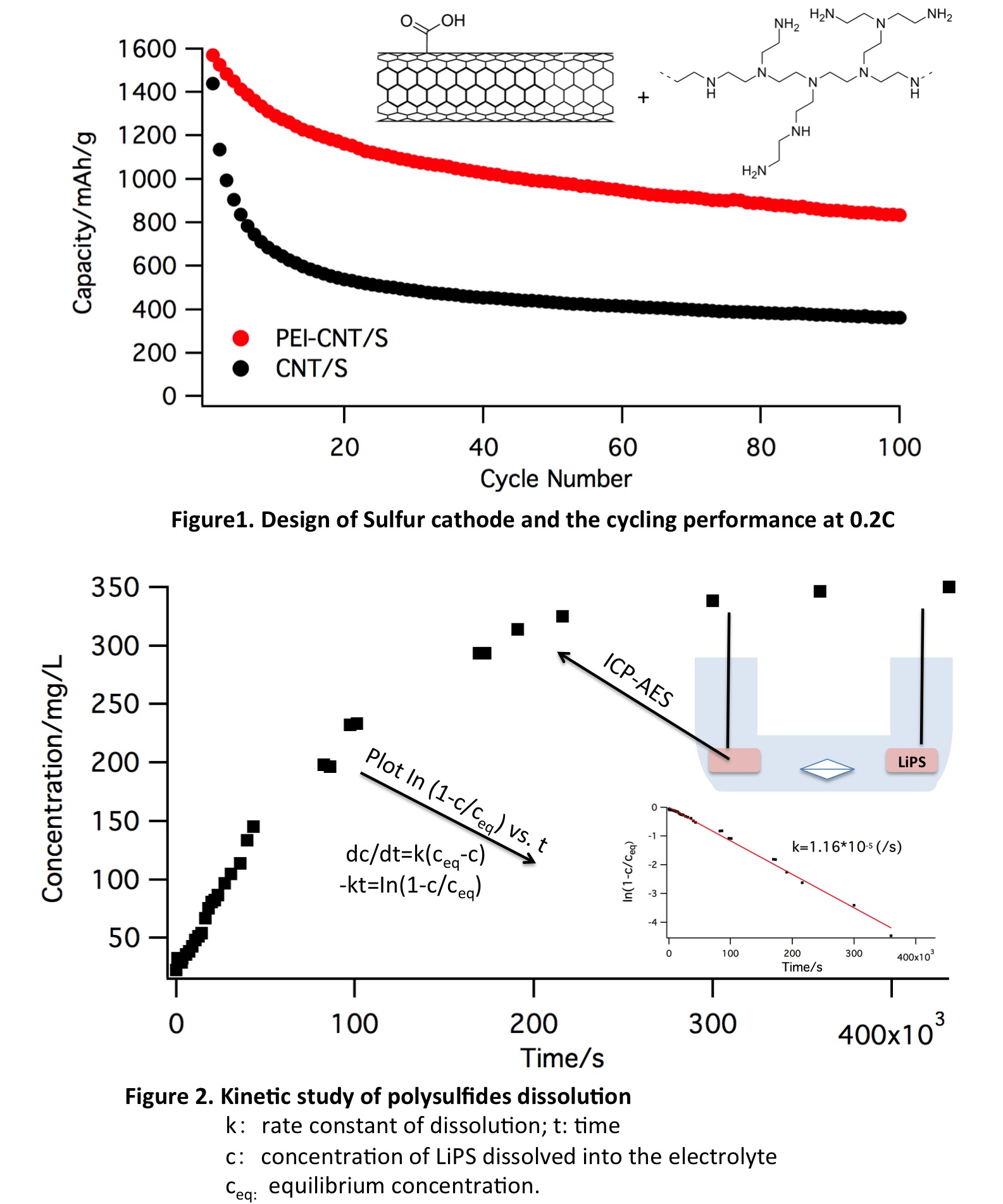