Rechargeable batteries with high energy densities are highly demanded in our daily life and many commercial applications. Lithium-ion batteries have been successfully in the rechargeable battery market, but their energy densities are limited by the capacity of electrodes, particularly the cathodes such as LiCoO2, LiMn2O4, and LiFePO4. To further increase the energy density of rechargeable lithium batteries, alternative cathodes with high specific capacities, such as sulfur with a theoretical capacity of 1,672 mAh/g, are highly needed.1 Sulfur is also an environmental friendly material, which is an abundant element on earth and can be widely used for the future battery applications. Several challenges impede the application of rechargeable lithium-sulfur (Li-S) batteries. For instance, the dissolution and loss of intermediate polysulfide materials between the repeating charge and discharge processes result in rapid reduction of capacity and poor cycle life. To improve the cycling performance, a variety of approaches have been developed showing promising improvements. However, new approaches are still needed which can not only further improve the battery performance but also inspire more interest in the battery community.

Lithium/dissolved polysulfide batteries using binder-free carbon nanotube (CNT) paper as a current collector have shown highly reversible cyclability with unprecedented capacities.2 LiNO3 additive in the electrolyte can form a passivation layer on the surface of lithium metal anode, which can reduce the reduction of lithium polysulfide on the anode side. However, prolonged cycle life (>100 cycles) cannot be obtained which is partially due to the loss of active material from the cathode. To overcome this issue, the current collector should be able to “hold” lithium polysulfides from migrating. We present here a strategy to modify CNT paper by a functional polymer to enhance the “holding” property of the current collector, which can eliminate the use of LiNO3 additive in the lithium/dissolved polysulfide batteries and improve cycle life.

Polyvinylpyrrolidone (PVP) was selected as the functional polymer, which has been confirmed to have high affinity with lithium polysulfides and lithium sulfide.3 A solution (0.15 wt.%) of PVP in ethanol was added to a disc of a commercial CNT paper. Ethanol was evaporated by heating to render PVP-modified CNT paper, as shown in Fig. 1.

To fabricate half cells, 20 µL of 0.25 M Li2S6/1 M LiCF3SO3 in dimethoxy ethane (DME)/1,3-dioxolane (DOL) (1:1 v/v) was added in the PVP-modified CNT paper as the cathode. Additional blank electrolyte was added in between the lithium metal anode and Celgard® separator.

PVP can be dissolved in ethanol, which can be easily removed during the post-heating process. The solution penetration allows uniform distribution of PVP in the CNT paper. After the modification process, PVP formed many small particles within the 3D CNT network and some thin films in the spaces among CNTs, as shown in Fig. 1. Without LiNO3 additive in the electrolyte, the cell can be discharged to 1.5 V without the reduction of LiNO3 at low potential. The cells show typical two distinguishable discharge voltage plateaus and two overlapped charge plateaus, which are similar to those with LiNO3 additive in the electrolyte.2 Fig. 2 shows the voltage profile of the cell in the 1st, 2nd and 50th cycle after initial charge to 3.0 V. Without LiNO3, the cell can be completely discharged to 1.5 V without a voltage slope meaning negligible side reactions in the discharge.

With the PVP coating, diffusion of lithium polysulfides out of the cathode is significantly slowed down, which can be evidenced from the improved cycle life as shown in Fig. 3. The cell without PVP modification shows a rapid capacity decrease from 1,100 mAh/g to 200 mAh/g over 35 cycles. In contrast, the cell with PVP-modified CNT current collector, the cell maintains an average discharge capacity of 900 mAh/g over 50 cycles. The Coulombic efficiency was maintained at 82%. This study demonstrates that PVP can be an efficient binder holding lithium polysulfides from diffusion, which can significantly improve the battery cycling performance. 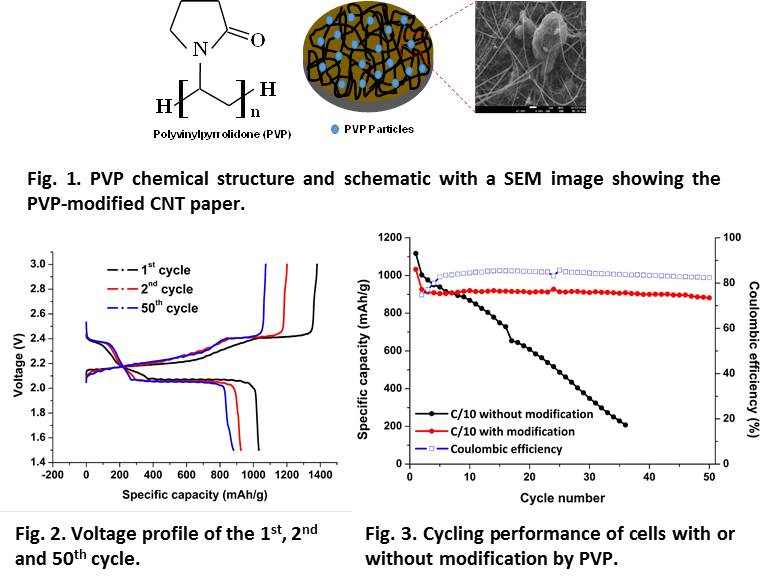