Williford Room C (Hilton Chicago)
P. Vanýsek (CEITEC - Central European Institute of Technology), V. Novák (CEITEC BUT, Brno University of Technology), and L. Chladil (CEITEC - Central European Institute of Technology BUT)
Redox flow battery is a system in which energy is derived from electrochemical reaction of a pair of solutions, of which one is reduced and the other is oxidized during discharge; the opposite process then takes place during charging. One such system is based on solutions of vanadium in several states dissolved and supported by SO42-anion in sulfuric acid. In principle, the starting material for both the positive and negative electrode electrolyte is identical, therefore, mixing of the two solutions through leakage or accident will lead to discharge, but not to chemical degradation of the stock material. Therefore, vanadium redox flow cells enjoy lot of attention in the energy storage industry. Our aim was to carry out more fundamental studies of the redox processes on graphite electrodes in solutions of vanadium salts. The experimental setup was using a rotated disk electrode and voltammetric, and impedance measurements were performed.

Data obtained from impedance measurements enjoy lot of attention in electrochemical studies, because they provide wealth of information relevant to static, as well as dynamic, parameters of the system. The nature of proper impedance data collection (and successful interpretation) requires that the data be collected while the system under observation is stable, at equilibrium, although the equilibrium can be static, as well as dynamic. With this requirement in mind, and also due to some complexity, most impedance analyzers (or their software) will not perform other task while impedance data are taken. However, with fast instrumentation, slow change in bias polarization, deemed sufficiently benign to operate at a (pseudo)equilibrium of the system, should allow impedance data collection as a function of the bias potential.

We present here data taken with Solartron ModuLab setup, which we programmed to perform extremely slow potential scans, and to collect simultaneously impedance data. A control study was performed on potassium hexacyanoferrate (II)in potassium nitrate solution; a classical redox couple. The electro-chemical experiment performed was cyclic voltammetry on a rotated disk electrode and voltammetry of vanadium(IV) in sulfuric acid. This is a system relevant to the redox flow battery energy storage system. A rather slow voltammetric scan (1 mV/s), coupled with rapid data collection using the multi-sine impedance function, was successfully used to collect impedance data without distortion caused by the changing voltage bias during the voltammetric scan.

While the instrument facilitates collection of the data series as described, it does not have a built in data processing that would allow sequential evaluation of all the impedance data series collected. We have developed such an evaluation routine and we are presenting, for the first time, detailed impedance data results running in parallel with the data for voltammetric measurements.

Impedance evaluation usually relies on fitting the data to a suitable equivalent circuit. Attached file is an example shoving variation of one model resistor in the circuit in response to the applied potential. 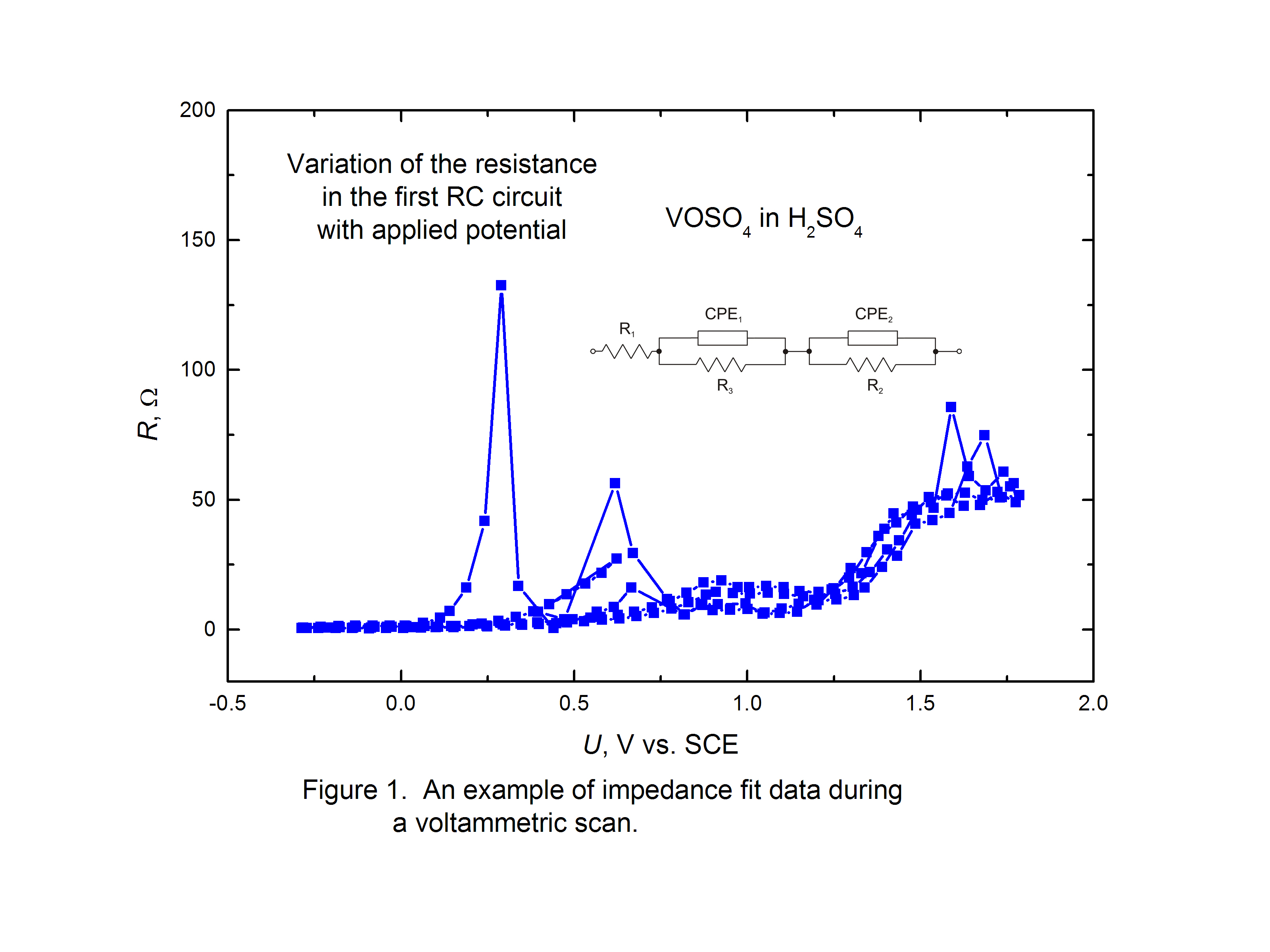