Williford Room C (Hilton Chicago)
F. Fasmin and S. Ramanathan (Indian Institute of Technology-Madras)
In low temperature hydrogen based fuel cells such as proton exchange membrane (PEM) fuel cells, CO poisoning of the anode catalyst is a critical issue. The effects of poisoning on the performance of the cell are commonly investigated using electrochemical impedance spectroscopy (EIS) and other techniques. In the galvanostatic mode of operation, Wagner and Schulze experimentally measured the anode potential and reported that it increases during progressive anode CO poisoning [1]. Wagner and Gulzow measured the impedance of the complete fuel cell during CO poisoning and showed that the magnitude of the impedance, particularly at low frequencies, increased with the CO concentration [2]. On the other hand, reaction mechanisms have been proposed by Springer et al to model the PEM fuel cell anode, with and without poisoning. However, there are no reports which show EIS data of anode with CO poisoning using the proposed reaction mechanism models. A comparison of the simulated spectra with experimental results would facilitate validating the mechanism.

In this work, we simulate chrono-potentiometric data and EIS spectra of the hydrogen oxidation reaction occurring in the half cell, under galvanostatic mode. Two anode kinetic models were chosen from literature [3, 4]. The two models differ in the adsorption mechanism of CO on the anode (linear and bridge). Using the kinetic model proposed by Springer and his coworkers, the steady state polarization curves, transient potential curves and galvanostatic EIS at different concentrations of CO in the feed gas are generated by simulations. The linear adsorption model was employed in the first set of results. The steady state polarization curves predict that the poisoning effect is prominent only for CO concentrations of greater than 10 ppm in the feed gas. At 200 mA/cm2current density, the anode potential increases due to CO poisoning and at 100 ppm CO concentration it reaches a steady state value of 50 mV. At higher CO concentrations the steady state anode potentials are higher. The transient potentials (normalized) at 0, 30, 50 and 100 ppm concentration of CO in the inlet stream are shown  in Fig. a, and the results compare well with experimental results in literature. It is seen that the potential stabilizes faster at higher concentration of CO.

The EIS obtained after stabilization of the potential corresponds to that when the poisoning of the electrode is under steady state conditions. The spectra simulated on the anode fed with pure hydrogen gas (0 ppm CO) and under steady state poisoned condition, for 50 and 100ppm concentration of CO is shown in Fig. b. These are obtained under galvanostatic conditions with 200 mA/cm2current density. The inset shows the complete spectrum at 100 ppm CO. The value of impedance increases from a few mΩ to the order of Ω due to the CO poisoning of the anode. The patterns observed are at variance with the experimental results reported. This indicates that either the kinetic parameters are not representative or the model itself may have to be changed.

Normally, EIS data is analyzed with electrical equivalent circuits, implicitly assuming that the system has been linear, causal and stable. However, during the transient state of poisoning, when most of the data is acquired experimentally, the stability assumption is violated. Using numerical methods, we simulate the spectra duringthe progression of the poisoning process, i.e. under transient conditions, for various CO concentrations and current densities. The change in dc potential with time results in instabilities in the spectra, which are accounted for in numerically simulations. The spectra obtained using the two anode kinetic models in literature are also compared. 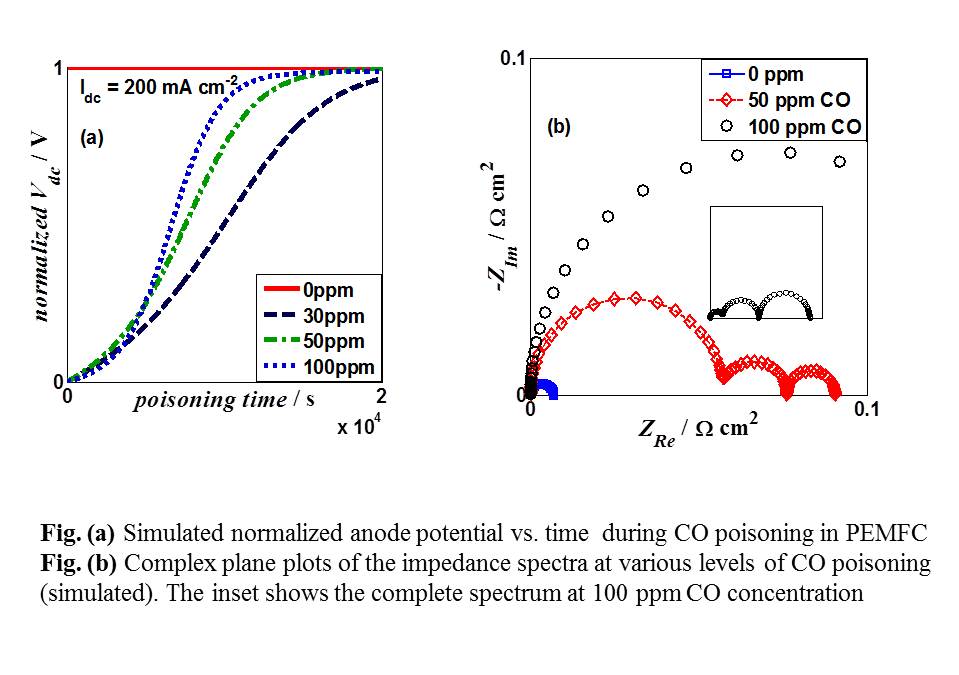