1707
Interpreting Impedance Spectra in the Time Constant Domain: Application to the Characterization of Passive Films

Williford Room C (Hilton Chicago)
Q. Ni, D. W. Kirk, and S. J. Thorpe (University of Toronto)
Electrochemical impedance spectroscopy (EIS) is a useful method for characterizing the interfacial characteristics of materials such as a passive layer underneath the surface of a titanium-based metal-oxide anode. Conventionally EIS data were interpreted by fitting them with electrically equivalent circuit.  However, this method requires the initial knowledge of the structure of the tested material. It is also impossible to model a system with continuous variation of layers. Normally, an electrode with finite dielectric layers can be represented by a series of RC circuits plus an interfacial impedance. To cope with the difficulty of systems with continuous variation, a distribution function may be assumed to describe the distribution of time constant along the thickness of the layers [1]. Still, this approach needs to assume a profile to which the system is restricted.

A reverse approach was proposed [2]. Within a layered material, a distribution function g(τ) of the resistance over the time-constant (τ=RC) may result from the discrete or continuous variation of the composition (Figure1). By simply fitting the EIS data into Equation 1, one may obtain the function g(τ), which is directly related to the layered structures of the electrode.

This method was previously applied to study a transient passive layer in the Ti-supported metal oxide anode, and showed a continuum over the time constant spectrum [2]. However, direct correlation between the bands and the physically observed layers was not well established. Thus the interpretation method by time-constant domain needs to be validated. In the present work, the growth of a titanium oxide film on top of Ti was studied. This reaction is well studied. The growth kinetics and characterization of the titanium oxide film is well established [3]. Therefore it is considered to be a suitable system to test and validate the use of time-constant spectra for the interpretation of EIS.

Commercially pure titanium was polarized in a pH=7 buffer containing phosphate. Preliminary data confirmed that the system showed the growth of a resistance band with a characteristic time constant (Figure 2). This band is different from the other peak representing the surface charge-transfer process. Its position was almost stationary at all voltages. Judging by its increase, it was considered to be related to the dielectric film developed on top of the Ti. Further work will focus on correlating the data with physical data, including thickness and composition information from the literature. 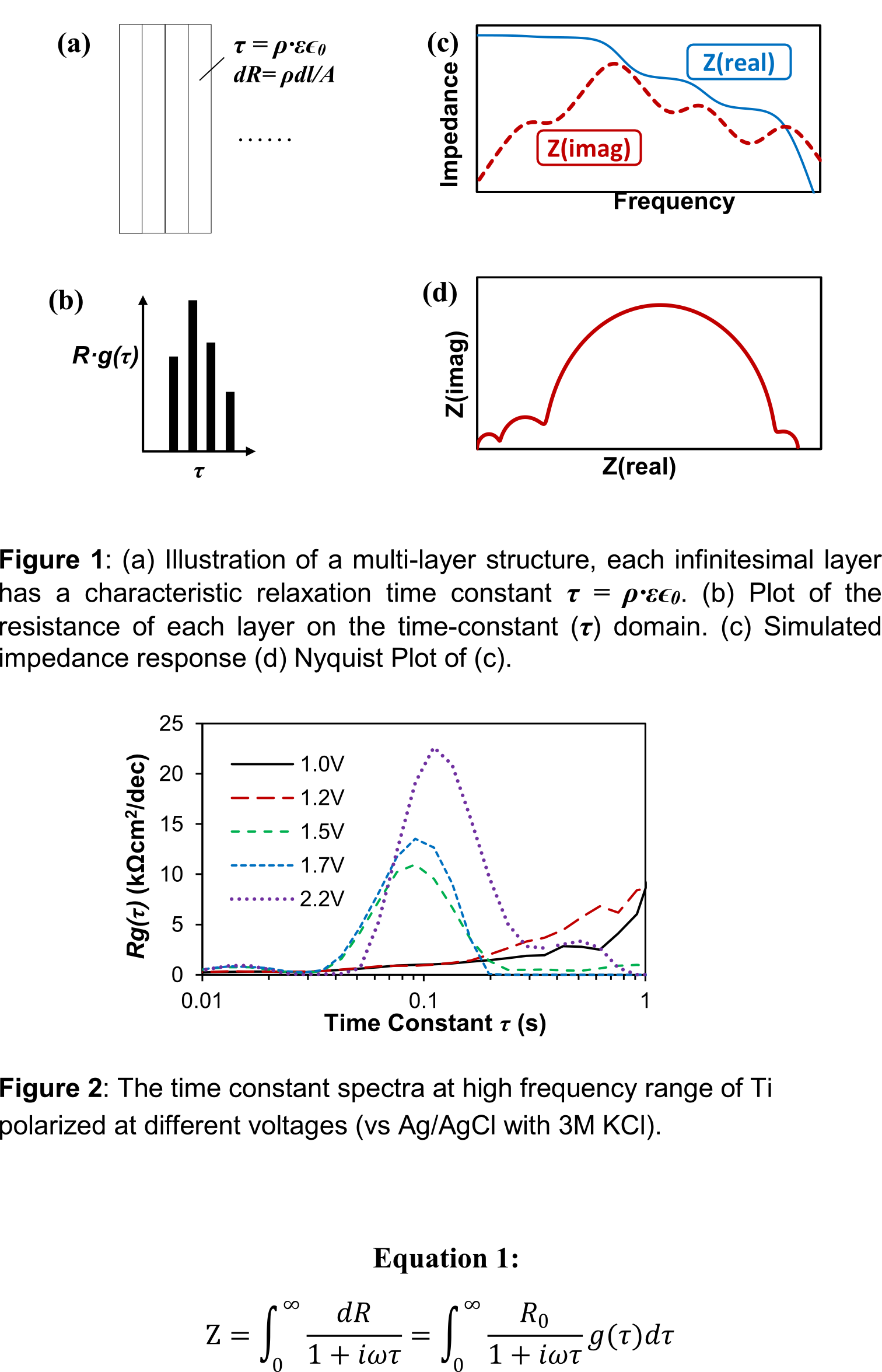