Marquette (Hilton Chicago)
N. El-Atab (Masdar Institute of Science and Technology), B. B. Turgut (UNAM, Bilkent University), A. Okyay (UNAM), and A. Nayfeh (Masdar Institue of Science and Technology)
Innovative means to reduce the operating voltage and increase the stored charge density in current non-volatile memory devices are imperative [1-5]. In this work, 2.85-nm Si nanoparticles (Si-NPs) embedded in an ultrathin HfO2 layer are investigated for charge storage in low-cost non-volatile charge trapping memory devices. The memory hysteresis at different gate voltages, the stored charge, and the energy band diagram of the memory structure are analyzed.

The fabricated memory devices are electrically characterized by measuring the high frequency (1 MHz) C-Vgate characteristics of the programmed and erased states. Using the Agilent B1505A Semiconductor Device Parameter Analyzer, the memory cells gate voltage was first swept from -6 V forward to 6 V then backwards. A 1.8 V threshold voltage (Vt) shift is observed. The C-V measurements are repeated at a gate sweeping voltage of 8/-8 V and both erased and programmed states shifted outwards as shown in Fig. 2 resulting in a 4.5 V memory window. This indicates that the charge trapping layer is storing mixed charges: electrons and holes, however, more charging is due to holes revealed by the greater shift of the erased state in the negative direction as shown in Fig. 2. Moreover, the Vt shift is measured at different gate sweeping voltages as sown in Fig. 3 and the charge trapping density in the Si-NPs is calculated [3] and found to be 2.32 ×1013 cm-3.

Finally, the fabrication of such memory structure is compatible with existing semiconductor processing thus has potential on low-cost integrated nanoscale memory applications. 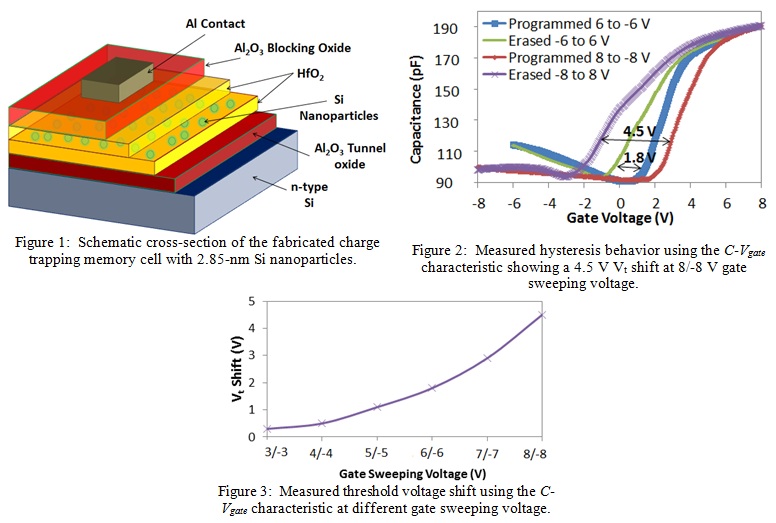