Williford Room B (Hilton Chicago)
L. Filipovic and S. Selberherr (Institute for Microelectronics, TU Wien)
The integration of gas sensor components into smart phones, tablets, and wrist watches will revolutionize the environmental health and safety industry by providing individuals the ability to detect harmful chemicals and pollutants in the environment using always-on hand-held devices. However, before this can be achieved, several challenges must be overcome. Until recently, available gas sensors relied on a bulky architecture whose manufacture was not compatible with that of a conventional CMOS process sequence. The integration with CMOS processing is essential in order to combine the sensor with MEMS and CMOS microelectronics. More recently, semiconducting metal oxides have been shown to exhibit very good conductometric sensing properties, when exposed to an ambient gas at high temperatures. The resistance of a metal oxide film is essentially comprised of two resistances occurring in parallel: one is influenced by the surface reaction and the other depends on the traditional idea of material conductivity. The resistance from the surface reaction is one which changes depending on the ambient temperature and exposure to a reacting gas in the ambient. Although many metal oxides have shown a gas response in their conductivity, tin oxide (SnO2) and tin-doped indium oxide (In2O3), known as indium-tin-oxide (ITO), have garnered particular attention. Due to the need for these films to be heated to temperatures between 300ºC and 550ºC during operation to increase the sensitivity, a considerable degradation of the film can result. In this study the post-processing stress through thin SnO2 and ITO films is analyzed in order to obtain more information about the reliability of these materials for operation in a gas sensor.

The post-processing stress in a thin film is a result of two stress components: the intrinsic stress, which arises during the film deposition, and the thermo-mechanical stress, which is a result of the difference in the deposition temperature and the subsequent cooling to room temperature. The growth mode of thin films depends on the surface free energy of the deposit, the substrate, and the interface between the two materials. The stress evolution during sputter deposition of tin oxide and ITO films is analyzed here. The growth process during sputtering is characterized by the Volmer-Weber growth mode, where small islands of the depositing film form on the surface which, through expansion, impinge on each other, eventually forming a coalesced thin film. Due to the surface interaction between the materials and the impingement of the depositing islands, a stress forms in the thin film. The stress generation during a medium temperature (300ºC) deposition of SnO2 and low-temperature (50ºC) high pressure deposition of ITO is examined. The intrinsic stress is composed of a tensile and a compressive component; the tensile stress depends mainly on the Young modulus of the depositing material and the island geometries during the expansion and impingement of islands with each other. The compressive stress component depends on the geometry of a single island and the surface free energy, a material property which combines the grain boundary energy and the surface energy. Using published values for tin oxide, the average stress in the deposited thin film is simulated, with a result which matches measured values. Using a previously published intrinsic stress value for high-pressure deposited ITO, the appropriate surface free energy value for ITO was identified, enabling further understanding of this important material. The intrinsic stresses of sputtered SnO2 and ITO were found to be 200MPa and 300MPa, respectively. Upon subsequent cooling to room temperature, the stress in the SnO2 layer grew to 425MPa due to the different coefficients of thermal expansion (CTEs) between the tin oxide and the silicon dioxide films.

In addition to the analysis of the stress generation during sputter deposition, an alternative efficient and economical deposition method is examined, namely spray pyrolysis. It has already been shown that tin oxide can be deposited using an efficient and economical technique known as spray pyrolysis. The details of this technique are discussed and a thin film with a thickness of 50nm is deposited on a SiO2 isolation layer in order to be used for a fully CMOS-integrated detector. Spray pyrolysis is a technique which involves three steps: the atomization of the precursor CnCl4 solution, the transport of the aerosol droplets towards the wafer, and the decomposition of precursor at or near the substrate resulting in film growth. A simulation methodology for spray pyrolysis is presented and the difference in the sensing response between sputtered and spray pyrolysis deposited SnO2 thin films for the detection of carbon monoxide (CO) in the environment is analyzed. 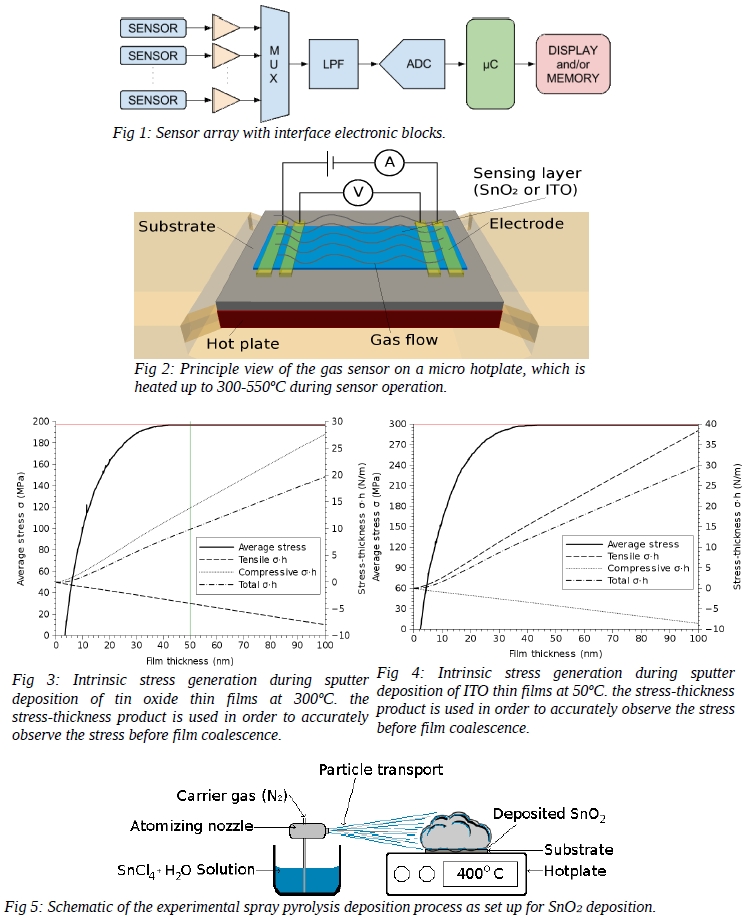