PDR 7 (Hilton Chicago)
C. Lee (U.S. Naval Academy), M. C. Calhoun (University of North Texas, Department of Chemistry), W. Dorriety, R. Hanrahan (U. S. Naval Academy), F. Lancaster (Naval Air Systems Command, Aerospace Materials Division), and R. L. Calhoun (U.S. Naval Academy)
Corrosion continues to be a multi-billion dollar problem for the Department of Defense.[i] Current coatings used to prevent electrochemical degradation use hexavalent chromium, but there is now an effort to replace this given it is carcinogenic.[ii]  Unfortunately, there is no universally accepted method to test and evaluate potential new coatings.  We propose developing a protocol using scanning electrochemical microscopy (SECM) at least screen out poor performers before much time and money is spent on their development.

SECM is a technique developed in the Bard lab at the University of Texas in the early 80’s.[iii]  It involves the use of a very small diameter electrode whose electroactive tip is only microns in diameter.  The sharpened tip is positioned to within a few tip diameters of a surface which allows the surface to be electrochemically interrogated via a mediator in solution.[iv]  This has been extended to study of both corrosion[v] and film transport properties[vi].  It was studies such as these that led us to attempt to use the SECM as a rapid screening tool for various potential anti-corrosion coatings.

The proposed protocol involves, first, mapping the topography of a given area of roughly 100x100 microns by using the negative feedback mode at the insulating surface (figure 1).  In this mode, the tip is oxidizing ferrocene methanol in solution.  When the tip is within a few tip diameters of a feature, diffusion to the tip is blocked and current decreases.  Note in the figure, the current follows the convention of (-) as oxidation.  Thus in figure 1, there is a clear plateau feature to the left.

Then, over the same area, we use the substrate generation – tip collection (SGTC) mode to probe how effective the surface is at passivating the aluminum substrate and curbing diffusion of surface species to/from the substrate.  This is done by setting the substrate at potentials increasingly positive of the redox couple in an attempt to produce a species reducible by the tip.  Good coatings show little response up to several volts.

However, flaws in the coating expose electroactive sites (Figure 2) that may be inferred to be exposed substrate.  Blind studies[vii]have shown the technique able to distinguish known best coatings from inferior products so this work will extend to untested coatings and comparisons of various prepartations. 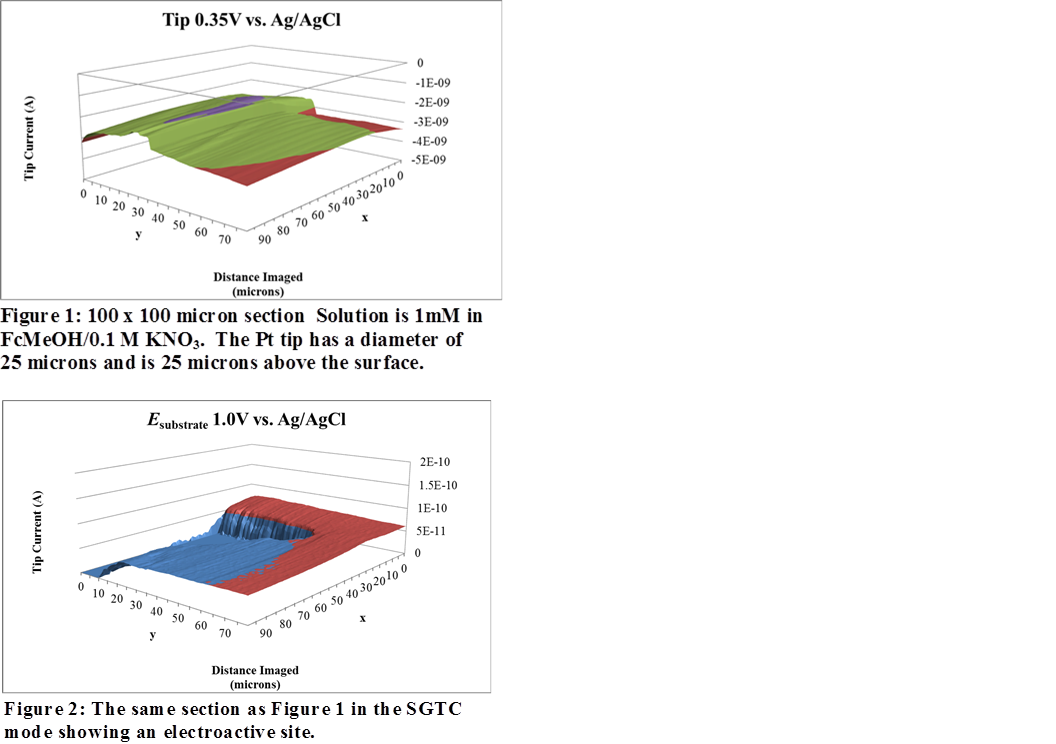