Salon C (Hilton Chicago)
E. C. M. Tse, C. J. Barile, J. P. Gewargis, Y. Li, S. C. Zimmerman (University of Illinois, Urbana-Champaign), and A. A. Gewirth (University of Illinois, Urbana-Champaign, WPI-I2CNER, Kyushu University)
We use a hybrid bilayer membrane as an electrochemical platform to study anion diffusion through a lipid monolayer. We first append lipid on a self-assembled monolayer that contains a covalently-bound Cu(I)/Cu(II) redox center. We then perform cyclic voltammetry using different anions in bulk solution and extract thermodynamic and kinetic information about anion transport. The voltammetry is affected by the scan rate and the identity of the anions, but not the bulk anion concentration. An increase in scan rate causes the HBM system to switch from a diffusionless regime to one controlled by anion diffusion. In the latter regime, we test six anions that exhibit a wide range of cathodic peak potentials and cathodic-anodic peak separation values, which reflect the differences in the thermodynamics and kinetics of anion diffusion across the lipid membrane.

We analyze the results using factor analysis and determine that anion transport quantitatively correlates to polarity and basicity, a relationship we formalize as the lipid permeability parameter. In addition, we discuss how our findings can be interpreted according to the two leading mechanisms describing ion permeability through lipids. Our results demonstrate that anion transport in a HBM is best described by the solubility-diffusion mechanism, not the pore mechanism. 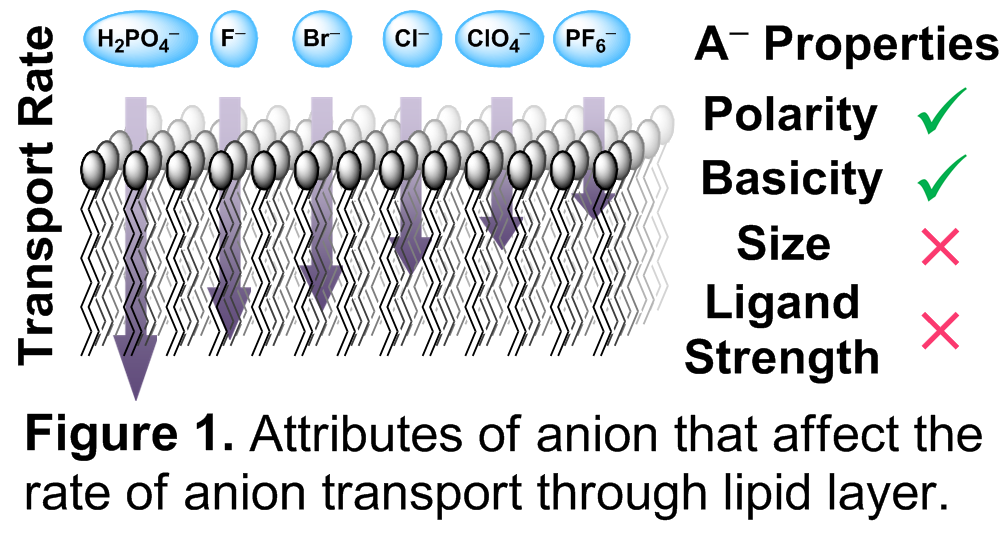