Salon C (Hilton Chicago)
M. Patrick and D. W. Paul (University of Arkansas)
Oxygen plays a vital role in many biological processes, and research has focused on developing methods of quantifying dissolved oxygen content. For example, the development of a reliable and minimally invasive oxygen sensor would be beneficial towards the diagnosis and treatment of ischemic stroke victims.  Electrochemical oxygen probes function by measuring the diffusion-limited current of the dissolved oxygen content, which is directly proportional to concentration. Gold electrodes are highly susceptible to biofouling by adsorption of macromolecules to the surface. The biofouling resulting from implanting a probe in vivo impairs the probe’s ability to function. Using a protective film over the sensor’s surface will aid in diminishing these effects leading to a more stable and reliable sensor. To attempt to minimize biofouling, a protective polymer is applied to the surface of the gold electrode via electropolymerization. Electropolymerization has many advantages, including control of polymer thickness, reproducibility, and uniform polymer deposition. Although the effects of biofouling on sensitivity are known, there has not been a systematic study which examines the effects of specific biofoulants on oxygen sensitivity over time.

PoPD has been shown to be permeable to small molecules, namely hydrogen peroxide, but shows relatively low permeability to larger interferents. PoPD has been used extensively in enzyme sensors such as glucose sensors, suggesting that it is permeable to oxygen, as the glucose oxidase enzyme requires oxygen to function. PoPD is also thought to be one of the polymer coatings most likely to withstand long-term in vivo use. PoPD has not been used as a protective polymer membrane for Clark-type oxygen sensors. Here we show the effects of biofouling on the oxygen sensitivity for PoPD-coated electrodes.

PoPD was electropolymerized over 2 mm gold electrodes. The effects of biofouling over time were examined using 4 PoPD-coated electrodes and 1 bare electrode in the control solution, and 4 PoPD-coated electrodes and 1 bare electrode in the test solution. Calibration curves were constructed by deaerating the solutions and obtaining cyclic voltammograms at increasing oxygen concentration; the oxygen sensitivity was then found by analyzing the slope of the resulting calibration curve for PoPD-coated and bare electrodes. The control solution consisted of an electrolyte solution, while the test solution consisted of the electrolyte solution containing biofoulant. Example solutions include aCSF/aCSF with bovine serum albumin (BSA), aCSF/aCSF with fibrinogen, and phosphate buffer saline (PBS)/PBS with rat brain homogenate.

In vivo devices are given a “run-in time” after implantation due to initially decreasing oxygen sensitivity, which then increases and returns to a constant value. Our data indicate that BSA is most likely responsible for the transient behavior in sensitivity due to biofouling of the surface of the implanted device.

Figure 1: Calibration curves for PoPD-coated electrodes in aCSF and aCSF/Fibrinogen on Days 0 and 19. The solid lines show the calibration data for Day 0, while the dotted lines show the calibration data for Day 19; green indicates the control aCSF solution, and blue indicates the test aCSF/Fibrinogen solution. The electrodes were stored in their respective solutions when not in use. In the presence of fibrinogen over time shows little effect on the PoPD-coated electrode sensitivity to oxygen. 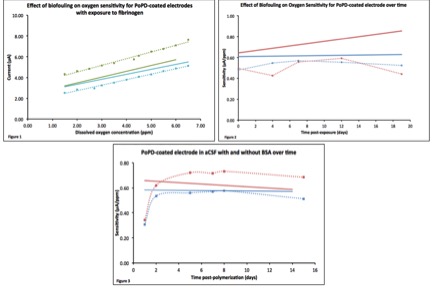