PDR 4 (Hilton Chicago)
S. Gallanti, E. Chassaing, D. Lincot, and N. Naghavi (IRDEP)
Thin films of ZnO find a number of important applications such as chemical sensors, light emitting devices, photosensors, solar cells and dye-sensitized solar cells [1]. Electrodeposition is one of the promising techniques for cost reduction and large area applications and specially suited to solar cells. Electrodeposition of crystalline ZnO thin films from aqueous solution is either based on electroreduction of nitrate or dissolved oxygen [2]. Large numbers of studies have been devoted to growth by electrodeposition for the synthesis of nanostructured ZnO layers. It has been shown that is possible to tune the morphology and density of ZnO layers by varying the electrolyte composition or the concentration of the chemical species present in solutions. In this study the effect of the action of thiourea on the growth mechanism, crystal structure and morphology of ZnO layers will be investigated.

The deposition of zinc oxide is investigated using zinc nitrate aqueous solutions. The effect of thiourea concentration has been first evaluated from a theoretical solution chemistry analysis by mean of solubility diagrams and repartition of the species showing that even if zinc-thiourea complexation constants are quite low, zinc ions are consistently complexed by the thiourea for pH<6. Moreover, standard equilibrium potentials have been estimated from the Gibbs free energy values at 80 °C in order to predict the reactions which are most likely to occur. Cyclic voltammetry studies are then carried out using SnO2:F (FTO) and ZnO:Al-coated glass as a function of the thiourea concentration. The main reduction wave corresponds to simultaneous nitrate reduction and ZnO electrodeposition (Reaction 1)[3]:

A shift of the reduction wave is observed as soon as thiourea is added into the electrolyte. In order to visualize this trend, Fig. 1 shows the potential as a function of the thiourea concentration recorded for a fixed current density value in the voltamperometric curves.

The films have been grown at a potential of -1.5 V/MSE for 5 minutes for increasing  thiourea concentrations between 0 M and 1 M on both the substrates. The films are characterized through XRD, SEM and EDX analysis. Results show that the concentration of thiourea has a significant influence on the morphology and growth rate of films. XRD analysis shows that the film is composed of well-crystallized ZnO. EDX analysis highlights that Zn and O are the main components of the films with a very low incorporation of sulfur. SEM analysis indicates that the surface morphology is clearly evolving from a classical platelet ZnO structure, to nodular morphology for increasing thiourea concentrations. Fig. 2 shows the cross section of a deposited ZnO film in presence of thiourea. The film is about 4 μm thick and presents a nanoporous structure. In fact, as soon as 0.05 M of thiourea is added in the electrolyte, the thickness of the films seems to be much larger than expected from the apparent Faradaic efficiency (Fig. 3). Based on these results it seems that thiourea could be a suitable additive for the formation of nanoporous films. The mechanism of the formation of the films will be discussed in detail. 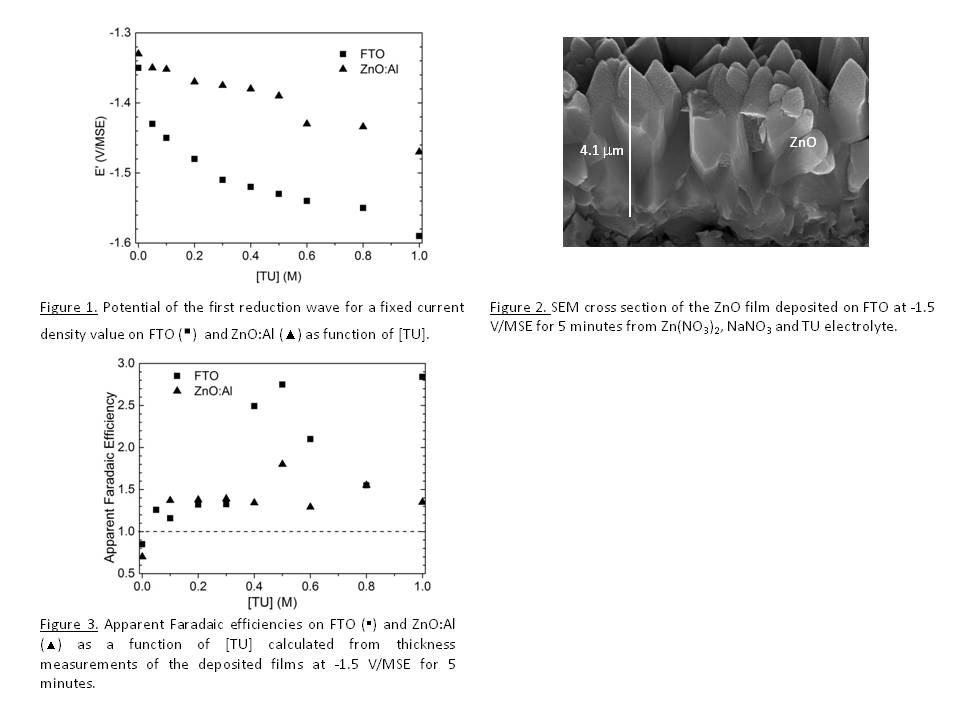