There is increasing interest in finding alternatives to the LiPF6 electrolyte salt currently used in lithium-ion cells. Among the various candidates, LiFSI (Lithium bis(fluorosulfonyl)imide) has attracted much recent attention because it is reported to have higher ionic conductivity, better high temperature stability, and improved stability towards hydrolysis than LiPF6.1-4 In addition LiFSI is reported to be compatible with graphite and silicon based negative electrodes creating stable solid electrode interphase layers that enhance cell life. In this work we compare the cycling behavior of cells with Li1.03(Ni0.5Mn0.3Co0.2)0.97O2–based and graphite-based electrodes, and full cells with these electrodes, in LiFSI- and LiPF6-bearing electrolytes. Results from such studies are expected to determine the suitability and limits of LiFSI-bearing electrolytes in lithium-ion cells for transportation applications.

Fig. 1 shows that the first two cycles of full cells with EC:EMC (3:7, w/w) + 1.2M LiPF6 (aka LiPF6) or 1.2M LiFSI (aka LiFSI) electrolytes are very similar. This similarity is also seen in the differential capacity plots (Fig. 2). However, Fig. 2 inset, which is an expanded view of the 1.5-3.5 V first charge shows differences between the SEI formation characteristics of LiPF6and LiFSI electrolytes; i.e., the LiFSI salt alters interaction of the solvent with the graphite electrode. Other observations from our experiments include the following:

More information on cell performance and performance degradation, including data from self-discharge, capacity retention, and impedance measurements at 30° and 55°C will be discussed during our presentation. Strategies to overcome the current limitations of LiFSI-bearing electrolytes will also be highlighted.

We acknowledge support from the U.S. Department of Energy’s Office of Vehicle Technologies. We are grateful to S. Trask, B. Polzin, and A. Jansen, from the CAMP Facility (Argonne) for the electrodes, and to M. Kras from the Materials Engineering Research Facility (MERF) for assembling the coin cells, used in this work. These facilities are fully supported within the core funding of the Applied Battery Research (ABR) for Transportation Program. 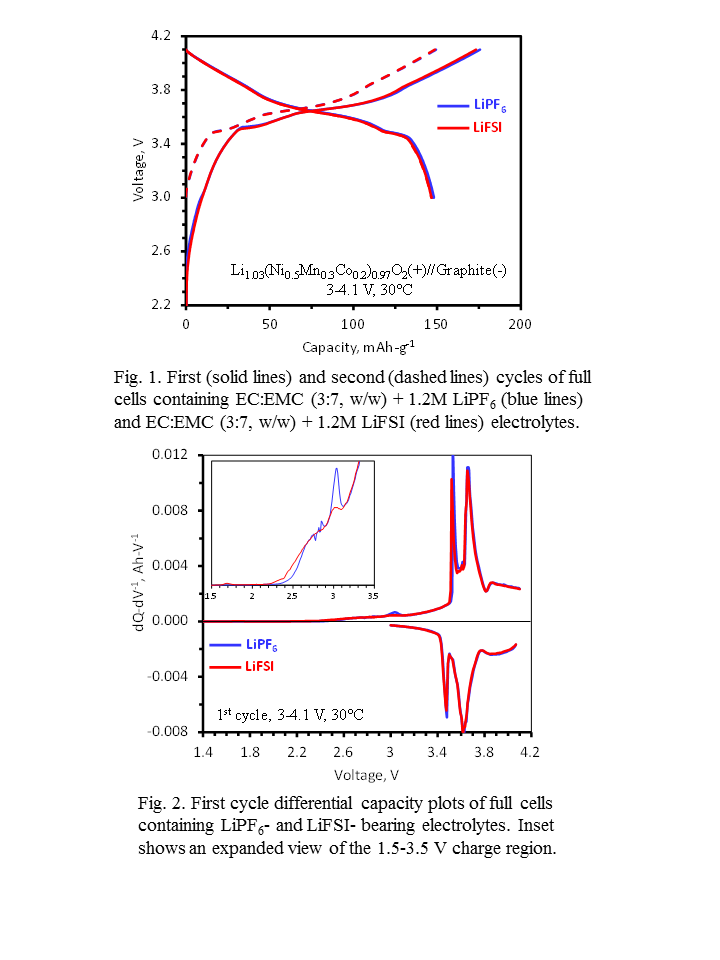