PDR 4 (Hilton Chicago)
J. W. Gallaway, A. Gaikwad, L. Sviridov, S. Banerjee (CUNY Energy Institute at the City College of New York), B. J. Hertzberg, D. A. Steingart (MAE/ACEE Princeton University), C. K. Erdonmez, Y. C. K. Chen-Wiegart, K. Evans-Lutterodt, and J. Wang (Brookhaven National Laboratory)
Systems in which a continuous layer of zinc is electrodeposited from a flowing electrolyte have received attention for use in large-scale applications, such as peak-shaving batteries.1 During continual cycling of such a zinc layer as occurs in a battery, dendrites progressively form. These dendrites, which have a mossy micro-morphology, eventually lead to shorting of the cell after many cycles. Periodic “reconditioning cycles” can avoid this shorting, by eliminating surface roughness of the zinc film.2 However, reconditioning cycles represent a break in normal battery operation, and a more passive additive-based solution to the problem is desired.

Bismuth oxide, Bi2O3 which is sometimes used as an additive in zinc batteries, has extremely low solubility in concentrated KOH electrolytes. In a standard battery electrolyte (8.9 M KOH with 0.6 M ZnO) the bismuth saturation concentration is 26 ± 1 ppm Bi. This corresponds to 1.2 × 10−4 M of the dissociated form BiO2−. It was found that 3 ppm Bi in the electrolyte resulted in dramatically planarized zinc layers during cycling.3 This is shown in Figure 1, with Bi concentration reported as a percentage of saturation (thus 3 ppm = 10% of Bi saturation). Higher concentrations of Bi resulted in more severe dendrite formation than the additive-free case. As imaged by SEM, zinc films electrodeposited with Bi had similar structures regardless of the Bi concentration. Generally this was the mossy zinc structure with incorporated bismuth domains.

A specially designed X-ray-transparent flow cell was used to track Zn-Bi metal layers in situ during electrodeposition. X-ray microdiffraction experiments allowed the composition of the metal layer to be tracked with 5-micron precision. The metal-electrolyte interface was found to be bismuth-rich, and this enrichment took place during discharge. Thus bismuth acted as a surfactant. Transmission X-ray microscopy (TXM) suggested that while bismuth resulted in a higher surface roughness during electrodeposition, raised portions of the metal were electrodissolved first in the presence of bismuth, thus planarizing the layer.

These experiments were conducted at beamlines X13B (mircodiffraction) and X8C (transmission X-ray microscopy or TXM) at the National Synchrotron Light Source (NSLS).

Figure 1. Metal layers in flowing electrolyte monitored in situ during layer cycling by optical microscopy. Cycle times and bismuth additive concentrations (in % saturation of the electrolyte) were as indicated. Panel (c) demonstrated the robust result that bismuth additive at 10% of saturation (3 ppm) resulted in a planarized metal layer. Cycling current was 35 mA/cm2. 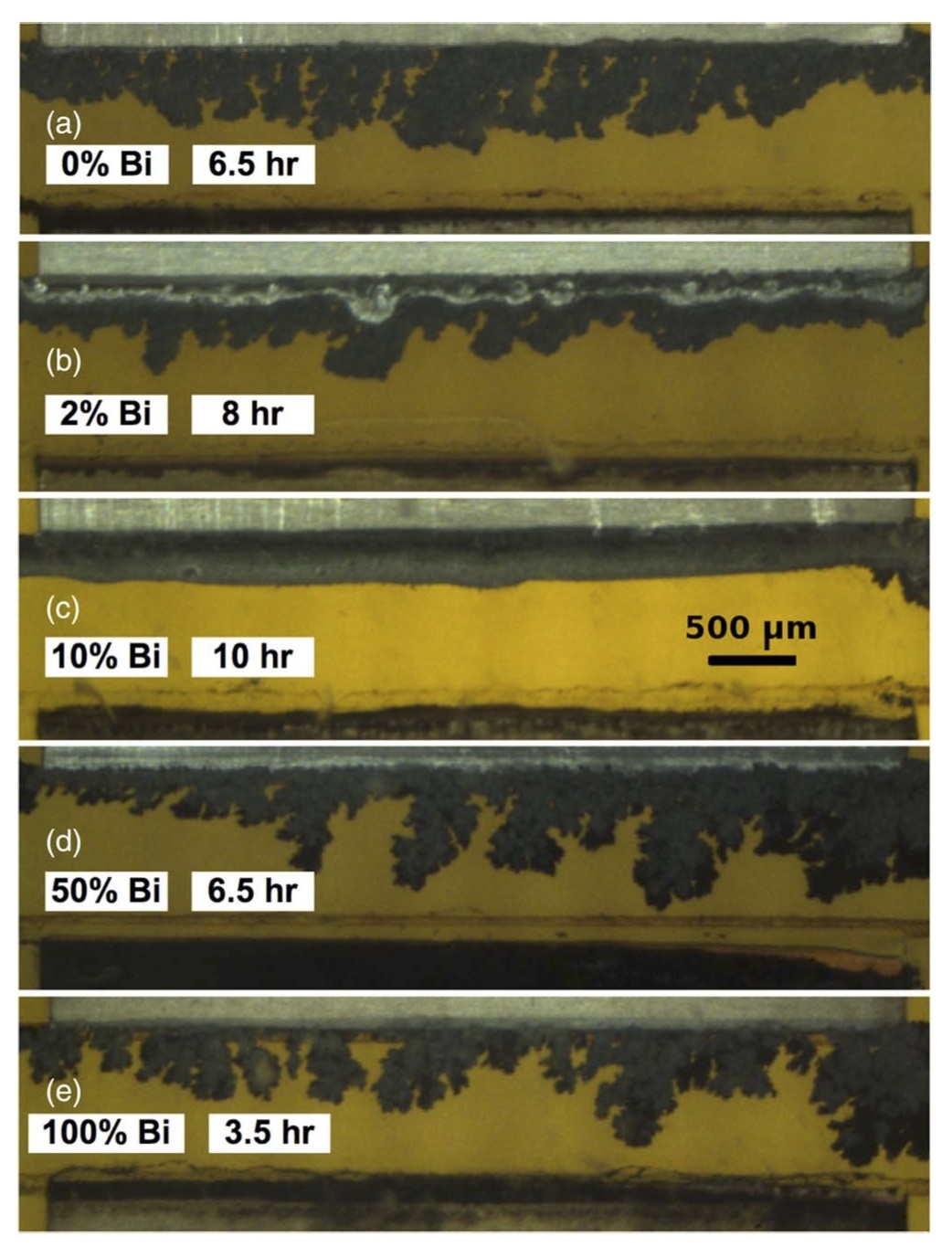