Boulevard Room C (Hilton Chicago)
J. Druce, H. Téllez, T. Ishihara (wpi-I2CNER, Kyushu University), and J. A. Kilner (Imperial College London, London, UK, wpi-I2CNER, Kyushu University)
The exchange of oxygen between a solid oxide electrode and the gas phase is key to the operation of electrochemical energy conversion devices such as Solid Oxide Fuel Cells(SOFCs) and Electrolysers (SOECs), as well as for related applications such as oxygen separation membranes. Whilst the mechanisms of bulk transport in these materials are, for the most part, well understood, a precise description of the surface exchange process in atomistic terms is still unavailable.

To understand the mechanisms of oxygen surface exchange in these materials, and its influence on device performance and degradation in the long term, we must know the composition of the oxide surface after heat treatments representative of the processing and operation conditions relevant to these devices. To this end, our group has recently been applying Low Energy Ion Scattering (LEIS), which is capable of analyzing the very outer atomic layer of a surface, to the study of these materials [1,2,3]. This contribution summarizes some of our recent studies of the evolution of surface and near surface composition in typical solid oxide electrode materials, namely La0.6Sr0.4Co0.2Fe0.8O3-d (LSCF) and GdBaCo2O5.5+d(GBCO).

After sintering, the surfaces of both materials are covered by the preferentially segregated (divalent) alkaline earth cation (Sr2+ or Ba2+respectively), with the transition metal, often assumed to catalytically active site for the oxygen incorporation reaction, apparently absent from the surface [3]. Sputter depth profiling analyses of the sintered samples reveal a sub-surface region enriched in the transition metal cation, apparently associated with the segregation of the larger rare earth / lanthanide cations to the surface.

Furthermore, we show that these surface composition changes do not only occur at the high temperatures used for device processing, or time scales comparable to device lifetimes. In fact, significant changes in surface composition are seen at even modest temperatures and relatively short times. For example, an enrichment in Sr and a decrease in the concentration of transition metal cations exposed at the surface has been in seen in LSCF annealed at 400 °C for 8 hours [1] (fig. (a)). In a later set of experiments (fig. (b)) on GBCO focusing on shorter timescales, segregation of the Ba2+cation was evident after only 15 minutes at 400 °C [2]!

These results underline the very strong tendencies for cation segregation in these materials. As measurable changes in surface composition occur even at these low temperatures, it is clear that for any electrode material that has been exposed to elevated temperatures, whether during processing or during operation, the surface composition will not be a simple termination of the “ideal” bulk, and that cation segregation processes will play a role in determining the surface kinetics. 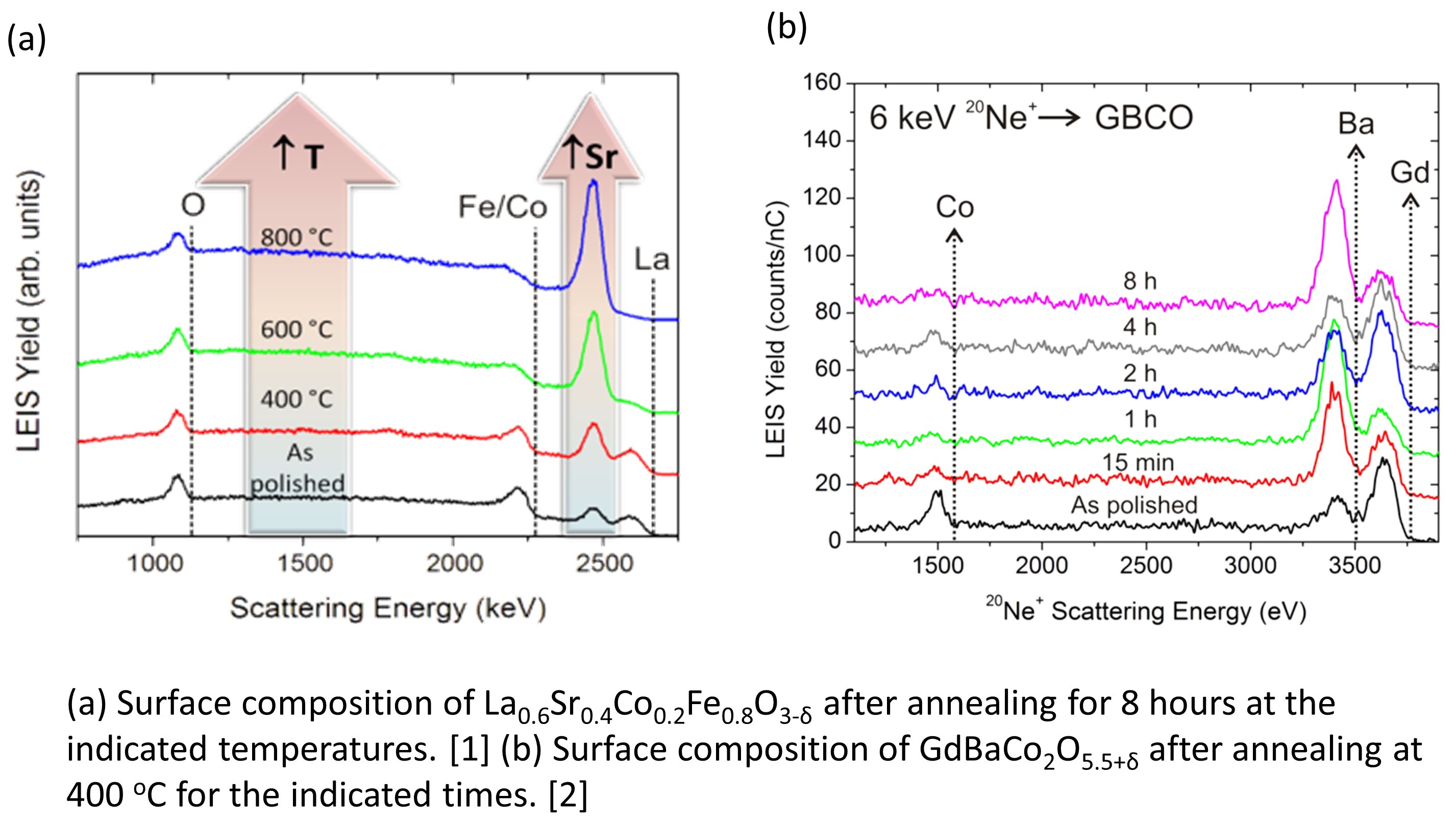