PDR 7 (Hilton Chicago)
H. Ishii (Tohoku University), K. Takahashi (Sumitomo Osaka Cement Co., LTD), T. Goto, S. Sugawa, and T. Ohmi (Tohoku University)
Low work function thin film is important for various electron devices to realize high-efficiency electron emission capability. Lanthanum Hexaboride (LaB6) is well known as a low-work-function bulk-crystal material ( 2.7eV) [1] which has been extensively used for field emission devices. We have developed sputtered LaB6 thin films using the sintered LaB6 target, and the LaB6 thin film with work function of 2.8 eV was realized in the previous study [2]. In this report, we investigated the dependence of impurities such as nitrogen and oxygen in the LaB6 target on the work function of sputtered thin films, and found that the work function of sputtered films can be reduced by doping small amount of nitrogen in the target.

Fig.1(a) shows a work function of the sputtered films as a function of nitrogen doping content in the target. In this case, oxygen content in the target was controlled at 0.22-0.30 wt%. LaB6 thin film was deposited using the rotation magnet sputtering equipment [2], where approximately 100-nm thick LaB6 films were deposited on Si substrate with thermally grown SiO2 at room temperature. Work function was obtained by the vacuum ultraviolet photoelectron spectroscopy (UPS) method. It was found that the work function is lowest for the nitrogen content of approximately 0.4 wt%, where very low work function of 2.4 eV was achieved.

To investigate the observed dependence of nitrogen and/or oxygen doping content upon work function of the sputtered film, we carried out X-ray diffraction (XRD) to measure crystallinity and crystal orientation. However, no significant difference was observed regardless of nitrogen content, where (100) orientation with almost the same peak height and width was obtained. Also, it was difficult to detect nitrogen content in the thin film at present. On the other hand, clear dependence of nitrogen content in the target was found in the Hall effect measurements for the sputtered film: Fig.2 shows mobility and density of carriers (electrons) of LaB6 films as a function of nitrogen doping content obtained by the Hall effect measurements. Conduction type was confirmed to be n-type conduction. It was found that both carrier mobility and carrier density are highest at the nitrogen content at approximately 0.4%, for which lowest work function was obtained. The results suggested that orderliness between atoms was improved at this condition, resulting in the realization of low work functions, although the mechanism is not well understood yet. The low work function sputtered LaB6 thin films obtained by nitrogen doped LaB6 target has a potential to realize various high performance electron devices exhibiting high efficiency electron emissions. 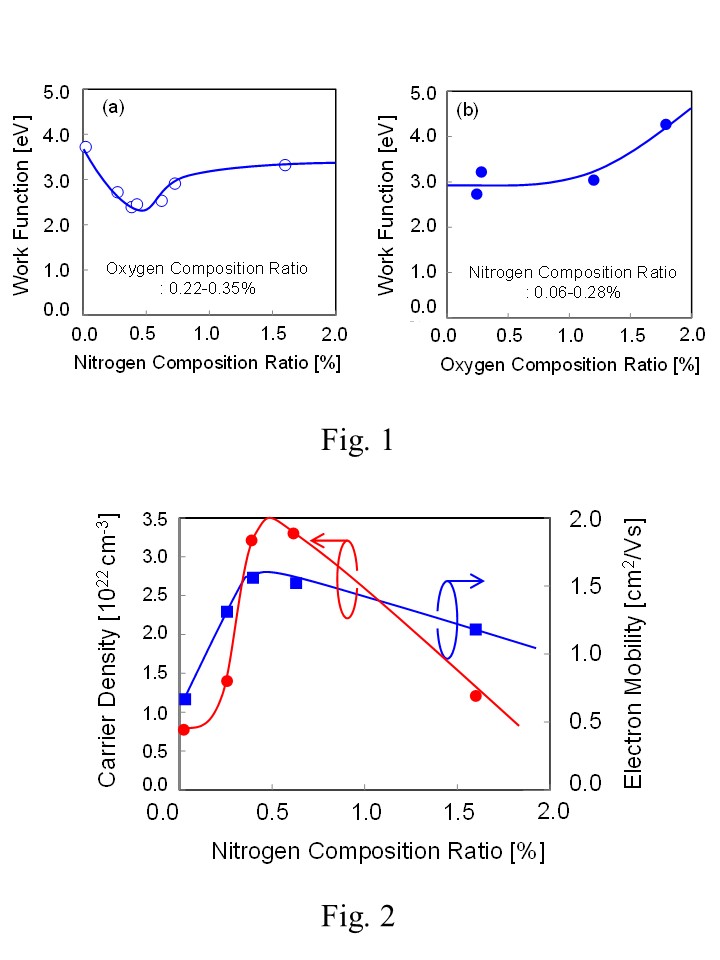