1031
ORR Catalyst Based on Polypyrrole Nanowires with Electrochemically Immobilized Macrocycles

Optimizing the amount of platinum, and eventually avoiding its use, is one of the ultimate goals for polymer electrolyte fuel cells (PEFC). In this regard, different approaches have been investigated such as using platinum alloys with non-precious metals, preparing particles with a non-precious metal core and a platinum shell, and by the use of novel supporting materials [1-3].

As part of the latter effort, carbon has been the most widely used electronically conducting support to obtain higher active surface area and efficiency. In addition, nanostructured conducting materials like carbon nanotubes, nanofibers and mesoporous carbon have also been used for supported metal catalysts [4-7].

The work we are presenting involves the development of a new class of ORR catalysts based on polypyrrole nanowires with immobilized macrocycles, which are incorporated into the polymer during the electropolymerization process as counterions. In this new approach polypyrrole nanowires play the role of a conductive supporting material while the incorporated macrocycles provide the active centers for ORR catalysis (Figure 1).

Electrochemical characterization, including RRDE studies, was performed to determine the catalytic properties of the new conductive nanostructured material. For this purpose, the catalyst was electrochemically deposited on a glassy carbon disk electrode in presence of the macrocycles as supporting electrolyte in order to incorporated them into the polymer as counterions.

The new ORR catalyst based on polypyrrole nanowires with immobilized macrocycles showed promising RRDE results for ORR catalysis. Furthermore, this catalyst demonstrated good potential as a new class of non-precious metal catalyst without involving pyrolysis steps during the preparation process.

The financial support from the University of California (grant 12-LR-237440) is gratefully acknowledged.

Figure 1. SEM picture of the new class of ORR catalysts based on polypyrrole nanowires with immobilized macrocycles with ORR catalysis centers. 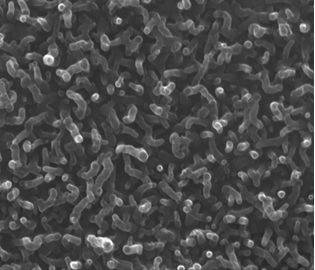