Salon A-3 (Hilton Chicago)
Z. Zhang (Argonne National Laboratory), N. Azimi (University of Illinois at Chicago, Argonne National Laboratory), Z. Xue (Argonne National Laboratory), and C. G. Takoudis (University of Illinois at Chicago)
Despite the great promise, the Li-S battery poses several technological challenges, including fast capacity fading with cycling, high self-discharge rate, and low energy efficiency. Many of these issues are related to the internal “redox shuttle mechanism,” which results in parasitic reactions of dissolved lithium polysulfides (Li2Sx, x=4-8) with the lithium anode and the loss of sulfur active material.[1] A problem arises because of the dissolution of lithium polysulfide from the cathode into the electrolyte solventŻtypically a mixture of 1,3-dioxolane (DOL) and 1,2-dimethoxyethane (DME).

In this paper, we present a new electrolyte containing an organo-fluorine compound, 1,1,2,2-tetrafluoroethyl-2,2,3,3-tetrafluoropropyl ether (TTE) for the first time for the lithium-sulfur battery. Fluoroether compound exhibits much higher hydrophobicity than its non-fluorinated counterpart, and as a result, its interaction with hydrophilic Li2Sx is quite weak. A solubility test clearly indicated that Li2S8 has very limited solubility in the mixture of Fluoroether 3 and DOL at a 1:1 or greater volume ratio, whereas it completely dissolves in the mixture of DOL/DME (1:1 ratio), a state-of-the-art (SOA) electrolyte for the Li-S battery (Fig. 1). The low solubility of lithium polysulfides in fluoroether solvent significantly affects their diffusion into the bulk electrolyte, mitigating the shuttle effect and enhancing the charging efficiency (Fig. 2).[2] The new fluorinated electrolyte suppressed the deleterious shuttling effect and improved the capacity retention and coulombic efficiency in cell tests. In addition, it was found to eliminate the self-discharge of the lithium-sulfur battery. 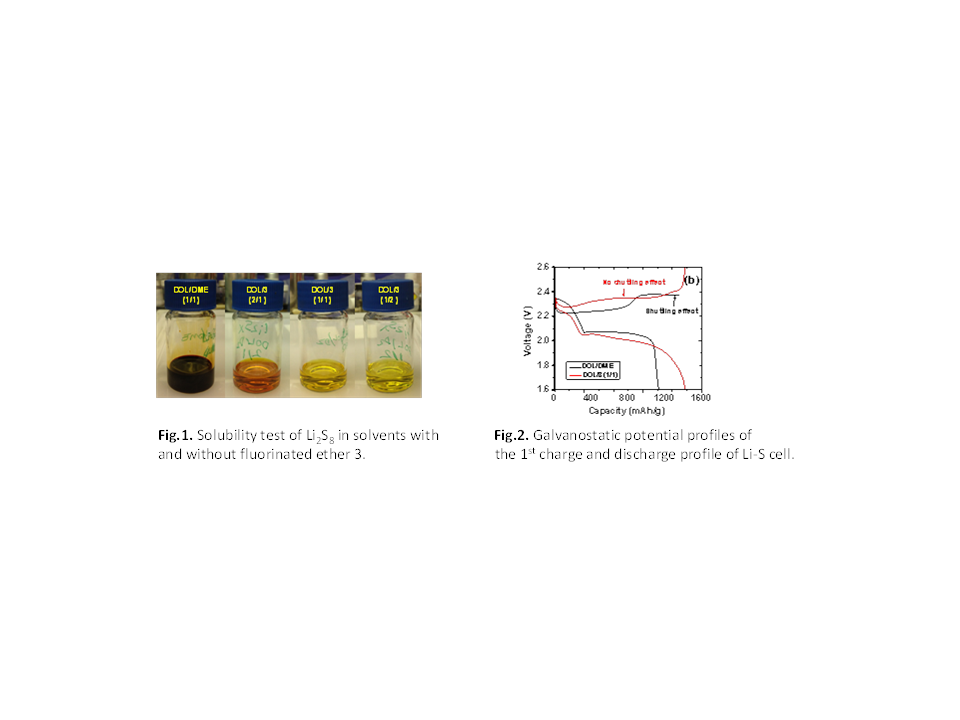