Salon A-3 (Hilton Chicago)
A. Siebel (Technische Universität München), Y. Gorlin, M. Piana (Technical University of Munich), M. Tromp (Technische Universität München), and H. A. Gasteiger (Technical University of Munich)
The improvement of the energy density of current Li-Ion batteries and the development of novel, post-Li-Ion energy storage devices is largely hindered by a poor understanding of the cell chemistry and degradation mechanisms which ultimately lead to a low cycle life and/or poor rate capability. For example, some controversy still exists regarding the formation of Li2S and is related to the fact that intermediates can’t be easily characterized due to their low stability. In-situ speciation using common characterization techniques including X-ray diffraction (XRD) [1, 2] and Ultraviolet-visible spectroscopy (UV-VIS) [3, 4] was previously attempted but yet unable to yield a clear understanding of intermediates involved in the electrochemical conversion of sulfur to Li2S during discharge of the battery. This is mainly due to the fact that they detect either solid or liquid species but not both at the same time.

X-ray absorption spectroscopy (XAS) eliminates these restrictions and thus provides a powerful tool for monitoring compositional changes during operation of a battery. Different sulfur species exhibit characteristic features, dependent on their chemical composition, in the x-ray absorption near‑edge structure (XANES) at the S K‑edge, exploited in previous studies [5-8]. However, a drawback in these previous measurements was the data collection geometry in which the x-ray beam was penetrating the cell through the backside of the sulfur electrode.

In this work, we introduce a novel spectro‑electro­chemical cell which allows direct observation of intermediates in the separator and use it to explore the influence of the electrolyte solvent’s dielectric constant on the conversion of polysulfides to Li2S by comparing solvents with a low-dielectric constant (DOL:DME, 1:1 v/v) and a high-dielectric constant (DMAC), the first discharge curves of which are shown in Figure 1.

Figure 1: Galvanostatic discharge curves measured in operando mode at a C-rate of 0.1 h-1 using either DOL-DME (1:1 v/v) or DMAC, each containing 1M LiClO4 and 0.5M LiNO3. 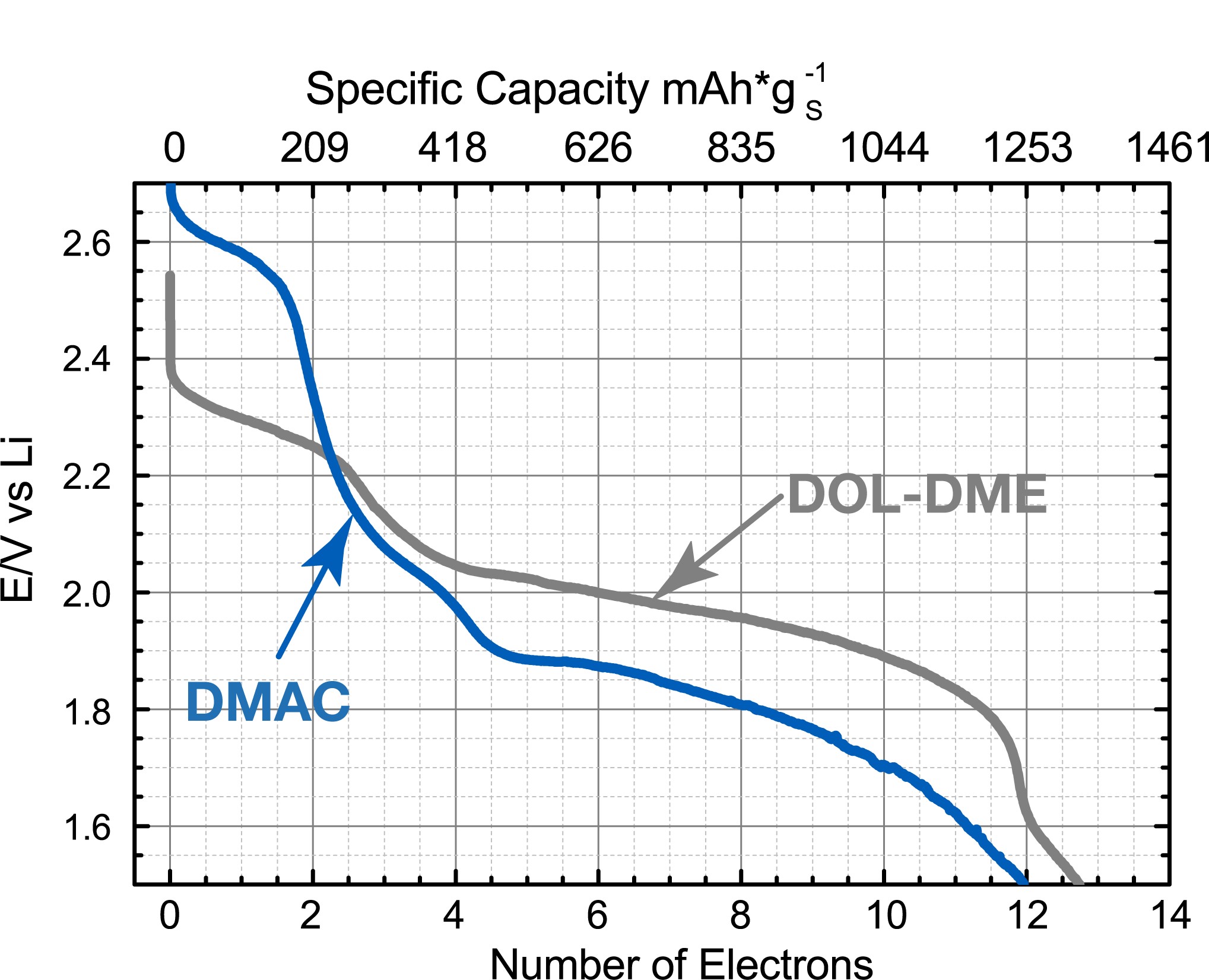