PDR 5 (Hilton Chicago)
C. Wang and C. L. Hussey (University of Mississippi)
There is increasing interest in the use of chloroaluminate ionic liquids (ILs) as solvents for the electrodeposition of aluminum.  This effort is to replace the electrochemical solvent currently used for the commercial plating of aluminum in the Siemens Sigal process, which is based on pyrophoric alkylaluminum fluoride compounds dissolved in toluene. Low melting chloroaluminate ILs such as AlCl3-1-ethyl-3-methylimidazolium chloride (AlCl3-EtMeImCl)1are popular choices for this application.  Although reactive with moisture, these non-flammable ILs are otherwise relatively benign.  BASF SE recently marketed a successful aluminum plating technology based on this ionic liquid.

The plating of Al from organic salt based chloroaluminates must be carried out under Lewis acidic conditions (> 50 m/o AlCl3) so that the reducible species, Al2Cl7-, is present in the IL

This requirement stems from the fact that the reduction potential of the coordinately saturated AlCl4- ion is more negative than that for the organic cation.  This factor prohibits Al plating in basic and neutral (£ 50 m/o AlCl3) ILs.  However, Al2Cl7- (AlCl3) can be introduced into these ILs by the anodization of Al in order to change the composition to > 50 m/o AlCl3. Furthermore, during Al plating from this IL, an aluminum anode must be present in an undivided cell to resupply Al2Cl7-that is lost from the ionic solvent during the plating process.

Although the electrodeposition of Al from organic salt-based chloroaluminates has been thoroughly investigated for more than 50 years, virtually nothing is known about this anode reaction, i.e., the reverse of Eq. 1.  Recent work in our laboratory involving Al anodization in the related inorganic molten salt, LiAlBr4-NaAlCl4-KAlCl4 (3:5:2), determined that under certain conditions this process is complicated by passivation of the Al electrode with AlCl3(s).  In the absence of passivation, this multistep reaction is itself relatively slow, proceeding under mixed kinetic/mass transfer control.2

In this presentation, we describe an investigation of the anodic dissolution of Al in AlCl3-EtMeImCl (> 50 m/o AlCl3) carried out with rotating disk electrode (RDE) voltammetry.  Figure 1 shows current-time plots recorded during potential step experiments at an Al RDE. The anodization process becomes limited by passivation of the Al electrode as the rate of the anodization process is increased and/or the temperature is decreased. As expected, this phenomenon occurs more readily in ILs with greater Lewis acidity.  At smaller overpotentials, where passivation can be avoided, Levich plots recorded at the Al RDE (Fig. 2) were non-linear, indicating that Al anodization proceeds under mixed control in this ionic solvent as well.  The exchange current density, j0, for the anodization reaction was determined as a function of the IL composition by using classical Tafel analysis (Fig. 3).  The mechanism of the anode reaction, and its implication for high rate Al plating will be discussed.

ACKNOWLEDGEMENT :This work was funded by the Strategic Environmental Research and Development Program (SERDP) through contract DE-AC05-00OR22725. 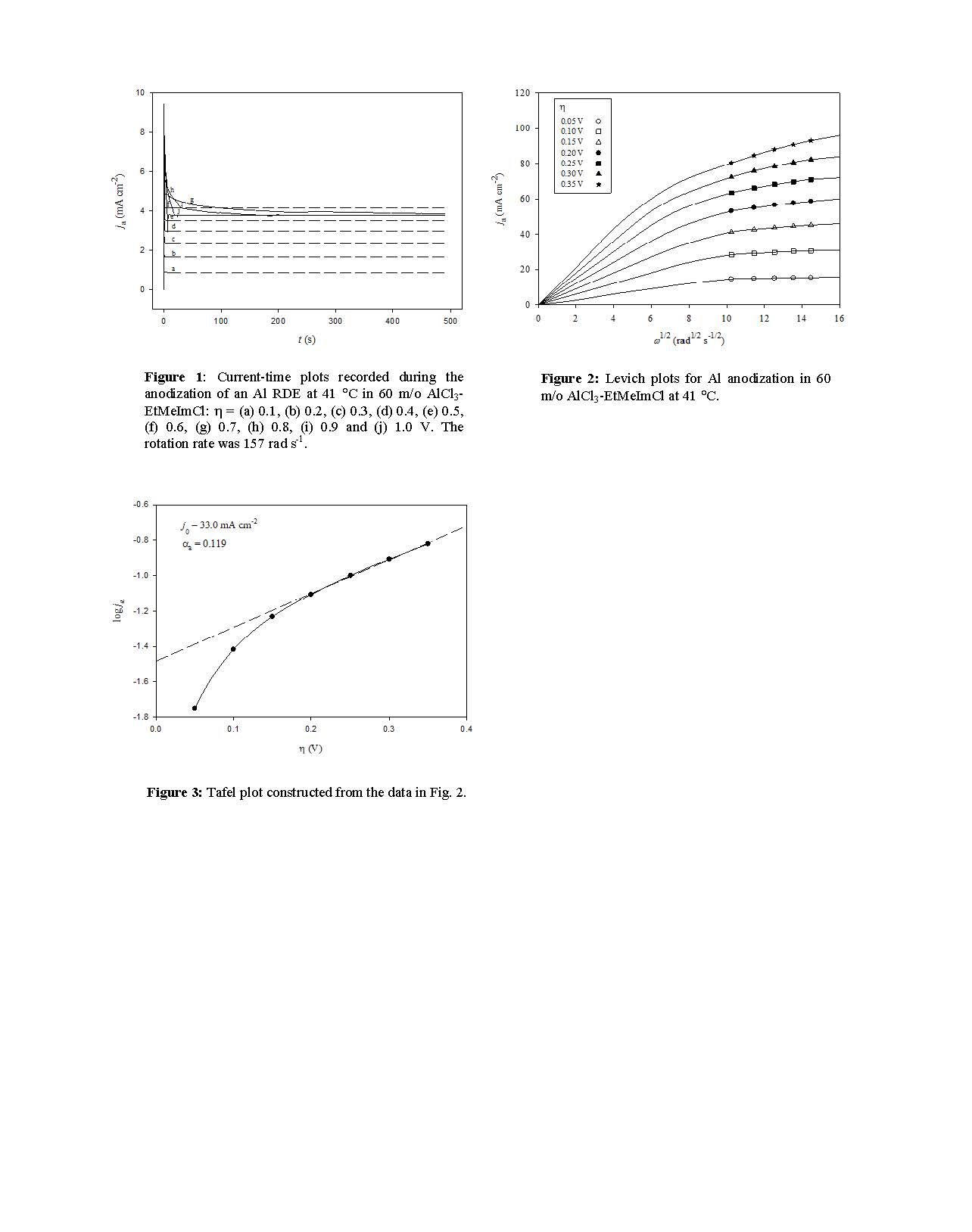