PDR 5 (Hilton Chicago)
M. Baytekin-Gerngross, M. D. Gerngross, J. Carstensen, and R. Adelung (Faculty of Engineering, University of Kiel)
Polymer coatings are used to produce composites, gluing metals to other materials, or as protective coating against corrosive environments, e.g. corrosion prevention of underwater vessels, boat hulls or composite-based lightweight turbine blades. When fabricating such metal/poly-mer composites, the typical challenge is to achieve sufficient adhesion between the metal surface and the polymer, so that no adhesive failure occurs e.g. moist or corrosive environment [1]. The most common method to increase the adhesion is a mechanical roughening of the metal surface followed by the use of chemical adhesion promoters [2].

Our approach to overcome this adhesion issue is the formation of a mechanical interlocking structure in the metal surface which allows for establishing a robust connection between metal and polymer resulting in a drastically higher adhesion between both. This work shows the fabrication of interlocking surfaces for two typical alloys, Ti grade 9 and AlMg3-W19, by chemical etching and their impact on the adhesion in metal/polymer composites.

In this work Al alloy AlMg3-W19 (AW5754) and Ti grade 9 (Ti-3Al-2.5V) was used – Ti grade 9 as representative for aircraft and AlMg3-W19 as typical representative for shipbuilding and automotive applications. The Ti grade 9 samples were etched in a viscous electrolyte of HCl and H2SO4at room temperature for 20 h. The AlMg3 alloy samples were etched in an aqueous HCl solution at room temperature for 1 h. To evaluate the adhesion performance metal/polymer/metal composites are formed with a solvent-free polyurethane (PU) as polymer component. The metal components are the chemically etched AlMg3-W19 bars, resp. grit-blasted as reference. The composites are then tested in lap shear tests based on the German standard DIN EN 1465 on a Zwick QuickTest 100 kN machine with a displacement rate of 1 mm/min.

Figure 1a shows an SEM surface image of the resulting surface structure of the Ti grade 9 sample after chemical etching. It can be seen that the surface exhibits a sponge-like structure consisting of single bowls, see inset in Fig. 1a), with undercuts acting as barbs, as described in [3]. When filled with polymers this structure is expected to establish a very robust interlocking between Ti grade 9 and the polymer.

Figure 1b) presents SEM surface image of the nano-/microstructured AlMg3 after chemical etching. It gives a macroscopic impression of the structured AlMg3 surface after etching in the electrolyte for 1h. One observes a highly irregular surface structure over the entire sample surface. The dark spots are structures deeper etched into the Al surface, while the bright spots represent structures that stick out of the surface. One also observes that the surface structure consists of a multitude of rectangular structures with flat faces either in a step-like arrangement or as free-standing structures, so called barbs. These rectangular structures have different sizes and are also tilted towards each other under various angles with respect to z-axis depending on the crystal orientation. Due to these fine structures a robust connection between the Al surface and the polymer coating is obtained. 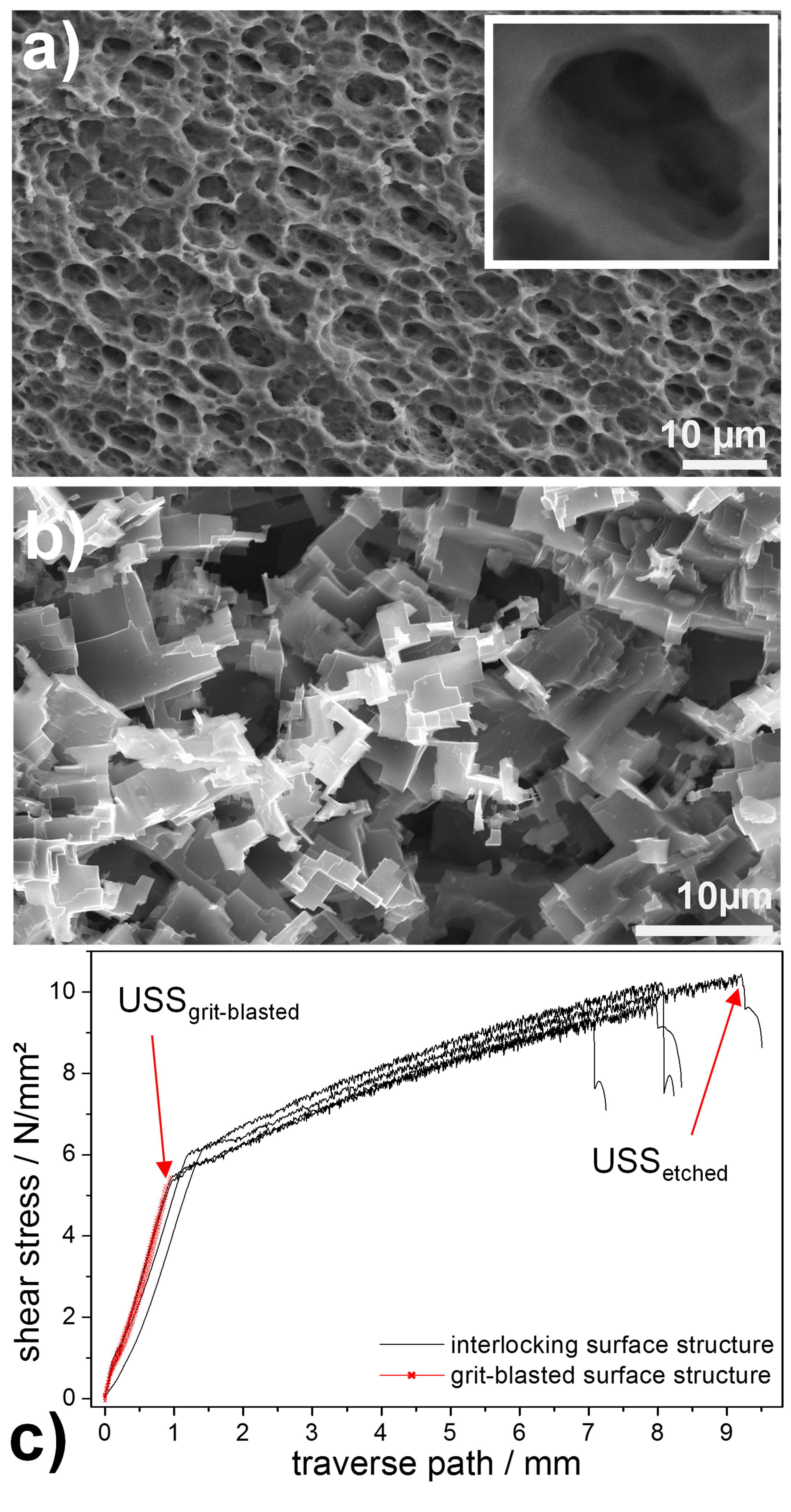