Continental Room A (Hilton Chicago)
X. Qu, N. N. Rajput, and K. A. Persson (Lawrence Berkeley National Laboratory)
The ability of Mg rechargeable battery to provide much higher volumetric capacity at a lower cost makes the technology an attractive candidate for future batteries. Early studies have shown that most organic solvents and common salts fail to enable reversible plating and stripping of the Mg metal anode due to formation of a passive layer blocking ion transport at the electrode interface.1 Particularly, in the case of Mg(TFSI)2 conflicting concentration-dependent cathodic stability at Mg reduction potential is reported.2–6

We studied both the electrochemical stability and chemical decomposition of promising electrolyte candidates using quantum mechanical calculations. We employed a systematic approach, using an electrolyte matrix consisting of 8 anions and 7 solvents. The anion electrochemical stability windows (IP/EA) were calculated for all the combinations in the chosen electrolyte matrix at the B3LYP/6-31+G* level. It was found that all the anions except bis(malonato)borate are predicted as stable in the well solvated form. However, we have previously established that Mg salts are much more prone to ion pair formation at moderate (> 0.5 M) concentrations as compared to Li electrolytes.7 Comparing the electrochemical stability of the well-solvated anion to the ion-paired complex reveals that, although free anions are stable, the ion pair complexes (e.g. Mg2+TFSI-) are significantly easier to reduce. Moreover, Mg2+was identified as the main reduction site, which corresponds to a partial charge transfer at the Mg metal electrode.

We calculated all the possible bond dissociation energies (BDE) for the reduced (transient) MgTFSI, MgBF4 and MgBH4 ion pair complexes. Figure 1 shows the result for the Mg – TFSI case. It can be seen that the anion C-S bond is stable for the well solvated form as well as the Mg2+ ion pair form (Mg2+TFSI-) with a BDE of 2.49 eV and 2.34 eV, respectively. However, the Mg+ cation dramatically decreases the C-S BDE to 0.07 eV. The extremely low BDE strongly indicates that the transient Mg+TFSI- complex is likely to rapidly decompose to into the fragments CF3 and [CF3SO2NSO2]Mg. However, such an effect is not observed for BF4 and BH4. This Mg+ initiated TFSI decomposition mechanism may provide an explanation for the conflicting reports on TFSI stability at Mg metal potentials2–5 and the recently found concentration-dependent formation of a blocking layer .6

Acknowledgement:This work was supported as part of the Joint Center for Energy Storage Research (JCESR), an Energy Innovation Hub funded by the U. S. Department of Energy, under Contract No. DE-AC02-06CH11357. High performance computational resources for this research were provided by the National Energy Research Scientific Computing Center, which is supported by the Office of Science of the U.S. Department of Energy under Contract No. DE-AC02-05CH11231. The Materials Project (BES DOE Grant No. EDCBEE) is acknowledged for infrastructure and algorithmic support. 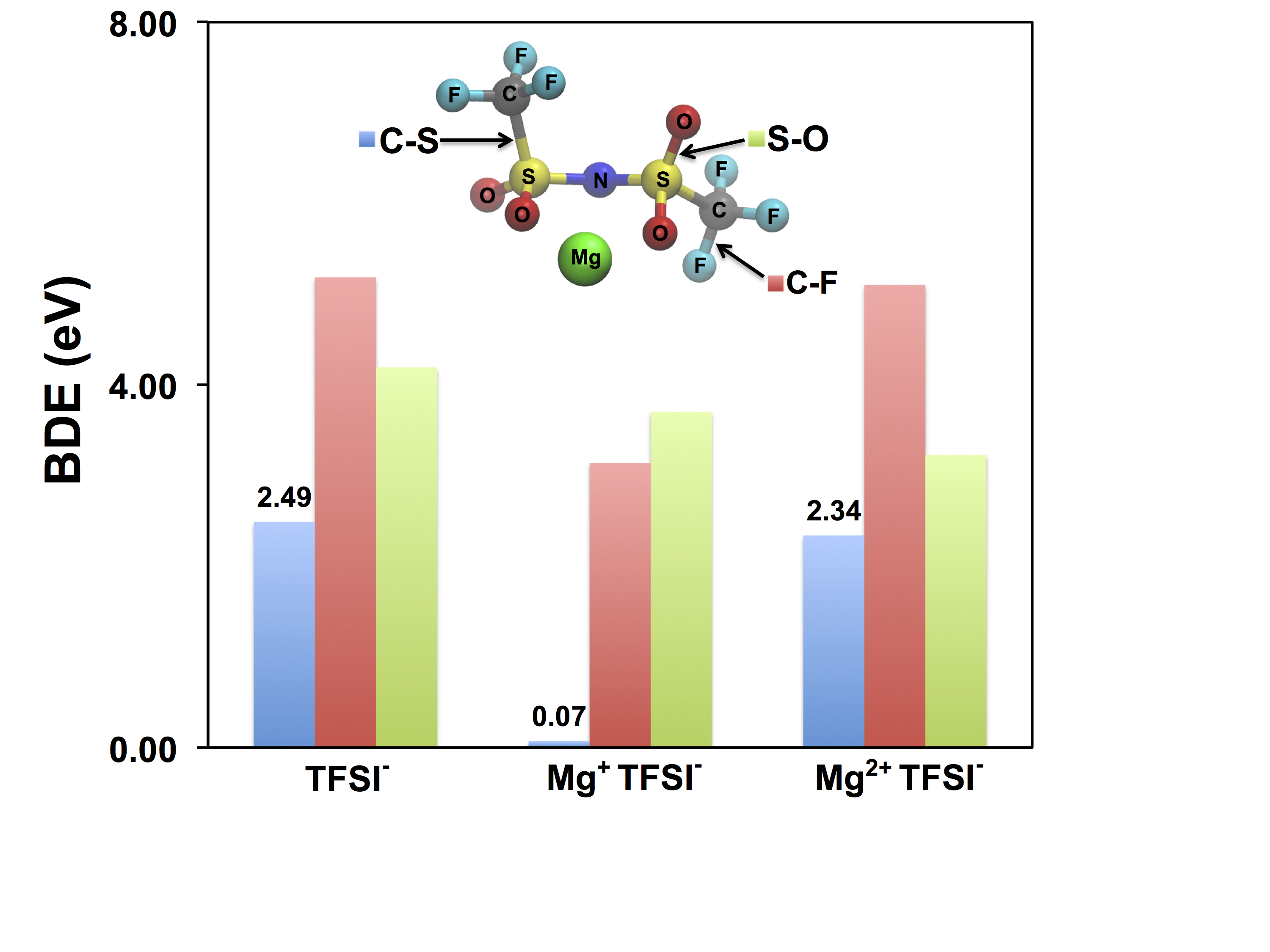