Conference Room 4H (Hilton Chicago)
S. Babanova (J. Craig Venter Institute), I. Matanovic, A. T. Perry III, A. Serov, K. Artyushkova, and P. Atanassov (University of New Mexico)
Electrochemical oxidation of organic compounds is a widely used approach for wastewater purification, energy production, and synthesis of value added products. In all cases listed noble metals are used as catalysts due to their high activity and lack of selectivity. Unfortunately these catalysts are expensive, which hinders their large-scale application for wastewater purification. At the same time Nature not only found the right answer for pollutants removal, but uses these electrochemical oxidation processes to gain energy. Numerous redox enzymes (mainly oxidases and dehydrogenases) are capable of fast, efficient, and selective oxidation of complex and simple organic compounds.

The enzyme high redox activity is a result of years of evolutionary improvements of enzymes’ structure and function. A key moment is the specific design of their active center supported by the surrounding amino acid residues and enzyme tertiary structure. The main problem with utilization of enzymatic systems is their short life and limited range of environmental conditions they are able to operate in. Thus, the development of more robust inorganic catalysts by mimicking the enzyme active center provides a new avenue in the development of electrochemical catalysis for oxidation of organic compounds.

The importance of oxalic acid, especially for clinical diagnosis and in food and water technology, is now widely recognized. Small carboxylic or dicarboxylic acids (such as formic, maleic, and acetic acids) are intermediate products in catalytic oxidation of aromatic compounds present in wastewater. At the same time oxalic acid is a compound that is toxic to almost all organisms. The accumulation of oxalic acid cause hyperoxaluria, formation of calcium oxalate stones in the kidney, renal failure, cardiomyopathy, and cardiac conductance disorders.

The developed catalyst, abbreviated here as MnAAPyr, is a non-platinum based catalyst. It has been synthesized using sacrificial support method [1], which was developed in our group mainly to synthesize materials with high activity towards oxygen reduction reaction. Along with its low cost, the main advantage of this catalyst is its high catalytic surface area i.e. the active sites of the material are situated within its own structure, turning it into a highly porous framework incorporating plenty of accessible active sites. The performed XPS analyses of the synthesized MnAAPyr show the presence of Mn-Nx coordination. Furthermore, DFT calculations were used to study the structure and the formation energy of the various Mn-Nxactive sites in which Mn is assumed to be coordinated with two, three, or four nitrogen atoms [2].

The activity of the MnAAPyr catalyst towards oxalate oxidation was studied using cyclic voltammetry at pH 4 and pH 7.5 (Fig. 1).  MnAAPyr demonstrated similar catalytic activity at both pHs.

The influence of the nature of the possible active sites was further evaluated using DFT approach by looking into the adsorption energy of oxalic acid and oxalate anion since this step was found to be the rate-limiting step in oxalate oxidation (Table 1 and Figure 2). As predicted by DFT oxalic acid and oxalate anion have the highest adsorption energy on Mn-N3, which implies higher activity of this active site in comparison to the other Mn-Nxcomposites.

The mechanism of oxalate oxidation was experimentally studied through FTIR and RRDE measurements. We were interested in CO2 production as well as in the possibility of H2O2 generation as a by-product in a similar fashion to the mechanism occurring when oxalate oxidase is used.

The activity of the MnAAPyr catalyst towards other small organic compounds was also tested. Along with the oxidation of small organics, it was established that this material shows electrocatalytic activity even towards oxidation of complex sugars such as glucose and sucrose. The broad range of organic compounds the catalyst can covert confirms its applicability in wastewater treatment and energy harvesting, where non-selectivity of the catalyst is beneficial. 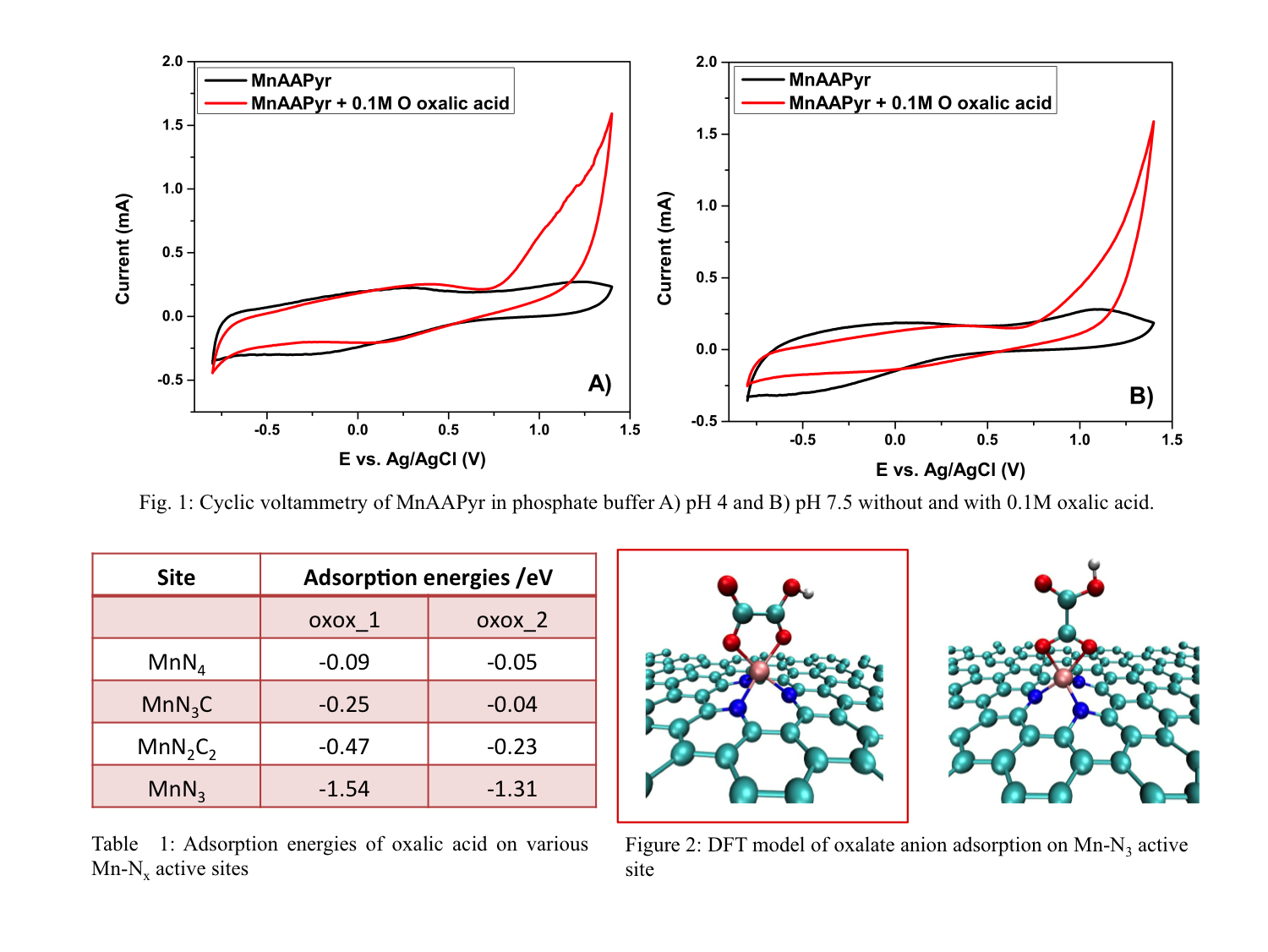