The conversion of chemical potential energy into kinetic energy from different gaseous and liquid fuels is quite low. Fuel cell technology has been extensively researched to combat these issues. Fundamentally, these fuel cells are driven by electrochemical kinetics and intrinsic kinetics at the catalyst layer. Recently, interest to catalysts which can electroreduce oxygen during the cathodic and evolute oxygen during anodic cycles (bi-functional catalyst) was significantly grown from manufactures of metai-air batteries, electrolyzers and regenerative fuel cells. Presently, the most conventional bi-functional catalysts are made from Pt-group elements (Pt, Ir, Ru etc). It has also been discovered that by placing these on commercial carbon supports that have high surface area, it enhances their activity [1]. The main drawback and need for more catalyst research is the incredibly high cost and low abundance of Pt-group elements.

The goal of this research has been to create a catalyst that is stable in alkaline media, have high surface area, is easy to synthesize, can be produced at lower cost and still have high bifunctional electrocatalytic activity. The materials of choice was a spinel-based unsupported CuCo2O4catalysts. The Sacrificial Support Method (SSM) was one of four synthetic approaches [2-6].

High surface area silica (Cab-O-Sil™ EH-5, surface area: ~400 m2 g-1) was dispersed in water on the ultrasonic bath. Then, the calculated amounts of Cu(NO3)2*xH2O and Co(NO3)2*6H2O (Sigma-Aldrich) were added to the silica colloidal suspension. Total loading of metals on silica was calculated to be 23wt%. Silica and precursors mixture was allowed to dry in an oven overnight at T=85ºC. The dry mixture of silica and nitrates was calcined in air at T=550ºC for 3h. The silica support was etched by means of 7M KOH overnight. The obtained wet powder was washed with DI water until a neutral pH was achieved. After drying at T=85ºC, the powder was used for physico-chemical and electrochemical characterizations

Characterization. The catalysts were characterized by BET, SEM, TEM and XRD methods. Catalytic activity for ORR and OER were measured in alkaline media using the RRDE method [7]. The counter electrode used was a Pt wire and the reference electrode was a Hg/HgO reference electrode corresponding to an RHE of 0.926 at 25°C. The inks for the RDE experiments were prepared by mixing the catalyst powder with an optimized amount of the ionomer Nafion™ in an IPA/H2O solution. The Nafion™ is used as a binder for the catalyst as well as a proton pathway in the ORR and OER. Homogeneity of the inks was achieved by means of sonication using an ultrasound probe.

As it can be seen from the XRD images in Figure 1the spinel phase pure structure was formed only in case on usage of SSM.

Further in this research we have correlated amount of CuO with decrease of activity in both ORR and OER. DFT calculations confirmed our hypothesis.

Synthesis of spinel-based catalysts by SSM was investigated. Upon examination of the physical characteristics, it can be assumed that further modification is necessary to design of the electrocatalysts. The electrochemical characteristics from the RDE experimentation proved that the catalysts are bifunctionally active and can act as a replacement for conventional Pt-group catalysts in the appropriate conditions. 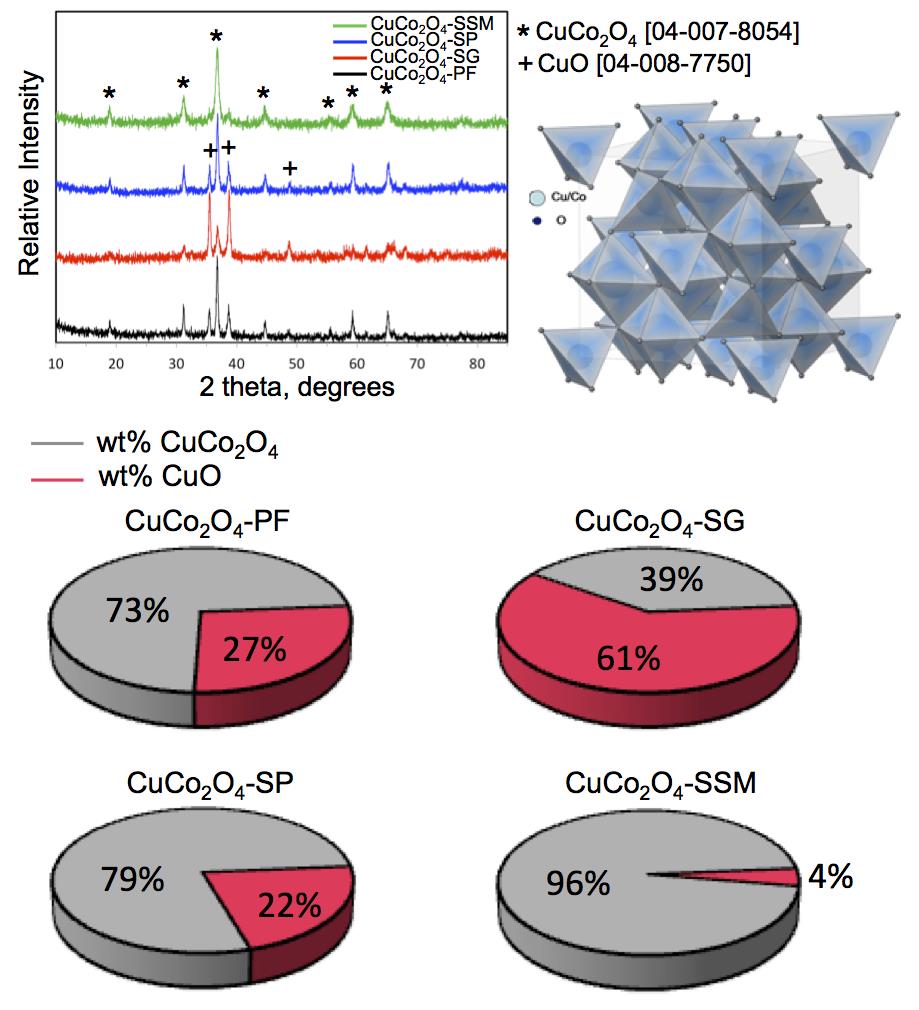