Similar to the geometry of our first generation Cu-based sensor [1], the sensor in this work consists of a three-electrode system fabricated in Cu.  Two shorted IDA fabricated in Cu form the working electrode (WE), with finger width/spacing of 10 µm/5 µm.  An auxiliary electrode (AE) was formed in Cu, while the reference electrode (RE) was formed as Cu/CuCl2.  A batch-fabricated array of electrodes on flexible PET film are shown in Fig. 1a.  The fabrication process includes a single photolithography step, followed by wet etching to define electrode patterns.  The RE is formed by oxidizing Cu in presence of chloride.  The USB style four connection pads of the sensor are designed for simplify in connecting to a potentiostat.

The potential window of the sensor for anodic stripping was confirmed by cyclic voltammetry (CV).  As shown in Fig. 1b, the potential window spans from approximately -0.85 V to 0 V (vs. Cu/CuCl2RE) in 0.2 M, pH 5.5 acetate buffer (blue curve).  As expected, this is similar to our previous design [2].  This potential window is sufficient for determination of Pb.  The voltammogram of 100 ppm (483 µM) Pb (red curve) exhibits two oxidation peaks of Pb at ~-0.47 V and -0.3 V, which are believed to be due to high metal concentration.  High metal content in sample can result in a large portion of Pb to be stripped-off on top of a Pb surface (appearing as a more negative peak), while the remaining thin layer of Pb strips-off the solid Cu WE as (which generates signal peak at the expected, more positive potential).

The sensor offers great performance in acetate buffer (0.2 M, pH 5.5).  Fig. 2a illustrates anodic stripping voltammograms in the 20-200 ppb (96 nM-960 nM) of Pb range in 100 µL samples.  The small peak in the background cure (dark grey) is considered with interference of oxygen during preconcentration, which can be removed by sacrificing the simplicity of the system and de-aerating the sample.  Calibration curve for determination of Pb after baseline subtraction, which was used to remove interference and to ensure accuracy of measurements, is shown in Fig. 2b.  This sensor exhibits a low limit of detection (LOD) of 49.6 nM (10.3 ppb) with a good sensitivity of 4.1 µA/µM and good linearity (R2=0.99) below 1 µM.  These performance metrics are comparable to that of our first generation Cu-based sensor [2].  The addition of IDA structure however increased signal strength, by improving signal-to-noise and reducing surface charging effects on the WE.  As we showed previously, ASV of Pb can provide stable response in environmental samples with no need of complex pretreatment and demonstrate there is no Pb contamination in river water sample.

In conclusion, we developed an improved electrochemical sensor for determination of trace Pb.  With the integration of PET substrate, the sensor is disposable and could be widely applied in point-of-care applications.

Fig1. (a) Image of an array of Cu sensors with IDA WE on a flexible PET substrate, with the AE, WE and RE indicated.  (b) CV scans of background in acetate buffer, 0.2 M, pH 5.5 (blue) demonstrating the potential window, and in 100 ppm Pb (red) demonstrating Pd reduction and oxidation peaks.

This work was supported in part by funds provided by the NIEHS award R01ES022933. 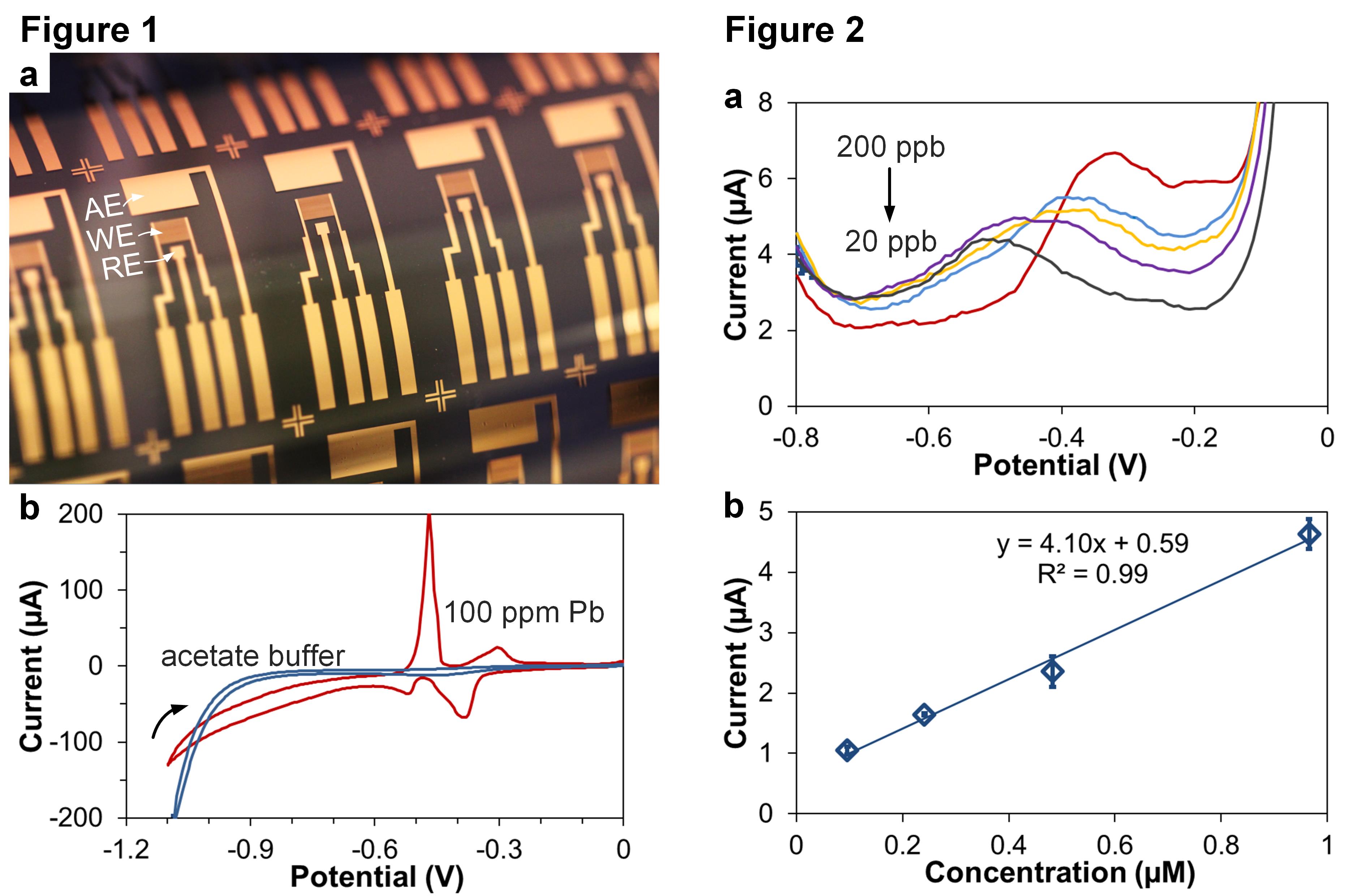