Continental Room C (Hilton Chicago)
J. Jiang (University of Illinois at Urbana-Champaign)
Arsenic is a highly toxic element and a relatively widespread water pollutant which is thought to be poisoning significant amount of people in various developing countries [1]. Exposure to arsenic can cause a variety of adverse health effects, including dermal changes and respiratory, cardiovascular, gastrointestinal, genotoxic, mutagenic, and carcinogenic effects. Contamination of groundwater by arsenic has been reported in 20 countries where arsenic levels in drinking water are above the World Health Organization’s arsenic guide line value of 10 mg L-1. Many detection methods have been developed for determination of such levels of arsenic. These include inductively coupled plasma mass spectrometry (ICPMS), graphite furnace atomic absorption spectrometry, and high-performance liquid chromatography with ICPMS. However, the most reliable techniques are more suitable for laboratory conditions only and are time-consuming. They cannot thus be used for routine in-field monitoring of a large number of samples. Electrochemical techniques provide a possible means to this end since they are both rapid and portable. 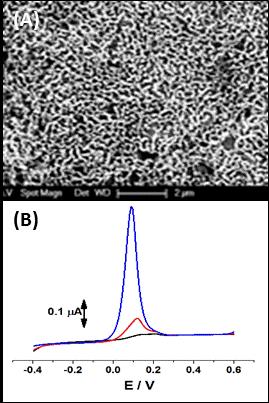