Conference Room 4L (Hilton Chicago)
F. Hain (Technische Hochschule Mittelhessen, Universitat Rovira i Virgili), C. Lammers, F. Hosenfeld (Technische Hochschule Mittelhessen), H. Klauk, U. Zschieschang (Max-Planck-Institute for Solid State Research), B. Iniguez (Universitat Rovira i Virgili), and A. Kloes (Technische Hochschule Mittelhessen)
Models for the current calculation in organic field-effect transistors (OFETs) are usually based on the typical MOSFET equations. Two different independent equations connected by the threshold voltage are used, in which the threshold voltage is usually a fitting parameter without relation to physical parameters hence the impact of their variability on the threshold voltage is not clear.

We present a modeling approach for the device current in OFETs which is physically- and charge-based with a continuous equation for the channel current in organic field-effect transistors.

It is assumed that the conducting channel of an OFET is reduced to a small number of monolayers of a specific thickness dm where the accumulated charge is uniformly distributed [1] as well as that all traps are filled in the on-state of the device (trapped charges qNt). The accumulated mobile charge per area Q’m is calculated and is a function of that specific thickness dm, the density of shallow traps Nc, and the surface potential ΦC. While calculating the mobile charge Q’m via the Poisson’s equation it gets obviously that there is no closed form solution for the surface potential ΦC. So it is solved once numerically for a given voltage VGS=V0 and kept constant for a given technology. The value of that (arbitrarily) chosen voltage within the operating regime and the corresponding mobile charge Q’m0 have almost no influence on the final result of the current and the threshold voltage. Closed form solutions for mobile charges at the source/drain end of the channel have been derived [2] and are used for the calculation of the channel current IDS/channel considering a diffusion and a drift part of the current. In the presented approach the mobile charges densities are a function of VGS, Q’m0, and V0. An expression of the threshold voltage Vthis also found.

The model is verified with measurements on OFETs fabricated with small molecules (Fig. 1), implemented in Verilog-A, and currently tested for circuit design. 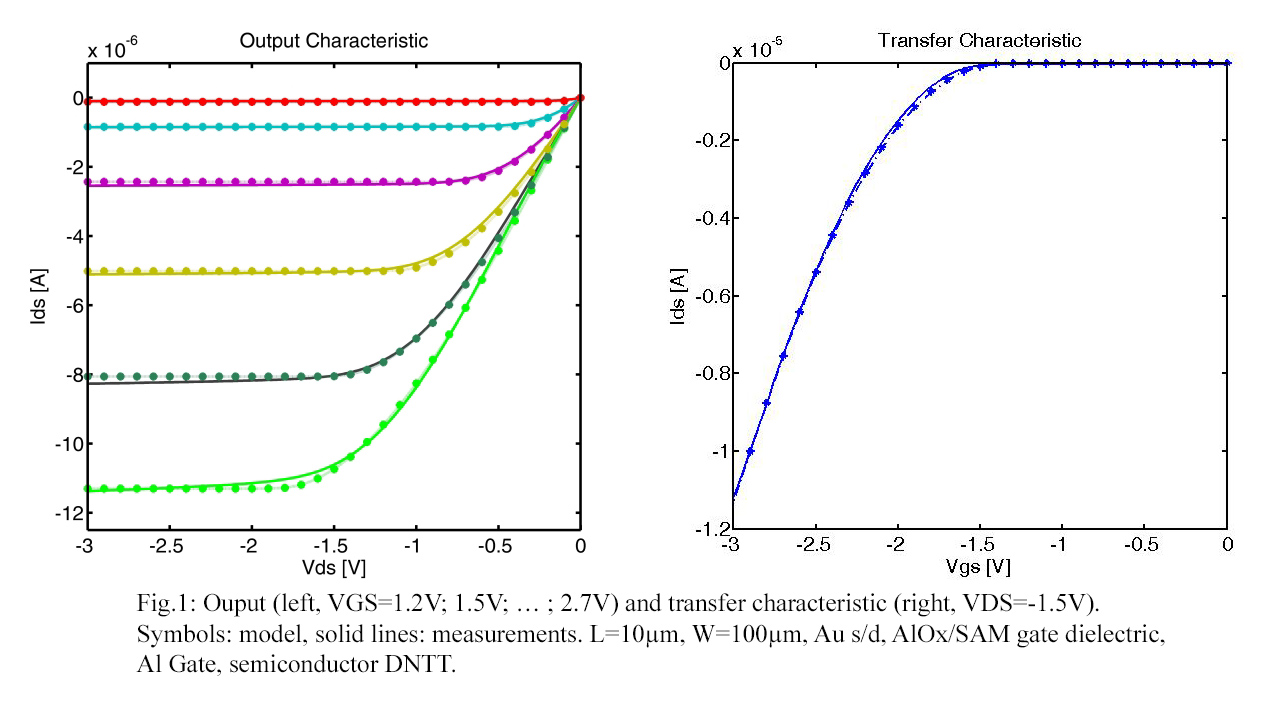