Formic acid has shown great potential as a fuel because it has low toxicity, implies easy and safe transportation as a liquid, has a relatively high power density, does not require a reformer, and it is not limited by polymer electrolyte membrane (PEM) crossover or sluggish anode kinetics like methanol. Palladium has been well studied as an electrocatalyst for the oxidation of formic acid and is preferred in this application because it oxidizes formic acid by dehydrogenation, avoiding the formation of a site-blocking, CO-like intermediate. The addition of surface adatoms, like Bi or Sb, can further enhance the formic acid oxidation (FAO) activity and durability of Pd-based electrocatalysts by electronic or ensemble effects.

We have established a novel route for the synthesis of palladium nanotubes (PdNTs) by the chemical vapor deposition (CVD) of Pd(II)(2,4)-pentanedionate as conformal, nanoparticulate Pd films within the channels of a sacrificial anodic alumina (AAO) membrane. Prior to an optional heat treatment, the nanotube walls are nanoparticulate aggregates of 3.7 nm Pd crystallites. The tubular structures have 200 nm outer diameters and range in length from 1 to 20 μm. The Pd-decorated templates may be annealed up to 500°C to induce a series of morphological changes including crystallite growth, reductions in wall thickness, and promotion of nanoscale porosity. We previously demonstrated that porous platinum nanotubes prepared by this CVD technique and subsequent heat treatment are highly active as oxygen reduction electrocatalysts, with specific activities comparable to polycrystalline Pt.4Here, PdNTs were characterized by scanning electron microscopy (SEM) and X-ray diffraction (XRD).

PdNTs were characterized electrochemically with Rotating Disc Electrode (RDE) experiments. At 0.3 V vs. RHE, the annealed PdNTs have 3 times the specific activity and 1.4 times the mass activity of a commercial Pd/C. The irreversible adsorption of Bi on the surfaces of PdNTs resulted in a decrease in specific activity compared to the annealed PdNTs. However, surface adsorption of Bi adatoms was found to enhance the durability of PdNTs remarkably in chronoamperometry experiments. This work is supported by the National Science Foundation through TN-SCORE (EPS-1004083). 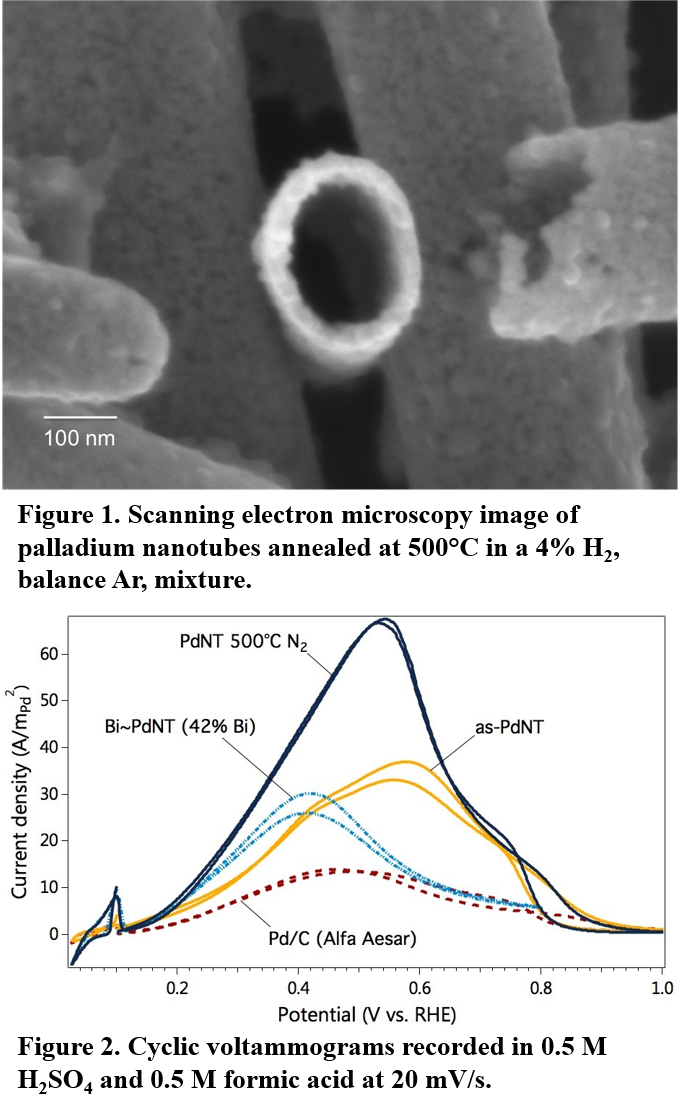