Lake Ontario (Hilton Chicago)
D. You and S. V. Rotkin (Physics Department, Lehigh University)
Our study aims to explore heat transfer mechanism between graphene and polar insulator substrate. We develop a thermodynamic theory of heat transfer between graphene and SiC substrate based on master equation method and establish the difference of our model to the results obtain earlier by Fischetti (Ref.[1]), their equilibrium theory will be compared with the steady state solution of our non-eqilibrium model.

Graphene has attracted much attention due to potential applications in thermoelectric and photoelectric devices. Thermal properties of graphene have been extensively studied both experimentally and theoretically: graphene has very high in-plane thermal conductivity. Thus the thermal applications might be likely limited by the out-of-plane heat transfer [2]. In this context, integration of graphene with a polar substrate, such as SiC, can modify the thermal properties of former [3].

In this paper, we consider strong coupling between the surface plasmon- and phonon-polaritons in graphene and the substrate, respectively. These modes were assumed to provide the efficient QED heat flux channels. Fig.1 (a) shows dispersion relations of two (infinite lifetime) eigenstates E1and E2strongly mixed due to the quasi-electrostatic interaction between surface plasmon- and phonon-polaritons.  Such localized surface modes are, in fact, dissipated into reservoir modes representing the bulk of materials, which can be calculated via the corresponding self-energy terms. This interaction between surface modes and their couterparts in the reservoirs (environmental modes) leads to the loss of the quantum coherence and the dissipation of their energy, when driven out of their equilibrium (with the reservoirs). Assuming weak system-reservoir interactions and a short reservoir correlation time, Markovian quantum master equations can be used to describe relaxation dynamics of our system.

Time evolution of the system was theoretically obtained. Assuming different temperatures for substrate and graphene, the coupled system is out of equilibrium which creates an non-zero net heat flux. The dynamics of the system towards the steady state can simulated. The average occupation shows an oscillatory behavior (Fig.1 d and e), here we consider the substrate being at a higher temperature. The heat flow from the surface optical phonon-like modes to graphene and from the substrate into the surface plasmon-like modes are shown in Fig.1b and c. In the steady state (long-time limit), the solution of our model does not coincide with thermal equilibrium state. 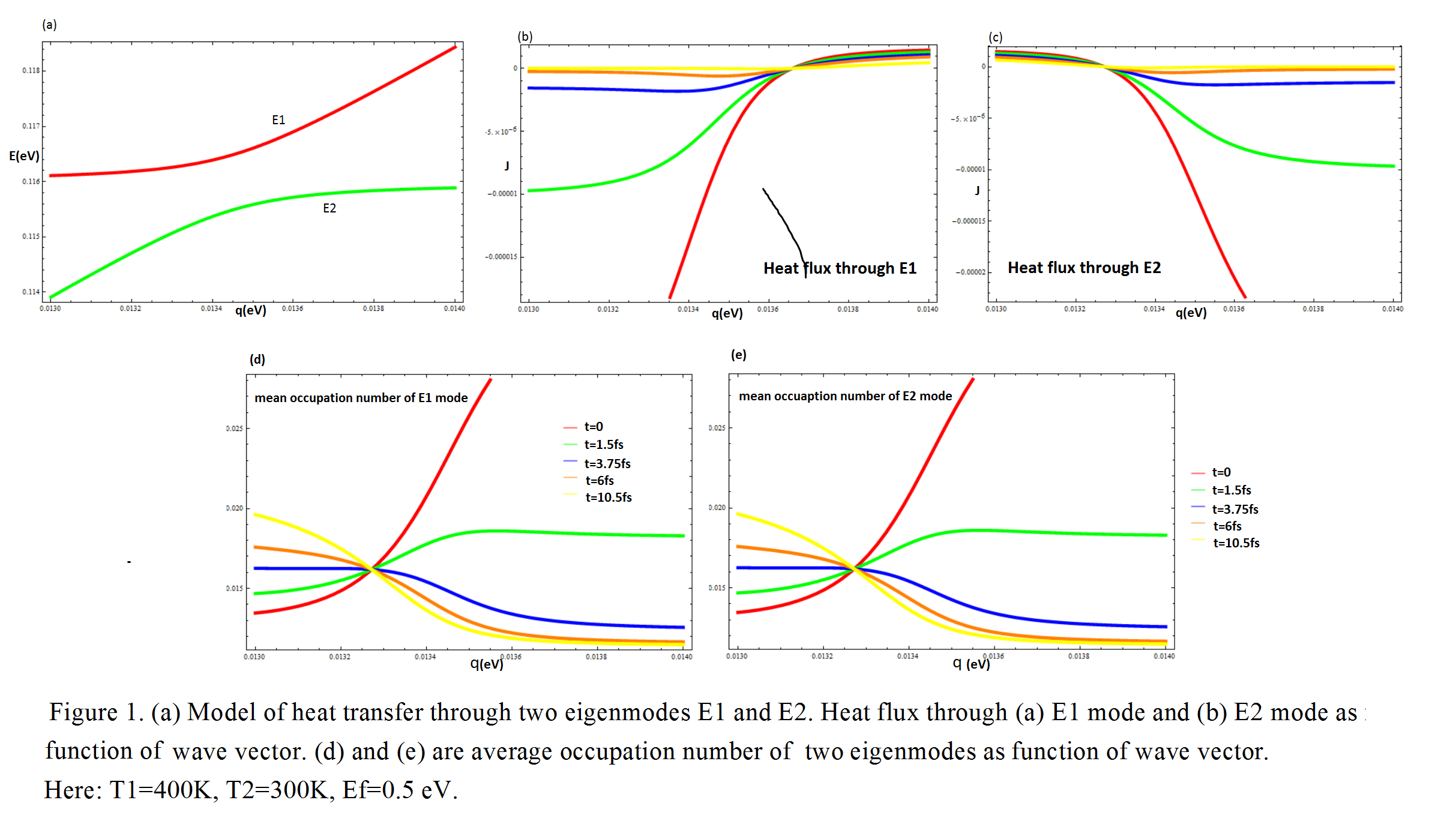