In the present study, relaxation analysis was performed on the Li inserted graphite after a charge/discharge cycle and the results were compared for the case of first Li-insertion.

Working electrode was prepared by mixing natural graphite powder (LB-CG, Nippon Kokuen) and PVdF with a ratio of 93 : 7 (weight ratio).  Lithium foil was employed as the counter electrode and EC/DMC (2:1 volume ratio) with 1 mol∙dm‑3 LiPF6was used as the electrolyte.  Lithium ion was inserted into graphite electrochemically using two electrode cell.  After the insertion, we extracted lithium ion from the sample, then we inserted lithium ion again into the sample.  Current rate and charge/discharge periods were all selected to be 0.1C and 10h, respectively.  Then two types of Li-GICs were prepared; the samples of lithium insertion at the first time (named 1st) and the second time (named 2nd).

After the termination of each sample preparation, we immediately removed the working electrode from the cell in a glove box to avoid the local cell reaction between the electrode material and the current collector.

XRD patterns from 11° to 53° in 2θ were measured by using CuKα radiaton (UltimaIV, Rigaku, Japan) for various relaxation time. We analyzed XRD patterns by the one-dimensional Rietveld method [6] using RIEVEC program coded by T. Yao[1-8]. Interlayer distances and scale factors of stage1 and stage2 were obtained.

XRD profile of the sample for each relaxation time after Li insertion was well fitted by the Rietveld calculation.  Fig.1 shows the obtained mole fraction changes of stage 1 for samples of 1st and 2nd, indicating that mole fractions of stage1 decrease and those of stage 2 increase with the relaxation time for both samples.  It is considered that defective stage 1 was formed at the lithium insertion process, and it separated into stage 1 without defect and stage 2 during the relaxation. The change in mole fraction became slower for the 2nd.  Fig.2 shows lattice parameters of c-axis for the stages 1 and 2.  The lattice parameters of stage 1 were almost constant and those of stage 2 decreased during the relaxation for both samples.

Although the structure of stage2 is generally presented as the stack of Li-inserted graphene layer and Li-not-inserted graphene layer, the stack of graphene layers with two different Li concentration at the interlayer also makes stage2 structure from the point of symmetry.  It is considered that, at Li insertion process, Li-rich interlayer (Dw) and Li-lean interlayer (Dn) stacked to construct stage 2, and that structure of stage2 changed into the stack of Li-inserted (Dw) and Li-not-inserted (Dn) graphene layers during relaxation.  Fig.3 shows two kinds of interlayer distance of stage 2, Dw and Dn, for both samples, where Dw increased and Dn decreased with the relaxation time.  The changing manner of Dw and Dnwere similar for 1st and 2nd samples.  It is considered that the process of structure change was similar for 1st and 2nd during the relaxation process, however, that the driving force from kinetic state to equilibrium state was weaker for 2nd sample than that of 1st sample by the loose of graphen layer stacking due to lithium ion insertion and extraction. 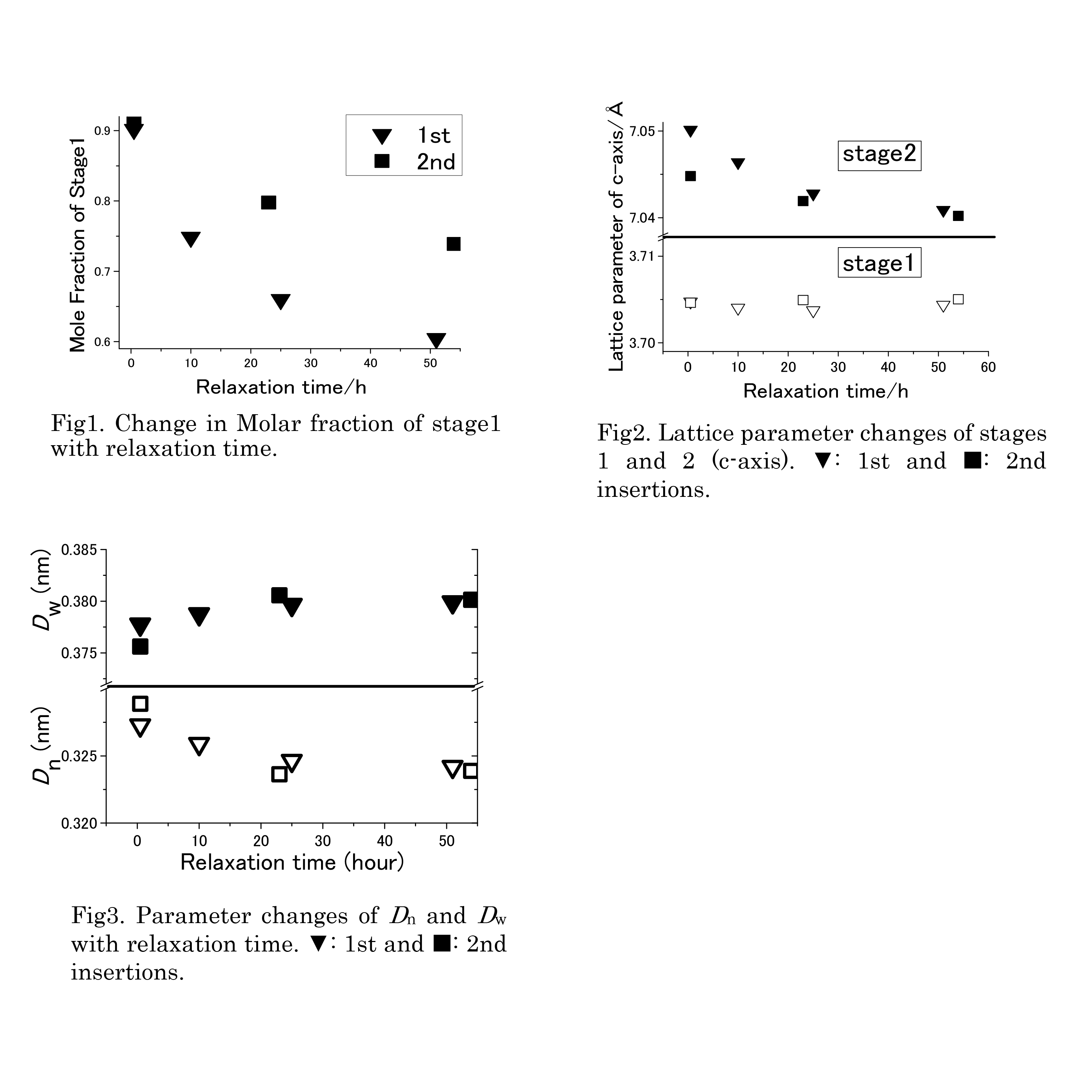