Salon C (Hilton Chicago)
A. Pena Hueso, M. L. Usrey, R. J. Hamers, and R. West (Silatronix)
Lithium bis(oxalate) borate (LiBOB) is a commonly used salt in lithium ion batteries due to its capability to improve the thermal stability and high temperature cycling. In addition, LiBOB is capable of forming a protective solid electrolyte interphase (SEI) layer on both graphitic anode and cathode surfaces and has been shown to passivate the aluminum current collector. While LiBOB has been pursued as a primary salt for lithium ion battery electrolytes1, it is most commonly utilized in commercial cells on the additive level with LiPF6as the primary salt because of its lower bulk conductivity and disadvantageous interfacial properties (i.e., higher impedance, lower charge transfer).

Despite multiple reports regarding the enhanced thermal stability of electrolytes using LiBOB as an additive, there is not enough understanding of the mechanism by which this improvement is achieved.2 In this work, the reaction between LiBOB and LiPF6 at 100°C in both carbonate and organosilicon-based electrolytes is described. Specifically, the reaction products formed when LiBOB reacts with LiPF6have been identified using nuclear magnetic spectroscopy (NMR) and tracked as a function of time.

The thermal stability of LiBOB-containing electrolytes was evaluated at 100°C using a custom analysis method where neat electrolyte samples were sealed in Teflon-lined glass NMR tubes. The LiBOB/LiPF6 reaction was tracked and quantified using 1H, 19F and 31P NMR. This work shows that the initial LiBOB degradation products are tetrafluorooxalatophosphate (TFOP) and difluorooxalato borate (DFOB). Over time, all of the boron from the LiBOB becomes tetrafluoroborate (BF4-) and the tetrafluorooxalatophosphate (TFOP) becomes difluorophosphate (O2PF2-). Once the TFOP and DFOB are consumed, the thermal protection of LiBOB disappears and degradation of the solvent with LiPF6begins. Therefore, the TFOP concentration can be used as a benchmark for predicting the onset of thermal decomposition.

This reaction pathway has been analyzed and quantified for several carbonate electrolytes (EC/DEC or EC/EMC, 3/7 by volume). 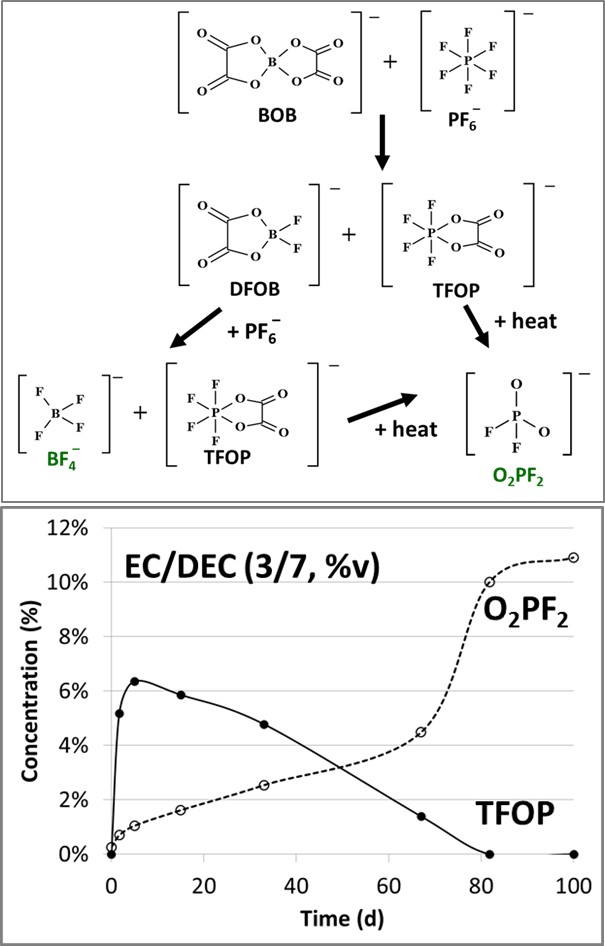