Continental Room B (Hilton Chicago)
R. Mingant and J. Bernard (IFPEN)
Electric vehicles (EVs)  are frequently seen as a solution to answer the several issues raised by conventional cars like dependence on fossil primary energy, local nuisances (atmospheric pollution, noise) and greenhouse effect. However the development cost of innovative EVs is still very high and battery lifetime has to be taken into account: consequently studies based on system simulations are very interesting in order to reduce development costs. The scope of this work is to develop and calibrate an aging model targeted to size and predict the lifetime of a battery for a specific usage in a school bus.

The case study is a school bus using a Li-ion pack including 18650 LFP/C cells arranged in modules. The pack sizing was not fixed at the beginning of the project, and would depend of the pack lifetime prediction.

Regarding cell aging, the structure of the proposed model1was an empirical law giving the evolution of the capacity loss over time (eq 1). A refinement2was proposed by adding a dependency SoC for variable B (eq 2). The calibration of this model was achieved by parameter fitting using a nonlinear least squares method on the results obtained in a dedicated aging campaign.

The aging campaign on commercial modules was performed by combining calendar and dynamic EV like tests. The calendar measurements were made on 4 modules of 18 cells connected in parallel and placed in an oven at different states of charge (SoC) and temperatures during 280 days. Capacity and resistance values were obtained with regular check-up. The cycling aging test was performed on 2 modules of 66 parallel cells. The cycling condition represented a custom 12 hours school bus journey with a complete charge in the middle and at the end of the delivery mission for 2 battery sizing. Two applied current levels reflected in fact the case of 1 pack or 2 packs onboard.

Fig 2 shows a comparison between the experimental data and the adjusted data. This representation shows that the adapted aging model is predictive for the studied period.

In order to predict the capacity loss in function of the time, the equation (1) was derived over time assuming the derivatives SoC and temperature versus time negligible, as in the calendar tests(eq 3). Thus, by using profiles of SoC and temperature measured during cycling, it was possible to compare the simulation results with the experimental results (Fig 3). This figure allows to highlight:

• A good prediction of the capacity loss for cycling aging profile type "2 packs" up to 160 days of cycling at 45 °C.
• Underestimating losses for the profile "1 pack" which is consistent with the likely appearance of another aging mechanism or kinetic on this current profile.

In conclusion, based on aging results and simulations, the “2 packs” configuration was chosen for the school bus. It is worth noting that the aging model also enables us to test the influence of charging protocol on the capacity loss of the battery. 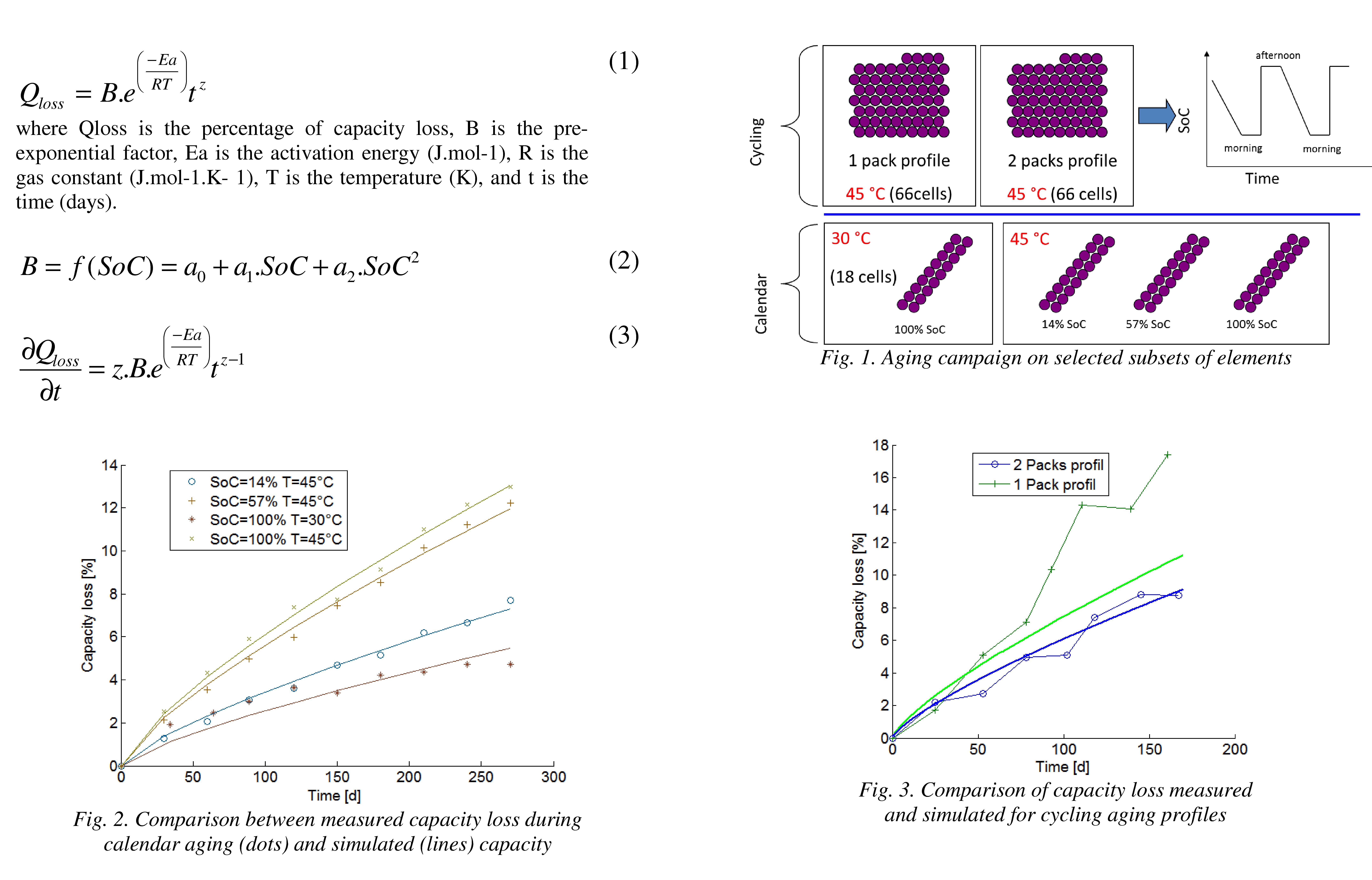