90
Comparison of Different Synthesis Methods for LiNi0.5Mn1.5O4 Regarding the Electrochemical Performance and Different Aging Mechanisms

Continental Room B (Hilton Chicago)
M. Börner, M. Grützke, B. Vortmann, P. Niehoff, F. Schappacher, and M. Winter (MEET Battery Research Center, University of Muenster)
Among the high-voltage cathode materials, LiNi0.5Mn1.5O4 is one of the most promising candidates for the use in commercial lithium-ion batteries. Apart from the dominant potential plateau at 4.7 V, the spinel exhibits a high structural stability. Furthermore, the partial substitution of manganese by nickel can improve the capacity retention during cycling compared to LiMn2O4.[1]However, the high operating voltage of up to 5 V can lead to continuous electrolyte decomposition and capacity fading during cycling.

Over the last years, a large variety of methods has been reported to synthesize LiNi0.5Mn1.5O4. The majority of these synthesis methods can be divided into wet chemistry based methods which implies the formation of a precursor in a solution (e.g. Co-Precipitation, Sol-Gel method, Modified Pechini method etc.) and solid-state methods where the reactants are heat-treated directly after mixing (Combinational Annealing method, One-step solid-state method etc.). While the wet chemistry based methods are able to produce powders of high chemical homogeneity with a narrow size distribution at low annealing temperatures, the synthesis procedures are rather complex and expensive due to long processing times and expensive precursor materials. The solid-state methods are mostly inexpensive and simple. However, the high annealing temperatures can lead to impurities and inhomogeneity. Alternatively, the Molten Salt method based on salts with a low melting point is a simple technique that yields high purity powders due to high diffusion rates in the molten media. [2]

The different synthesis methods yield LiNi0.5Mn1.5O4 particles varying in morphology and purity that strongly influence the electrochemical performance and the aging mechanisms. At high potentials the oxidative decomposition of the electrolyte leads to the formation of a passivation layer on the surface of the LiNi0.5Mn1.5O4 particles. With regard to the different particle morphologies it was reported that smooth surfaces lead to moderate surface reactions. [3] Another aging mechanism that has been studied by several research groups is the manganese dissolution into the electrolyte from LiMn2O4 particles during cycling. [4] The manganese dissolution can be significantly reduced due to the enhanced structural stability in presence of Ni2+. However, the transition-metal dissolution can still occur on the surface of the LiNi0.5Mn1.5O4particles due to natural local inhomogeneity of the crystal structure.

In this study LiNi0.5Mn1.5O4 powders were synthesized by three different methods and investigated regarding their electrochemical performance and aging behavior. The synthesis methods, namely Co-precipitation, Molten Salt method and Combinational annealing method [5] yield LiNi0.5Mn1.5O4 particles with varying purity and morphology as shown in the scanning electron microscopy (SEM) image in Fig. 1. The difference in the electrochemical performance of the electrodes based on these powders originates from several factors. X-ray diffraction (XRD) measurements were performed to investigate the crystal structure and impurities which are key factors to achieve high specific capacities and good performances. The post-mortem analysis of the cycled electrodes showed a passivation layer on the surface of the LiNi0.5Mn1.5O4particles due to the decomposition of the electrolyte at high potentials. The thickness of the passivation layer increased with the cycle number for the electrodes based on the powders synthesized by Co-Precipitation and Combinational Annealing method. In contrast, the Molten Salt electrodes showed only minor amounts of decomposition products on the surface of the particles. X-ray photoelectron spectroscopy (XPS) measurements confirmed these assumptions. The electrolyte analysis via gas chromatography mass spectrometry (GC-MS) revealed an increased concentration of decomposition products in the aged electrolytes. Furthermore the transition-metal dissolution was investigated by inductively coupled plasma optical emission spectrometry (ICP-OES). The results indicate increasing manganese and nickel dissolution and therefore a higher transition-metal concentration in the electrolyte of the aged cells with increasing cycle number. 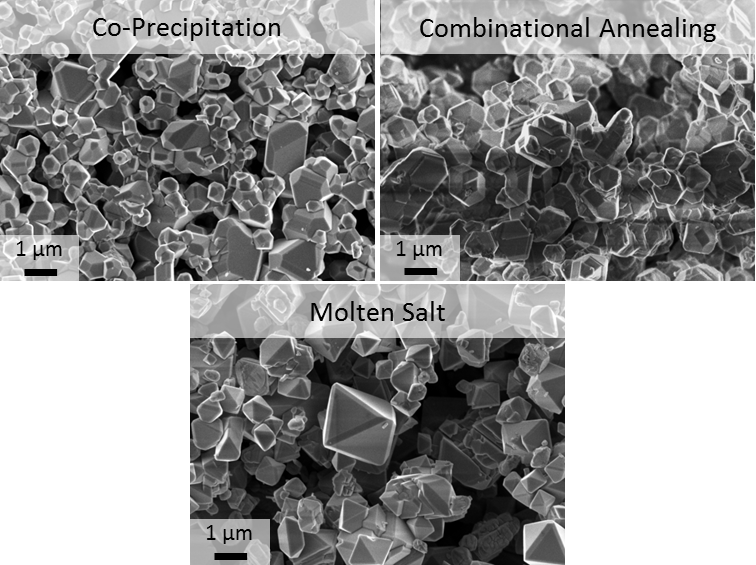