Nitride semiconductors are recognized as one of the most important materials for the optoelectronic devices and high-temperature high-frequency electronic devices, although the material quality is currently still insufficient to realize such great potential performance. In addition, residual stress inevitably exists in the epitaxially grown films due to the lattice mismatch and difference of thermal expansion coefficient.

Raman spectroscopy has been performed to evaluate GaN, AlN, and AlGaN in terms of crystal quality, stress and material compositions [1]. In our previous study, we performed oil-immersion Raman spectroscopy for the excitation of in-active, transvers optical (TO) phonons, from (001) Si and SiGe [2,3]. Moreover, we evaluated anisotropic biaxial stress state in Si and SiGe mesa-shaped structure using the forbidden phonons [4,5].

In this work, we focused on the Raman measurements for hexagonal GaN and report the excitation of E1(TO) phonon, which is one mode in wurtzite crystal with C6u symmetry [7]. The E1(TO) mode is generally Raman in-active under the backscattering geometry from c-plane GaN according to the Raman  selection rule [7]. We performed oil-immersion Raman spectroscopy in order to obtain the forbidden mode in c-plane GaN.

Figure 1(a) shows the schematic cross-sections of the samples. The samples are a 2.0-μm-thick c-plane GaN film with a 5-to 10-nm-thick nucleation layer on a the Al2O3 substrate and a 1.8-μm-thick c-plane GaN film with a 270-nm-thick buffer layer on a Si substrate. The Raman measurements were performed under the backscattering geometry from c-plane GaN and cleaved cross-section. The focal length of the spectroscope is 2 m, which allows us to obtain Raman spectra with a high-spectral resolution of approximately 0.1 cm-1[6].  The wavelength of the excitation laser was 532 nm. The numerical aperture (NA) and refractive index of oil were 1.4 and 1.5, respectively. In comparison, dry lens with the NA of 0.7 was also used (Fig. 1(b)).

Figure 2 shows the Raman spectra of GaN on Si and GaN on Al2O3 measured from the cross-section. The Raman peaks appear at around 535 cm-1, 560 cm-1, 570 cm-1, which can be identified as A1(TO), E1(TO), and E2 high phonon modes respectively [1]. Each peak position is different because stress states in the GaN layers should be depending on the substrates, Si or Al2O3. The stress calculated with the E2 peaks are -350 MPa and 650 MPa in GaN layers on Si and Al2O3, respectively[8]. Figure 3 shows the Raman spectrum for GaN on Al2O3 measured from the top surface under the oil-immersion conditions. In comparison, the Raman spectrum obtained in the dry condition is also shown. The peak on the left side of the large E2 peak can be seen in the oil-immersion conditions, although there is no peak in the dry condition. This peak position was 559.7 cm-1, which was almost the same as the peak of E1(TO) measured from the cross-section. As shown in Fig. 1(b), the aperture angle becomes significantly large in the oil-immersion condition, which leads to the generation of a z-component in the electrical field [2]. From the Raman selection rules, the z-polarization can excite E1(TO) mode [7]. Therefore, we concluded that E1(TO) can be detected even in the backscattering geometry from c-plane GaN by oil-immersion Raman spectroscopy. In oil-immersion Raman measurements, E2 high, A1(LO), and E1(TO) modes can be used for the detail evaluation of the GaN material properties, e.g., stress, material composition, and temperature.

We have demonstrated the excitation of E1(TO) from the c-plane GaN film by oil-immersion Raman spectroscopy, although E1(TO) is conventionally in-active under the backscattering geometry from c-plane GaN.

The authors thank Dr. Naomi Sawamoto for the TEM observation. This study was partially supported by the Japan Society for the Promotion of Science through a Grant-in-Aid for Young Scientists (B) (No. 25790049). 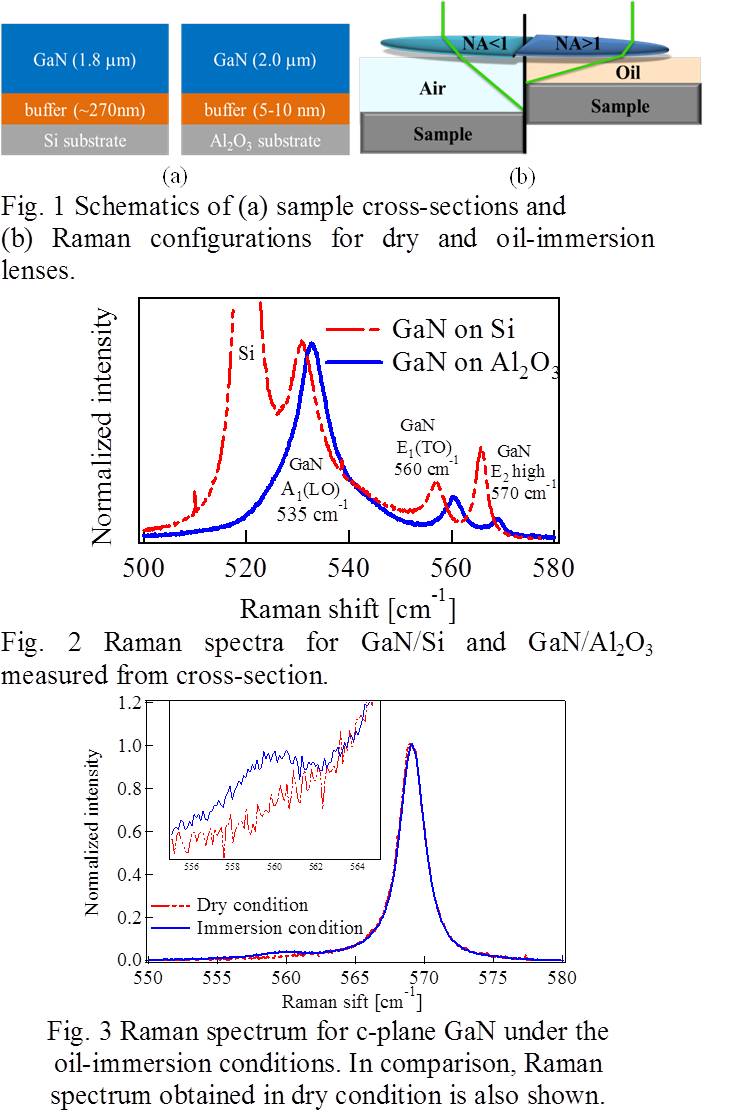