The energy crisis related to the consumption of fossil fuels has raised concern in many countries, thus the use of biofuels is an alternative to those fuels. In Brazil, in recent years has increased biodiesel production in line with current legislation, introducing biofuels in their energy mix. Biodiesel is a renewable fuel produced from transesterification of a vegetable or animal’s oil and an alcohol (methanol or ethanol), the process produces as a co-product glycerol. Glycerol has many industrial applications in industries: cosmetics, pharmaceutical, food and others, but the large amount produced is not absorbed by the industry, which has lost its market value and in a few years could pose damage to the environment.

The glycerol electrooxidation in platinum low index single crystal electrodes in alkaline medium is investigated in this work using techniques such as cyclic voltammetry and chronoamperometry.

Glycerol electrooxidation experiments were performed in a 0.1M NaOH and 0.1M glycerol solution. Electrochemical cell potential were controlled with a potentiostat (autolab). The platinum single crystals work electrodes ((111 ) , (100 ) and (110)) used were prepared by Clavillier’s method [1]. Previous to each electrochemistry experiment the work electrode was cleaned by flame annealing in an oxygen gas flame, cooled in H2/Ar atmosphere and protected with water in equilibrium with this gas mixture to prevent contamination before immersion in the electrochemical cell.

Figure 1 displays the cyclic voltammograms recorded at 50 mV/s for Pt(hkl) in 0.1 M NaOH. The dotted lines are blank voltammograms profiles of Pt(111), Pt(100) and Pt(110) electrodes in the absence of glycerol in the support electrolyte which are in good agreement with previously published results.

In presence of glycerol in the electrolyte, the electrochemical responses show the strongly reaction dependence to the electrode surface arrangement. As already documented for other small alcohols (methanol, ethanol, etc. ), at low potentials the surface is completed blocked by the adsorbates which are only oxidized at higher potentials ( < 0.45 V). The electrooxidation glycerol voltammograms expose the different reaction mechanisms for the three electrodes. These are not surprising results since the presence of alcohol group in each carbon in the glycerol molecule enables many possibilities of adsorbate species following by their oxidation:  producing soluble products or adsorbed intermediates.

It is interesting to note the hysteresis displayed for Pt(111) and Pt(110). For both surfaces, the positive and negative scans differ only by current density. The same was observed for the electrooxidation of ethanol in Pt(111) in alkaline media[2]. In the other hand, the Pt(100) shows superior electroactivity in the negative scan, characterized by a sharp peak centered at 0.65V. Although not shown in Figure 1, we investigated the successive cycles for the glycerol oxidation. We observed a continuous surface poisoning cycle after cycle evidence by the decrease of density current. This is evidence that some of the adsorbates formed during the cycles remains at the surface even at higher potentials. Some works [2,3] observed the presence of CO during the glycerol electrooxidation but there is a lack of information in relation of extensive electrolysis.

The glycerol electrooxidation is a field of research still to be explored since the reaction complexity is evidenced in this work. The main observation is the reaction surface sensitivity which can lead to produce different kind of products for different surfaces. It is particularly important if we want to use the glycerol as feedstock to produce more valuable products. 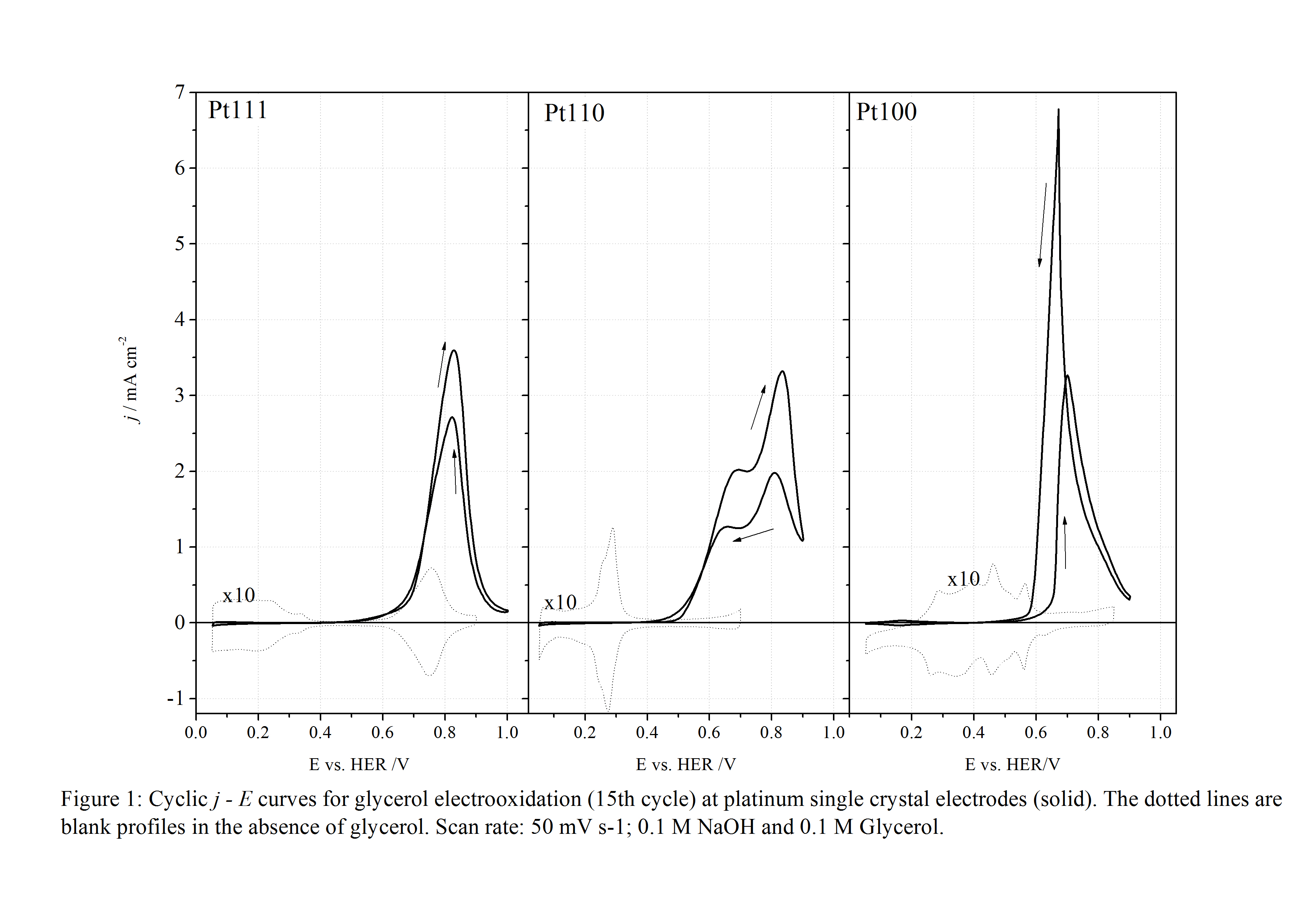