Non-invasive pressure / force measurements are needed in many applications involving human body, such as gesture and displacement analysis. They are particularly needed in medical applications for the monitoring of pressure fields, e.g. in the case of plantar lesion detection in neurodegenerative pathologies or in the case of the control of compression bandage therapy dedicated to chronic venous disorders. This type of applications features very demanding specifications. Indeed, they require the development of pressure field measurement devices which are accurate, reliable, easily wearable, and possibly biocompatible. To meet these requirements, polymer based micro-capacitive sensor arrays fabricated on flexible substrates are good candidates to let non-invasive as well as accurate stress measurements to be carried out. Since single-axis pressure measurements may be found incomplete in some applications, capacitive arrays featuring 3-axes pressure sensing capabilities are considered in this study. Here, a sensor array prototype featuring 25 element 3-axes micro-sensors is designed and fabricated. The principle of operation of the sensing array is based on the use of a two electrode networks facing one another and separated with a highly deformable dielectric polymer film (PDMS). In order to foresee the sensitivity of the designed sensors to the applied pressure, a thorough study of the mechanical properties of PDMS thin films is carried out both computationally and experimentally. According to this study, a 3-axes sensing array constituted of a network of top and bottom copper electrodes separated by a 100 µm thick PDMS film is considered. The electrode network is organized so that it constitutes 25 elementary 3-axes sensing units, which are addressed by means of a multiplexed row and column electrical connection system. Each unit is 5 X 5 mm2 large and is constituted of three single-axis capacitive sensors, the design of which being chosen so as to enhance the sensitivity of each single-axis sensor to the desired spatial component of the applied load and to reduce its sensitivity to the other components, while limiting the overall dimensions of the 3-axes sensing unit.  They are realized on a flexible substrate (Kapton) using PDMS as a deformable dielectric material, by means of an original transfer of film technique. It enables metallic electrodes to be deposited on deformable and weak adherence material such as PDMS. The fabrication process enables sensor arrays of up to 75 sensors to be realized with a transfer yield of 100%. The alignment of electrodes features an accuracy of 3%, and the fabricated load-free dielectric layer thickness exhibits a thickness accuracy of 5% in load-free conditions. In the realized sample the normal pressure sensors and the shear stress sensors feature 1.3 pF (measured: 1.2 pF) and 2 pF (measured: 2.2pF) load-free capacitances, respectively. Besides, preliminary electro-mechanical characterizations are carried out to estimate the force/pressure sensitivity of the realized sensors. To do so, a dedicated experimental test bench is set up. It includes a three-axis robot together with an integrated commercial pressure sensor (Honeywell micro-force gauge FSG15N) allowing monitoring normal loads on the sensors, a spring loaded set-up allowing the sensor to be linked to the force gauge, and a HP4192A impedance analyzer to measure the sensor capacitance. Preliminary experimental evaluations of the sensor array are presented. It shows that the capacitance changes under applied load up to 7 N are in the order of 10%. These results are discussed according to the expected sensitivity of the designed 3-axis sensor array. 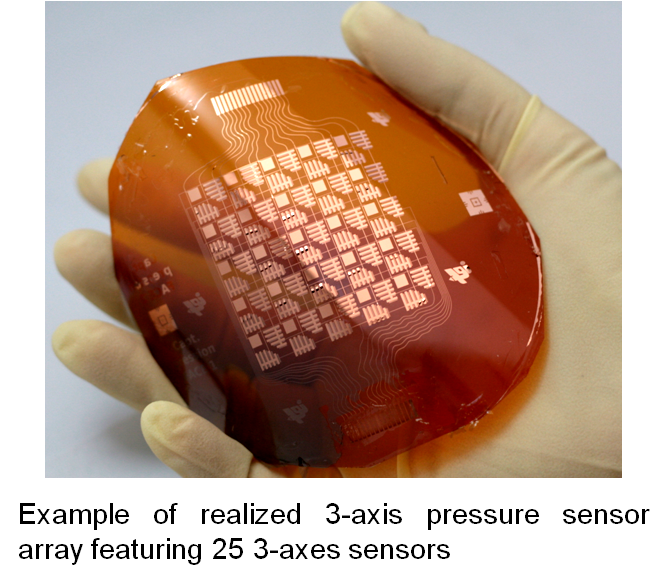