Recently, Sharabi et al. [2] have used an electrolyte containing LiPF6 with trimethylboroxine (TMB) and fluoroethylene carbonate (FEC) that allows maintaining a capacity of 100 mAh/g after 100 cycles for a LCP electrode. In our previous work [3], we have shown that i) TMB is oxidized to boron trifluoride (BF3), phosphorylfluoride (POF3) and carboanion (CH3-) and ii) a high amount of additive (>0.5%wt) in a cell results in a very bad stability. However, the role of TMB in the performance of LCP was not clearly identified.

Lithium tetrafluoroborate (LiBF4) was investigated as unique lithium salt [4] and as additive in LiPF6 containing electrolyte [5]. It was found that LiBF4 has good Aluminum passivation properties and improves the electrochemical performance of LiNi0.5Co0.2Mn0.3O2. In the presence of LiPF6 salt, LiBF4 is expected to form BF3 and lithium fluoride (LiF) [5].

In the present work, the effect of BF3 gas in the LCP performance is investigated through a comparison between TMB and LiBF4 as additive in LP30. Considering the amount of BF3 produced from the decomposition of both additives, the electrolyte containing 0.2%wt TMB, which presented the best electrochemical behavior [3], and an electrolyte with 0.4%wt LiBF4 are compared in Figure 1. Interestingly, for a theoretical similar amount of BF3 in the cell, LCP exhibits the same performance in both electrolytes.

An optimization of the amount of LiBF4 additive in LP30 electrolyte for LCP electrodes will be presented. The best results are obtained with a low content of LiBF4 (<3%wt). Secondly, OEMS [6] and CV experiments on LiBF4-containing electrolyte will confirm the decomposition of LiBF4 and the presence of BF3 during the oxidation scan until 5.2 V. Additionally, impedance experiments (EIS) will be shown and results will be compared to the data obtained in the case of TMB-containing electrolyte.

Finally, as LiBF4 is known to passivate the Aluminum well, the effect of TMB and LiBF4 on Aluminum and stainless steel used as current collector in Swagelok cells will be studied by SEM-EDX, XPS and ICP. In order to distinguish between the beneficial effect brought by a better current collector passivation and a possible layer formed on LCP, similar experiments will be performed in coin cells, which utilize a higher area of stainless steel in contact with the electrolyte.

This work was supported by BMW AG and we would like to thank S. Bretzke, S. Puravankara and T. Nilges (TUM) for the synthesis of the LCP material. 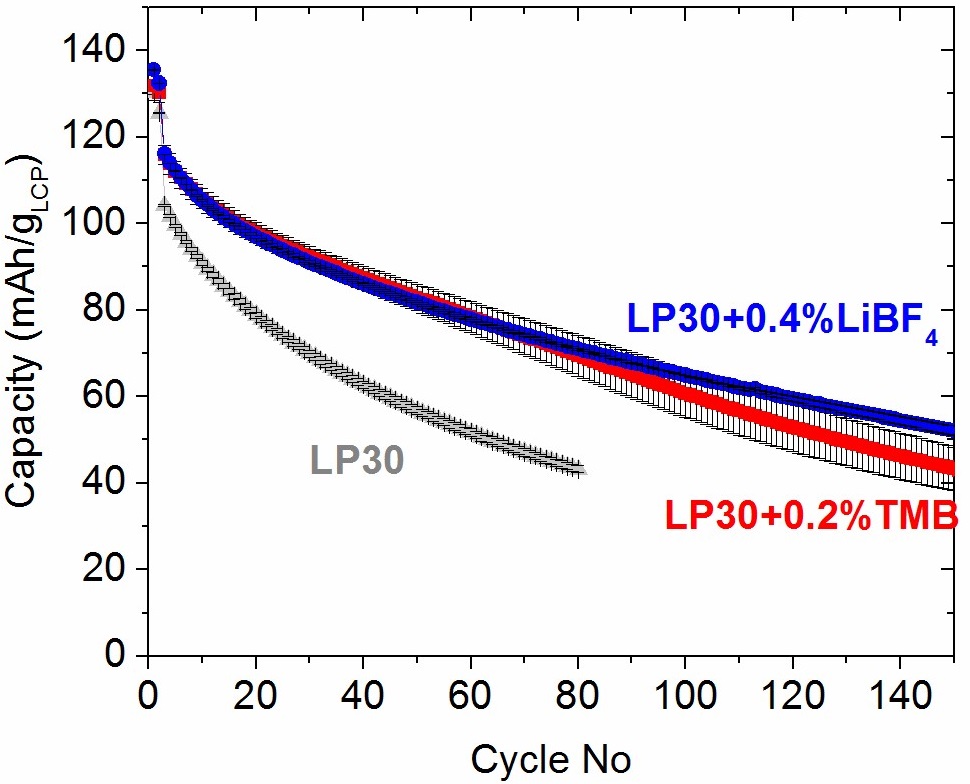