Liver cancer is first of the top ten causes of death in Asia. Abnormal concentrations of the breath volatile organic compounds (VOCs) are reported to correlate with unhealthy/injurious body/organ conditions; for instance, ammonia (NH3) gas for renal and liver disease. Therefore, the detection of ammonia concentration in exhaled breath more important. In this study, an indium nitride (InN) gas sensor of 10 nm in thickness has achieved detection limit of 0.2 ppm ammonia. The sensor has a size of 1 mm by 2.5 mm, while its sensing area is 0.25 mm by 2 mm and deposited with a 10 nm thick Pt film on the sensing window to investigate the effect of catalyst on ammonia gas detection, shown in Fig 1.

The ultrathin InN epilayer extensively enhances sensing sensitivity due to its strong electron accumulation on roughly 5–10 nm deep layers from the surface. Sensitivity is expected to be much better due to the natural electronic characteristics of as-grown InN films, including a narrow band gap, excellent electron transport characteristics (mobility > 1,000 cm2·V·s), a background high electron density (typically in excess of 1 × 1018 cm-3), and the unusual phenomenon of strong surface electron (charge) accumulation (1.57 × 1013 cm-2) for the InN films grown on AlN film on a buffer layer .

The current variation (DI) of a Pt-InN ammonia sensor under exposure to various ammonia concentrations from 0.2 ppm to 0.8 ppm in synthetic air at 200 °C is depicted in Fig 3. The experiments were repeatedly performed while the ammonia gas was turned on for 5 minute and off (i.e., in pure synthetic air) for another 5 minute at various ammonia concentrations. The current went up as ammonia concentration increased; such current increment was induced by the reduction of pre-adsorbed oxygen atoms. When ammonia molecules are introduced to the sensing system, the hydrogen atoms on dissociated ammonia molecules react with pre-adsorbed oxygen atoms, reducing the effects of surface depletion. Platinum as catalyst can increase output current signals as well as reduce response in comparison with Pt-InN, indicating that such an ammonia concentration can be analyzed in air. The dynamic responses of the Pt-InN sensor indeed demonstrate the great ability to sense ammonia gas at the sub-ppm level, and promising device for the realization of non-invasive ammonia sensing to detect ammonia in exhaled breath as a marker for liver disease. 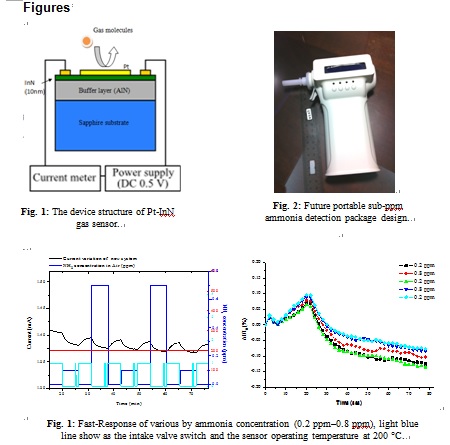